Since the end of World War II, the United States has played a unique role in the world. It defended war‐​ravaged nations, enabling them to rebuild, and led a global coalition during the Cold War. Today it continues to provide security for other nations against a number of threats, from a rising China to non‐​state actors such as ISIS and al Qaeda. Washington also tries to adjudicate disputes, much as a baseball umpire ensures that the players obey the rules of the game. The United States and the rest of the world have benefited, but it has come at a cost. The wars in Iraq and Afghanistan have caused millions of Americans to question the nation’s global role. A new documentary, American Umpire, explores how the United States assumed these responsibilities in the first place. Then, through a series of interviews with prominent policymakers, scholars, military leaders, and journalists, it considers possible options for the future. Writer and producer Elizabeth Cobbs will join us for a special screening of the film, followed by a discussion, with a distinguished panel of experts, of its implications for U.S. foreign policy. Please join us. 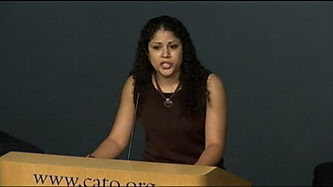