President Obama has made raising the minimum wage a centerpiece of his campaign against “income inequality.” In his most recent State of the Union Address, he called for raising the federal minimum wage to $10.10 per hour over the next 3 years. He also announced plans to unilaterally increase the minimum wage for federal contractors. Meanwhile, numerous governors are also pushing to increase their state minimum as well.

No doubt such proposals are politically popular. But the overwhelming body of evidence suggests that increasing the minimum wage would do little to reduce poverty or inequality. On the other hand it would almost certainly reduce employment opportunities, especially for those low skilled, entry level workers for whom a job represents the first rungs on the ladder of opportunity.

Over the last several years, Cato scholars have written on the pitfalls of raising the minimum wage.

Four Reasons Not to Raise the Minimum Wage 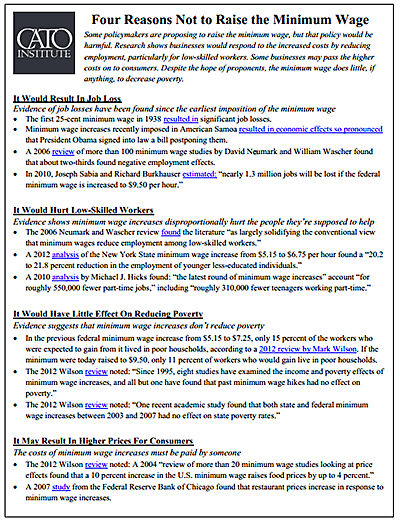 Downsize the Department of Labor
January 12, 2014

Mark A. Calabria discusses minimum wage on NPR’s Tell Me More
May 30, 2013