Texas law SB 4 imposes jail time on local police who fail to detain anyone whom federal Immigration and Customs Enforcement (ICE) requests. Data from Travis County, Texas, show that ICE targets large numbers of U.S. citizens. From October 2005 to August 2017, 814 targets of ICE detainers in Travis County—3.3 percent of all requests—claimed U.S. citizenship and presented officers with a Social Security number (SSN). ICE subsequently canceled or declined to execute about a quarter of those detainer requests. Based on statements from ICE officials, the best explanation for not executing these detainers is that ICE targeted at least 228 U.S. citizens in the county before canceling or declining to execute those detainers. SB 4 will likely increase the detention of U.S. citizens for supposed violations of immigration law by preventing local police from releasing them.

Applying the rate of wrongful detainers in Travis County to all detainers in the state of Texas from 2006 to 2017 implies that ICE wrongfully placed detainers on at least 3,506 U.S. citizens statewide. Other evidence shows that ICE regularly releases U.S. citizens after it executes a detainer, meaning that the true number of U.S. citizens initially targeted is likely even higher than that estimate. The fact that ICE often discovers its own mistakes only mitigates the harm inflicted on U.S. citizens wrongfully detained under the suspicion that they are illegal immigrants—and does not protect these jurisdictions from lawsuits under SB 4. Local law enforcement in Texas needs the flexibility to sort through these citizenship claims without the threat of jail time imposed by SB 4.

Every state and local law enforcement agency submits the names and fingerprints of arrested persons to the Federal Bureau of Investigation (FBI) to check for outstanding warrants. In recent years, the FBI has shared this information with ICE. If ICE wants to arrest someone in state or local custody, it sends the jurisdiction an I-247 Notice of Action Immigration Detainer Form (ICE detainer). The ICE detainer requests that the locality detain the arrested person for up to 48 hours after his or her expected release date to allow ICE to make an arrest. 1 Unlike with criminal warrants, an ICE agent can issue a detainer without first presenting evidence of probable cause to a federal judge. 2

In January 2017, Travis County Sheriff Sally Hernandez announced that the county would not hold people—excepting those charged with certain violent crimes—pursuant to a detainer unless ICE obtained a judicial warrant or court order. 3 In response, the Texas legislature passed SB 4. 4 It requires all state and local law enforcement agencies in Texas to comply with any ICE request. 5 SB 4 creates a Class A misdemeanor that imposes a term of up to a year in prison for any state official who does not honor an ICE detainer. 6 Travis County has again complied with detainers since September 2017. 7

SB 4 provides a very limited exception for people who can provide proof of their citizenship at the time of the detainer, but it can sometimes be difficult or impossible for detained U.S. citizens to obtain such proof while in custody. 8 In 2015, for example, ICE issued a detainer for U.S.-born Ricardo Garza; Texas jails in Grand Prairie and Dallas ultimately detained him for more than a month as he understandably had trouble obtaining a copy of his birth certificate from behind bars. 9

The state of Texas has argued that if it is reasonable for ICE to detain an arrestee on the basis of a detainer, then it is also reasonable for local officials to do so. 13 Even if ICE always issued detainers on a reasonable basis, this assumption is unwarranted because local officials often have additional information that could make it unreasonable for them to detain that arrestee on suspicion that he or she is an illegal immigrant. For instance, local officials may have access to the person’s personal history and may have had an opportunity to interview him or her. Texas officials regularly encounter the targets of ICE detainers who allege birth on U.S. soil as well as citizenship and so have an obligation to evaluate those claims on an individual basis.

This brief uses data on ICE detainers from the Travis County Sheriff’s Office in Texas, covering the period from October 1, 2005, through August 25, 2017. 14 The Cato Institute obtained the data through the Texas Public Information Act. Travis County collects citizenship information as a routine element of the booking process before ICE issues a detainer, which means that the citizenship claims are not made as a defense against a detainer. 15 If ICE investigates the detained person’s citizenship claim and determines that an ICE detainer subject is a U.S. citizen, it may issue a cancellation form, but that form does not record the reason for the cancellation. 16 At that time, Travis County records the cancellation as a “warrant withdrawn.” In other cases, ICE may simply decline to execute the detainer without a formal cancellation. 17 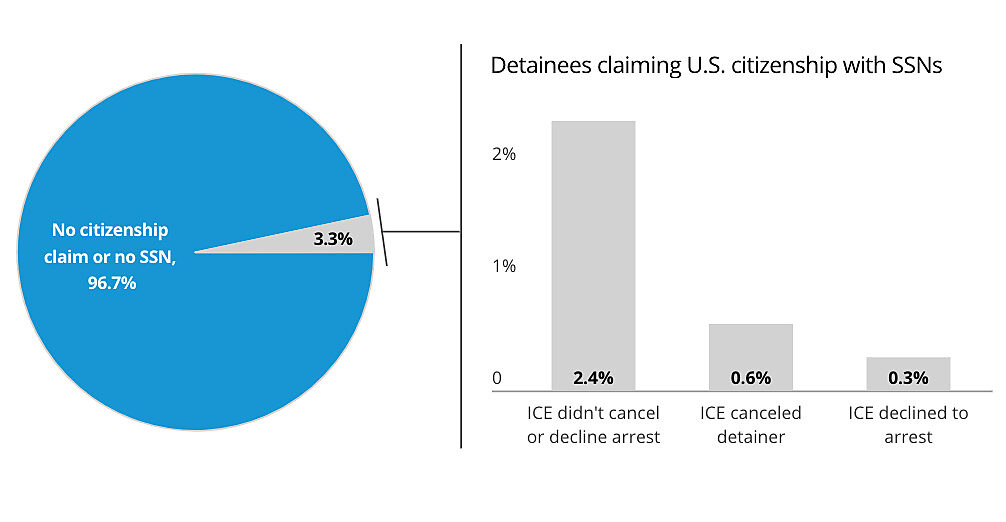 The best explanation for these unexecuted detainers is that ICE believed the detainees’ citizenship claims. ICE requires agents to investigate claims of U.S. citizenship before an arrest and to issue detainers based on the agent’s assessment of probable cause of deportability. Thus, it likely canceled or declined to execute these detainers because the detained individuals showed that they were, in fact, U.S. citizens. 20 As a result, ICE detainer subjects in Travis County who claimed citizenship and presented an SSN were nearly four times more likely to have detainers unexecuted against them than other detainer subjects were. 21 In court, ICE Supervisory Detention and Deportation Officer John Drane testified that he could think of only two reasons for a canceled detainer: the person was a legal permanent resident who did not have a conviction for a crime that would make him or her removable—inapplicable to people claiming U.S. citizenship—or the person was a U.S. citizen. 22

ICE issued 373,227 detainers in the entire state of Texas from FY06 through November 2017. 23 Applying the rate of 0.9 percent to the entire state implies that ICE wrongfully targeted 3,506 U.S. citizens in Texas. Nationwide, ICE issued 2,115,333 detainers during the same period, implying that it may have wrongfully targeted roughly 19,873 U.S. citizens nationwide with immigration detainers. This number includes only those who had their detainers canceled or unexecuted. ICE also arrested hundreds of people and then released them after discovering evidence of U.S. citizenship, meaning that these numbers likely underestimate the total number of U.S. citizens who were targeted by ICE. 24

Travis County has not released a list of individuals subject to detainers who claimed citizenship, but two cases are known. In 2017, Travis County arrested Arcane Tossou for spitting at an officer. 25 During booking, Tossou told the sheriff’s office that he had been born in Texas, but ICE issued a detainer for him anyway. 26 Legal documents from the county’s pretrial services list his place of birth as Texas. 27 A judge ruled Tossou incompetent to stand trial because of mental illness, and because the county declined to honor the detainer, he was able to obtain treatment at a local hospital. Had the detainer remained in effect, the county would have turned him over to ICE, which could have placed him in an immigration detention facility—an outcome more likely under SB 4.

Tossou is only one of at least a half dozen mentally disabled U.S. citizens targeted, detained, or deported by ICE in recent years. In 2008, for example, the agency issued a detainer for Mark Lyttle, who was born and raised in North Carolina and who suffers from a mental disability. 28 ICE detained him for two months before deporting him to Mexico. When he attempted to reenter, he was deported again. He lived homeless for months, eating from garbage and even being deported by Mexico to Guatemala. He later proved his U.S. citizenship and won a $175,000 court settlement. 29

The sheriff’s office also reported that after an ICE detainer error, it released Richard Renteria, a 20-year-old Austin resident arrested for public intoxication in August 2016. 30 Renteria, who speaks fluent English, told the arresting officers that he was born in Texas, but ICE issued a detainer for him anyway. 31 Travis County’s pretrial services also list Renteria’s place of birth as Texas and confirm that he provided an SSN to the sheriff. 32

Because of database errors, inadequate investigations, and other mistakes, ICE likely targeted at least 228 U.S. citizens in Travis County from FY06 to FY17. The rate of wrongful detainer issuances in Travis County implies that ICE targeted at least 3,506 U.S. citizens in Texas and 19,873 nationwide with detainers that were subsequently canceled. SB 4 requires Texas localities to hold U.S. citizens even if they assert a facially valid U.S. citizenship claim. The result will be more American citizens wrongfully detained for longer periods of time. At a minimum, supporters of expanded enforcement laws like SB 4 need to create better safeguards to protect the rights of American citizens from ICE detainers.

14 ICE’s own records on U.S. citizens targeted by detainers are inaccurate and incomplete. ICE’s records obtained by a Freedom of Information Act request show that 44 percent of the detainers have no resolution listed, and another 10 percent say “lifted” without explanation. Older ICE data is similarly incomplete. TRAC immigration with ICE data lists 834 U.S. citizens from FY 2008 to 2012 (0.08 percent of all detainers), but it is also incomplete. TRAC Immigration, “Who Are the Targets of ICE Detainers?” Syracuse University, February 20, 2013, http://trac.syr.edu/immigration/reports/310/; and Eyder Peralta, “You Say You’re An American, But What If You Had To Prove It Or Be Deported?” NPR, December 22, 2016, http://www.npr.org/sections/thetwo-way/2016/12/22/504031635/you-say-you-re-an-american-but-what-if-you-had-to-prove-it-or-be-deported.

17 Only since March 2017 has ICE required a cancellation: Immigration and Customs Enforcement, “Issuance of Immigration Detainers by ICE Immigration Officers,” Interim Policy no. 10074.2, March 24, 2017, https://www.ice.gov/sites/default/files/documents/Document/2017/10074-2.pdf.

18 Rhode Island Department of Corrections—one of the few jurisdictions to have made data public—reported an 8.9 percent rate of citizenship claims from 2003 to 2015 (with no mention of Social Security numbers). This is similar to the rate of 7.2 percent (1,739 people) for Travis County with and without SSNs. Morales v. Chadbourne (D-RI), “Exhibit 52,” November 13, 2015, https://object.cato.org/sites/cato.org/files/wp-content/uploads/rhodeislandcitizendetainers.pdf.

19 The numbers: 392 total USC releases plus 17 cancellations without a release minus 54 declined detainers resulting in a release.

31 Attorney Jackson F. Gorski, “Re: Richard Renteria,” Email to David Bier, September 26, 2017. “Also, he spoke English—otherwise I never would have been assigned his case.”

32 Conversation with Jordan Wise, September 22, 2017. Wise said, “According to our records, he is a citizen. The detainer was withdrawn.”