Increasing political polarization and rising conflict over identity, race relations, immigration, and LGBT rights have left the American political landscape with two increasingly divided extremes and a seemingly elusive moderate middle. Many Americans have come to view religious institutions as a major contributor to this ever‐​increasing divide — a catalyst for increased intergroup societal conflict rather than a possible cure.

In Religious Trump Voters: How Faith Moderates Attitudes about Immigration, Race, and Identity, Ekins finds that Trump voters who attend church regularly are more likely than nonreligious Trump voters to have warmer feelings toward racial and religious minorities, to be more supportive of immigration and trade, and to be more concerned about poverty. These data are important because they demonstrate that private institutions in civil society can have a positive effect on social conflict and can reduce political polarization.

On Wednesday, March 6, join a LIVE discussion on the moderating influences of religious faith on attitudes about immigration, race, and identity, and tweet your questions with #CatoConnects.

Send questions for Emily Ekins on Twitter with #CatoConnects or type your questions in the box below. 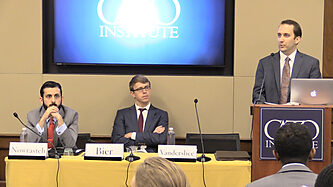