The world is a mess, but what will it look like a year from now? No one knows with certainty, but informed guesses can be made, in part, based on the direction of the economies in conflicted areas of the world. Global debt (including that of the United States) is now a higher percentage of global gross domestic product than it was before the Great Recession that began in December 2007, making the world increasingly vulnerable to a new financial crisis.

Below is a list of countries that are facing economic problems and foreign policy conflicts, with the exception of Switzerland — which is included as a benchmark for good government, and economic and personal liberty. At the other end of the scale in Europe is Ukraine. Ukraine is a large country with rich farmlands and plentiful natural resources, but since its independence from the Soviet Union more than two decades ago, it has been saddled with poor leadership and has been a cesspool of corruption. The result is that its per capita income is now a third that of Russia, and half that of Romania and Bulgaria, which were poorer than Ukraine at the beginning of the transition from communism a quarter-century ago. Russia, despite being weakened due to the drop in oil and gas prices and very limited sanctions, is still in a superior position to take the rest of Ukraine if Vladimir Putin so chooses.

Russia still has a few hundred billion dollars in reserves, on which it can live for a couple of years, while Ukraine is bankrupt and totally dependent on the dole from foreign friends and international institutions, such as the International Monetary Fund. Russia is highly corrupt, with only a semi-competent and equipped military, but is less corrupt than Ukraine and has a vastly superior military. It appears doubtful that the Europeans and the Obama administration will give the Ukrainians the amount of financial and military aid they will need to hold the Russians at bay, so the odds are that a year or so from now, Ukraine will have become a vassal state to Russia, much like Vichy France was to Germany in World War II.

Like Russia, Iran is being hurt by both the drop in oil prices and the economic sanctions that have been imposed on it. But Russia's and Iran's other neighbors allow plenty of leakage through the sanctions' walls. Also, like Russia, Iran has a relatively small government sector and debt burden, so it is in a position to tough out an economic decline until it gets the bomb. Even if the nuclear bomb talks break down, and if the United States and other countries impose tighter sanctions, the holes in the sanctions' walls are likely to grow larger rather than smaller. The United States could increase its level of economic warfare, primarily by hobbling the ability of Iran's banking system to clear international payments' transactions, but the Obama administration appears loath to do what would be necessary. The safest bet is Iran will do the minimum to keep at least sporadic talks going to avoid the harshest sanctions, while finishing up the work to produce nuclear weapons. A year from now, Iran well may have the bomb but will not necessarily admit it until it has a reasonable stockpile.

A half-century ago, Venezuela, along with Argentina, had the highest per capita incomes in South America — a crown now held by Chile. Despite its oil riches, real incomes are falling in Venezuela due to the rampant corruption and the imposition of economic controls. Venezuela has increasingly become a Cuban client state, with strong support from Iran and less so from Russia and China. With the decline in oil prices and the general economic mismanagement, the Venezuelan government is becoming increasingly authoritarian (with the help of the Cubans) and unstable. The Iranians and Chinese have some incentive to aid the Venezuelan government as a way of keeping and expanding their influence in Latin America. The open question is how much they will be willing to pay to support this loser. 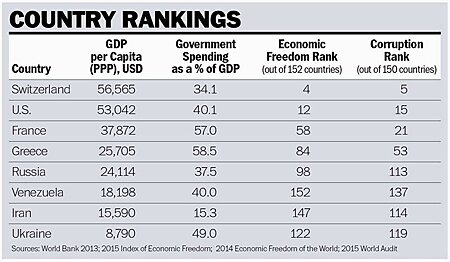 As with Venezuela, the Greeks have been enduring a loss in real per capita income. This will continue because the Europeans will only provide enough in debt relief and other aid to keep Greece from totally going under, and the new government will not make the necessary reductions in government spending and regulations — preferring as always to blame others. That is, Greece will continue to muddle on in a slow, continuing decline until real income and consumption are in balance.

The wild card is France, whose real debt is well over 100 percent of GDP, and rising. If a major flight of capital from France begins owing to financial or terrorist fears, given its large Muslim population, the results could be disastrous. France is too big to be bailed out by the Germans or others — and, as a result, it would likely trigger the next global financial crisis.