Skip to main content
Live Now
This article appeared in The Washington Times on February 3, 2014.
TOP

There are many signs that the world may be headed for a new economic slump, or worse. Which countries are best positioned to weather such a downturn and which are not?

Countries that have been fiscally responsible in the recent past are for the most part in better fiscal shape than those that have not, because they have a larger safety cushion.

Which countries are best positioned to weather such a new economic downturn and which are not?

In the accompanying table, I have ranked countries (the major economies, plus two good examples — Chile and Switzerland) on three fiscal variables. The first one is the net of their growth rate and deficit for 2013 (i.e., growth rate minus deficit).

For most of the major countries, their deficits were greater than their rate of economic growth, giving them a net negative number.

Government debt levels of more than 90 percent of GDP tend to slow economic growth because of the crowding out of private capital and the cost of debt service which, at some point, can spiral completely out of control. 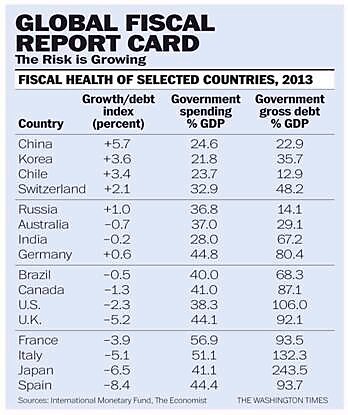 China, South Korea, Chile, Switzerland, Russia and Australia are all in good fiscal shape. China, as everyone knows, has made spectacular progress over the past 35 years, going from a poor country to a low‐​middle‐​income country.

However, with China, there are always questions about continued political stability. At the moment, the country is dealing with a debt bubble, which could greatly depress economic growth.

Russia is too dependent on natural resources, and a big decline in oil and gas prices and exports could cause a sharp drop in growth. As with China, there is political risk, as well as an unstable Ukraine next door.

Chile, Switzerland and Australia are solid democracies under the rule of law, with South Korea a bit less so. Chile’s growth is likely to slow somewhat as it moves a little to the left under its new president.

The Swiss and the Australians are both rich and sensible, and hence, even though they cannot avoid being harmed by a new global recession, they almost certainly will do better than most other countries.

India and Brazil were global investors’ favorites up to a year or so ago. During the good times, both allowed sloppy fiscal habits to re‐​emerge — too much wasteful spending, poor regulation and crony capitalism. Both are likely to do less well in 2014.

Germany and Canada are in good shape despite having too much government, but both countries have reduced the size of government in the past three years, which is largely responsible for their relatively good performance.

The Canadians always suffer from weakness in the U.S. economy, and the Germans are being pulled down by their fellow Europeans and a disastrous foray into green energy that caused energy prices to soar.

The United States, United Kingdom, France, Italy, Japan and Spain are in deep trouble. They all have way too much government and debt — and crony capitalism — and their debt burdens as a percentage of GDP continue to grow. This means slower growth, or worse, over the longer run.

None of these countries has the political leadership that appears to be capable of dealing with the entitlement problems they all face.

Italy, Spain and Japan have a demographic crisis, where the elderly, dependent population is rapidly outgrowing the number of workers. As a result, their economies are in a slow death spiral.

The world may luck out as it has for the past two years, but if the major economies do not soon get their fiscal houses in order, the risk will continue to grow. Then, the well‐​being of billions of people will go “poof.”