Skip to main content
Live Now
This article appeared in the Commentator on November 21, 2013.
TOP

There’s a joke in Washington that Democrats are the evil party and Republicans are the stupid party. Except this joke isn’t very funny since a lot of bad policy occurs when gullible GOPers get lured into “bipartisan” deals that expand government.

Consider, for example, all the tax‐​hiking budget deals – such as the “read my lips” capitulation of the first President Bush — that enable more spending.

In an ideal world, policy makers would focus first on desperately needed entitlement reform. But we don’t live in that world.

To be fair, sometimes Republicans are placed in a no-win situation. During the “fiscal cliff” discussions last year, Obama held the upper hand since he would get a huge automatic tax hike if nothing happened. So the final agreement, which resulted in a smaller tax increase, was actually better (or, to be more accurate, less worse) than I was expecting.

But in other cases, Republicans should prevail because they have the stronger hand. That’s the situation we’re in today with the automatic spending cuts known as sequestration.

The sequester, which resulted from the 2011 debt-limit fight, was an unambiguous defeat for Obamaand a significant victory for advocates of smaller government. And it was a defeat for all the lobbyists, special interests, and crony capitalists that get rich when there’s more money in Washington.

Though I don’t want to exaggerate. The “cuts” merely reduce the projected growth of federal spending.

But after years of unconstrained spending by both Bush and Obama, any fiscal restraint is a welcome development. Indeed, the sequester helps to explain why we’ve seen two consecutive years of lower spending in Washington for the first time since the 1950s.

No wonder Obama is desperate to cancel sequestration, even to the point of making himself a laughingstock to cartoonists.

But maybe Obama will have the last laugh because some Republicans are negotiating with Democrats to undo some of the benefits of sequestration. Here are some excerpts from a Politico report.

"...an agreement may not be so elusive after all. Hopes are growing that Ryan and Murray could reach a narrow deal to replace a portion of the automatic spending cuts known as sequestration, according to lawmakers and senior aides involved in the discussions. ...On Tuesday, several key lawmakers and aides said there was about a 50-50 chance, if not better, that a small deal could be reached — a much better prognosis than many had anticipated. Murray said in an interview Tuesday that she’s in “very good conversations” with Ryan. “The goal here is to replace sequestration with responsible spending cuts and revenue,” Murray said."

But we don’t need a vivid imagination to know what she means by “revenue.” The real question is why Republicans would be willing to “feed the beast” with more revenue, particularly when it means eviscerating the genuine spending restraint imposed by sequestration.

It even appears as if Republicans are willing to increase unemployment as part of a bad deal.

"House and Senate appropriators are putting major pressure on Murray and Ryan... Revenue raisers being discussed include increased Transportation Security Administration fees... As an extra bargaining chip, Republicans would consider including an extension of extended unemployment benefits, which expire on Dec. 28. ...Murray has made clear she won’t agree to any structural changes to Medicare or Social Security, particularly without significant revenue increases."

So let’s summarize this issue. Current law is the sequester, which is a big victory.

The big spenders understandably want to eliminate or weaken the sequester, and would be especially happy to get more revenue coming to Washington.

Paul Ryan and the other Republican negotiators have the upper hand since the sequester continues if there’s no agreement.

So we have to ask ourselves why GOPers are even bothering to negotiate. There are two possible answers.

1. The “stupid party” joke actually is an accurate assessment of mental ability and Republicans are easy to trick because of their developmental challenges.

2. Republicans pretend to be fiscal conservatives when talking to voters but secretly want to enable more spending by sabotaging the sequester.

I’m actually being a bit unfair. What’s really happening is that there are divisions inside the GOP. A majority of the Republican caucus presumably understands that they hold a winning hand and they’re content to maintain current law and let the sequester continue.

But the Republicans on the Appropriations Committee tend to dislike the sequester since it reduces their ability to spend other people’s money in exchange for political support. 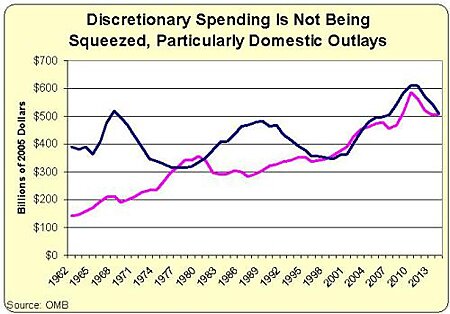 They correctly complain that America’s main fiscal problem is entitlement spending, so you can understand why they’re a bit irked that their programs are being restrained while boondoggles such as Obamacare are putting us deeper in a fiscal hole.

But that’s not an argument to waste money on so-called discretionary programs. Moreover, the appropriators are wildly wrong when they assert that appropriations spending already has been “cut to the bone.”

There are also some hawks who accurately complain that defense spending incurs a disproportionate share of the sequester, but they are wrong when they say this endangers national security. After all, defense spending still grows under sequestration and America will still account for nearly 50 percent of the world’s military spending.

So what’s the bottom line?

In an ideal world, policy makers would focus first on desperately needed entitlement reform. And I suspect many members of the Appropriations and Defense Committees would grumble a lot less about restraints on discretionary spending if real structural reforms to so-called mandatory programs were being implemented.

But we don’t live in that world. The sad reality of Washington is that genuine entitlement reform won’t happen with Obama in the White House. But that’s not an argument for surrendering on sequestration and allowing discretionary spending to climb at a faster rate.