Skip to main content
Live Now
This article appeared on The Federalist on August 18, 2015.
TOP

With the release of a new immigration plan, Donald Trump remains in the political spotlight and has been embraced by many Americans who truly believe that only he can restore American economic greatness and vanquish a corrupt political and corporate elite. Unfortunately, these Americans fail to understand that Trump’s claims about manufacturing, trade, and immigration are not only factually and morally bankrupt, but actually protect the politicians and cronies that he claims to be fighting.

Americans fail to understand that Trump’s claims about manufacturing, trade, and immigration actually protect the politicians and cronies that he claims to be fighting

Trump’s economic pitch can, I think, be fairly summarized as follows: On trade, he believes that (i) domestic manufacturing has been destroyed, crushing the American Dream in the process; and (ii) free trade and outsourcing are primarily to blame for this destruction. Trump’s immigration plan adds that an “influx of foreign workers holds down salaries, keeps unemployment high, and makes it difficult for poor and working class Americans ... to earn a middle class wage.” Any number of Trump’s speeches reiterates these points, harping on how China, Japan and Mexico are eating our lunch due to rich plutocrats and their idiotic, corrupt politicians who can’t — unlike Trump! — negotiate their ways out of a paper bag.

Reality, however, begs to differ. A full academic refutation of all of Trump's asinine claims is far beyond the scope of this piece, but here are a few key facts.

First, by almost every metric available, American manufacturing is thriving. 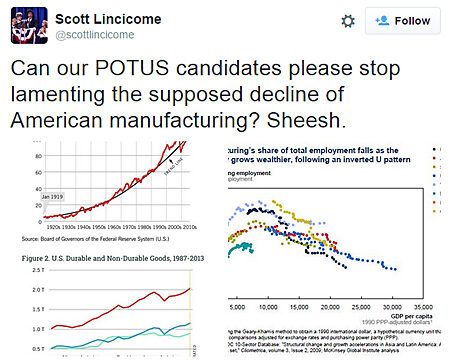 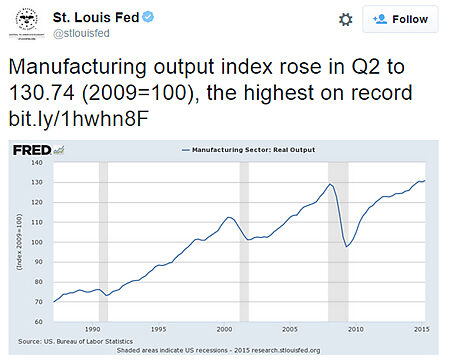 Second, the only U.S. manufacturing metric that isn't thriving is employment, but industrial job declines began in 1979 — long before FTAs were a thing and back when foreign imports were a tiny fraction of  the total GDP. These declines have continued through booms and busts, before and after NAFTA and China's entry into the WTO. They have also followed a well-worn path of economic development from agriculture to industry to services — a path already experienced by the U.S. with respect to agriculture, and one experienced by pretty much every other economy on the planet. 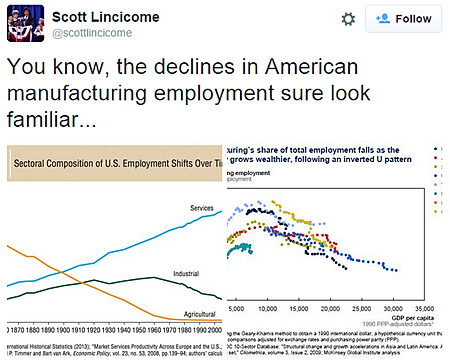 Moreover, the vast majority of U.S. manufacturing employment losses are due to productivity gains (think robots and computers), not trade or immigration. 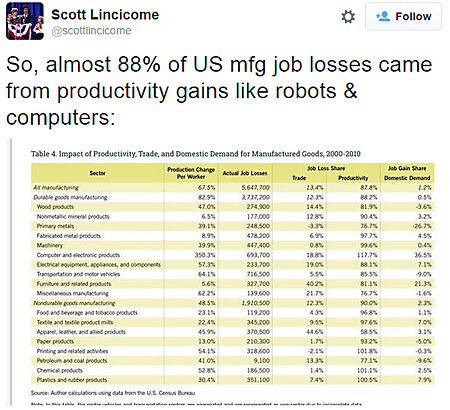 Indeed, according to the new study that provided the handy chart above, “Had we kept 2000-levels of productivity and applied them to 2010-levels of production, we would have required 20.9 million manufacturing workers. Instead, we employed only 12.1 million.” So much for blaming China and Mexico for those job-losses, huh?

Third, only a small fraction of the American economy is affected by foreign goods and services because most of what we consume — things like housing and health care — is domestic and, by its very nature, must stay domestic. For example, the San Francisco Fed has found that “the total share of ‘made in China’ goods in U.S. household consumption is just 1.9 percent” — far too small to have any major impact on the U.S. economy or American jobs. In short, there’s simply no economic way that goods and services from China, Japan, Mexico or any other country are major contributors to the overall American economy. And the same goes for exports and investment.

Fourth, although some American workers in trade-sensitive manufacturing industries are undoubtedly affected by import competition, they represent a tiny fraction of the overall U.S. workforce (recall that most Americans work in services), and trying to save them would cause serious problems. For one, shutting down trade, whether unilaterally or as a result of other countries’ retaliation, would hurt all of American workers and companies that currently benefit from open markets. 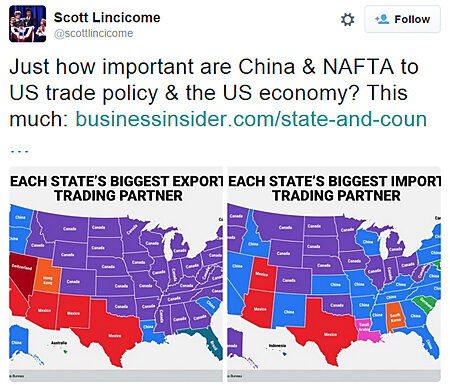 The imposition of U.S. tariffs and non-tariff barriers to imports (whether to pay for a border fence or to protect American workers) would also cause prices for essential goods to skyrocket, crushing U.S. consumers, especially the poor, in the process. 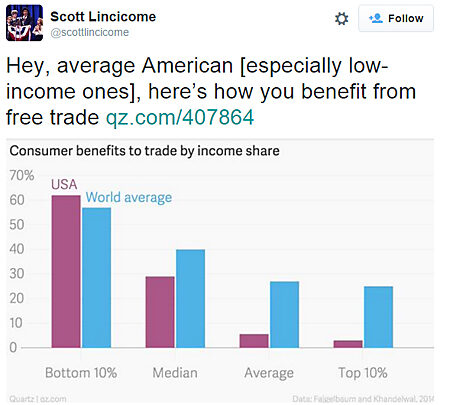 Maybe sometime Trump can explain how taxing American families to pay for a border fence or to support a tiny fraction of all U.S. workers will #MakeAmericaGreatAgain. Seems pretty off to me.

Finally, there's immigration and wages. Beyond the fact that study after study shows that immigrants do not depress native wages, particularly over the medium- to long-term, the use of government force to artificially raise some workers' pay is conservative apostasy in every context except, it seems, immigration. For example, conservatives rightly decry minimum wage laws and forced unionization rules, noting that such policies are both ineffective (e.g., leading to black or grey market work, automation or cuts in benefits/hours) and immoral (e.g., raising retail prices, or causing job-losses among vulnerable groups while enriching cronyist union members).

They also rightly shriek at the thought of new, costly swarms of IRS, EPA or other government agents interfering in private business contracts to enforce Obamacare and other onerous regulatory boondoggles. But, for some reason, many of these same conservatives reject these facts and principles when the subject turns to legal immigration and trade. Indeed, a quick review of the economic section of Trump’s immigration plan reveals many of the same non-market mechanisms — wage controls, “hire American” requirements, and supply restrictions — that conservatives oppose in almost every other context. That section does not, of course, mention the fiscal cost or economic reality of Trump’s restrictionist plans.

These facts only scratch the surface of Trump’s economic illiteracy. But I think they get the point across (more here, if you’re really interested).

Yet despite Trump’s ignorance, there is no doubt that he has tapped into a real sense of economic insecurity among Americans across the country, particularly those in areas like the Rust Belt who have suffered from decades of needless decline. The Washington Post’s Dave Weigel recently found many of these folks during a campaign stop in Michigan — good, honest people weakened by years of deindustrialization and starving for political leadership and economic salvation. Many, though not all, thought Trump — and his fight against the corporate and political elite who were supposedly outsourcing America’s future — might finally have the answer.

The bitter irony of this support, however, is that Trump's economically ignorant message prevents real reform and serves to protect the very leaders who got folks in Michigan and elsewhere in their current predicament. Indeed, the American political landscape is littered with union leaders, CEOs and, of course, politicians who falsely blame foreign trade and immigration for the awful-but-totally-expected failures produced by their anti-market policies. Policies that, rather than embrace and harness economic dynamism, doom workers and constituents to a life of slow decline and increasing government-dependence.

Such decline and dependence, however, are far from inevitable. Leaders in states across the south and west have limited their own political power, accepted the realities of globalization, and adjusted to them by embracing free(r) markets; lighter regulation; a clear, consistent legal regime; and, yes, international trade. The results can't be clearer: states across the Sunbelt like Texas, as well as energy powerhouses like North Dakota, are leading the U.S. recovery, even expanding manufacturing, and are consistently atop the national rankings in terms of business, jobs and prosperity. 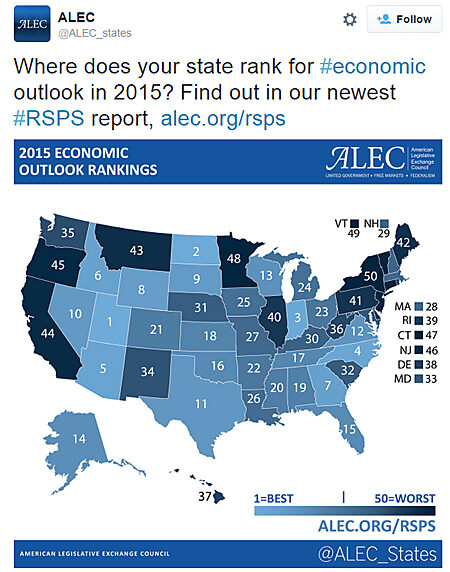 Buoyed by free market policies, these states are also attracting boatloads of foreign investment — again, even in manufacturing. 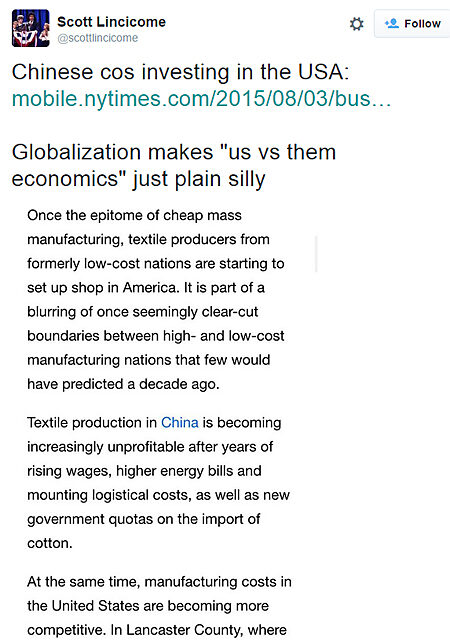 Texas is a particularly important story, as it's one of — if not the — most trade- and immigration-exposed state in the country. Yet, despite (or because of) its ample exposure to the southern border that Trump and others want walled-off, Texas is dominating economically — even after the oil crash — due to its embrace of free market policies, NAFTA and free trade more broadly. 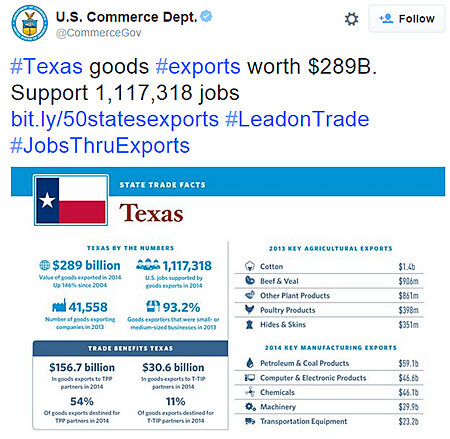 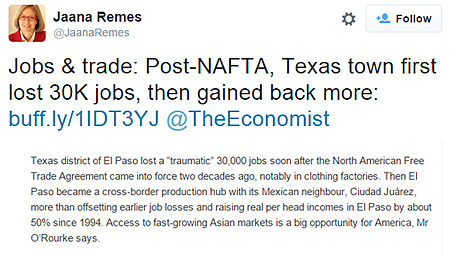 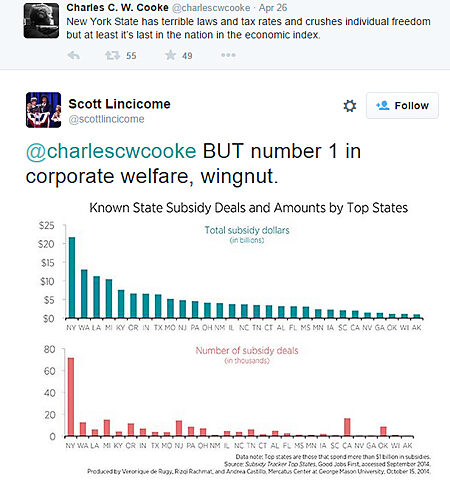 Similar policies pervade at the federal level and cause immense damage to American families, companies and workers. For example, we have:

Politicians and business and union leaders who support these policies — whether at the state, local or federal level — are often quick to note that if it weren't for those dastardly foreigners, their high taxes and Big Government programs would, like, totally have worked. One such leader is none other than former Michigan governor — now Berkeley professor and Hillary Clinton adviser (of course!) — Jennifer Granholm, who long scapegoated foreign trade in order to hide the unceasing wake of misery that her favorite government programs left in Trump's recent campaign stop.

Granholm certainly isn't alone. Despite the fact that statist policies hurt U.S. companies and workers, distort markets and breed economic stagnation, the political, corporate and union elite in many parts of the country fight to keep them in place — likely because many of them directly benefit from keeping the state's hand on the tiller. And by wrongly obsessing over trade and immigration, as well as helicopter rides and hashtags, Trump will help these political elites avoid real free market reforms and much-needed scrutiny for their repeated failures.

Michigan voters finally booted Gov. Granholm. According to Weigel's piece, Michigan's current governor, Rick Snyder, seems to understand that the way to real economic salvation comes not from a bitter, ignorant and immoral combination of statism and nativism, but from an optimistic embrace of free markets and the inevitability of globalization, similar to what Texas and other states implemented long ago. By contrast, Trump stands in the middle of the ocean and, instead of building a boat, promises to make the waves stop. Sadly, there are many Americans gasping for air, so desperate for hope and failed by their leaders that they're willing give Trump a try. They'll inevitably discover, however, that his xenophobic, anti-market policies will not only cause them to sink even further, but let their leaders get away with tethering them to the ocean floor.