Skip to main content
Live Now
This article appeared in The Washington Times on March 19, 2013.
TOP

Which country will serve as the trigger for the next financial crisis? Given the continuing rise in debt‐​to‐​gross domestic product (GDP) ratios in many countries, it is apparent that a new financial crisis will occur. Most of the speculation has been about when, rather than where. The most likely candidates are heavily indebted countries with a large growth deficit. The growth deficit is the difference between expected GDP growth and the expected government spending deficit as a percentage of GDP.

The financial crisis is likely to result in a totally justified flight from most government bonds, including those of the United States, which will set off a self‐​reinforcing cycle of unfundable rises in interest payments.

The academic argument is about whether the government spending multiplier is less than one (as most classical-Austrian school economists think) or greater than one (as the Keynesian economists think). In a new paper that reviews the empirical evidence and studies (Policy Analysis No. 721, Cato Institute), professor Andrew T. Young concludes: "Given weak evidence of significant short-run benefits, it is hard to justify stimulus spending packages in light of the almost certain and large long-run costs."

Massive deficit spending has not worked, as advertised, for a number of years in the countries listed in the accompanying table. All of them are at risk of even more financial shocks and stresses, and none of them seems politically able to make the degree of necessary change to solve the mess. Thus, it is most likely that one of them will serve as the location where the next global financial crisis is triggered. (Countries such as North Korea and Iran could also trigger a global financial crisis by starting a war.)

The crisis in Greece has now gone on for four years, yet the Greek government continues to run deficits, courtesy of German taxpayers. The Greek economy continues to shrink, and as a result, many people are highly stressed, civil society is breaking down, and worse is yet to come. This is bad news for the Greeks, but their economy is small enough that they are unlikely to be the trigger. The same thing can be said for the Portuguese and the Irish. Both countries have small enough economies to be bailed out by their fellow Europeans. 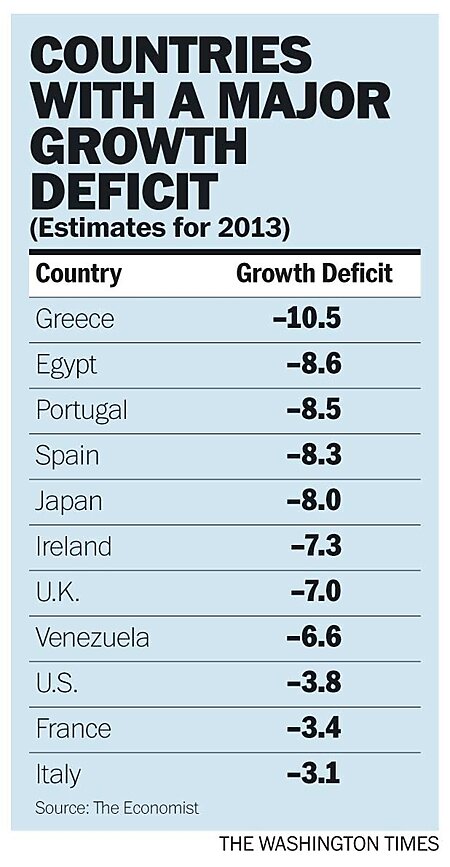 Egypt is not normally thought of as a risk to the world economy, but its economy is in dire shape. It has a big population, more than 80 million, and the growing economic stress is likely to lead to even more political instability, which could easily overflow into other Arab states.

Japan has suffered from two decades of stagnation. It has the highest debt-to-GDP ratio of any major country (well in excess of 200 percent), and a demographic crisis so acute that more adult diapers than baby diapers are sold. The government has appointed a new head of the central bank whose stated goal is to inflate the economy as a way of trying to spur growth. For many reasons, it is doubtful that the new strategy will work. One can easily envision a scenario where the necessary rise in interest rates gets outside the control of the central bank.

The Spanish government, working with the other eurozone countries, has made some progress in putting its fiscal house in order, but it continues to fall short. Italy has a much larger debt than Spain, but a better short-term fiscal situation. However, the lack of political leadership in Italy does not bode well. Both countries are too big to be bailed out and are suffering a demographic crisis. The long-run situation is dire.

The French and British economies are now dead in the water, and the current economic policies in both countries give little hope for improvement. The French have been understating their debt, and it would not take much for a financial meltdown to begin in France, and only slightly less so in Britain.

The Obama administration and the Senate Democrats are in denial about the spending problem in the United States and can block any major reduction in spending growth. The United States still has the world's reserve currency, and because the economic situation is worse in Europe and Japan, money still continues to flow in — but this is only temporary. Thus, the financial crisis is more likely to be triggered elsewhere, resulting in a totally justified flight from most government bonds, including those of the United States, which will set off a self-reinforcing cycle of unfundable rises in interest payments.

In most countries, tax rates are already above the revenue-maximizing rate, and the heavily indebted countries will be unable to issue new debt. These countries will be then forced to move to pay-as-you go spending policies, resulting in far smaller government sectors. As painful as it will be in the short run, as any bankruptcy is, it will set the stage for a new growth cycle.