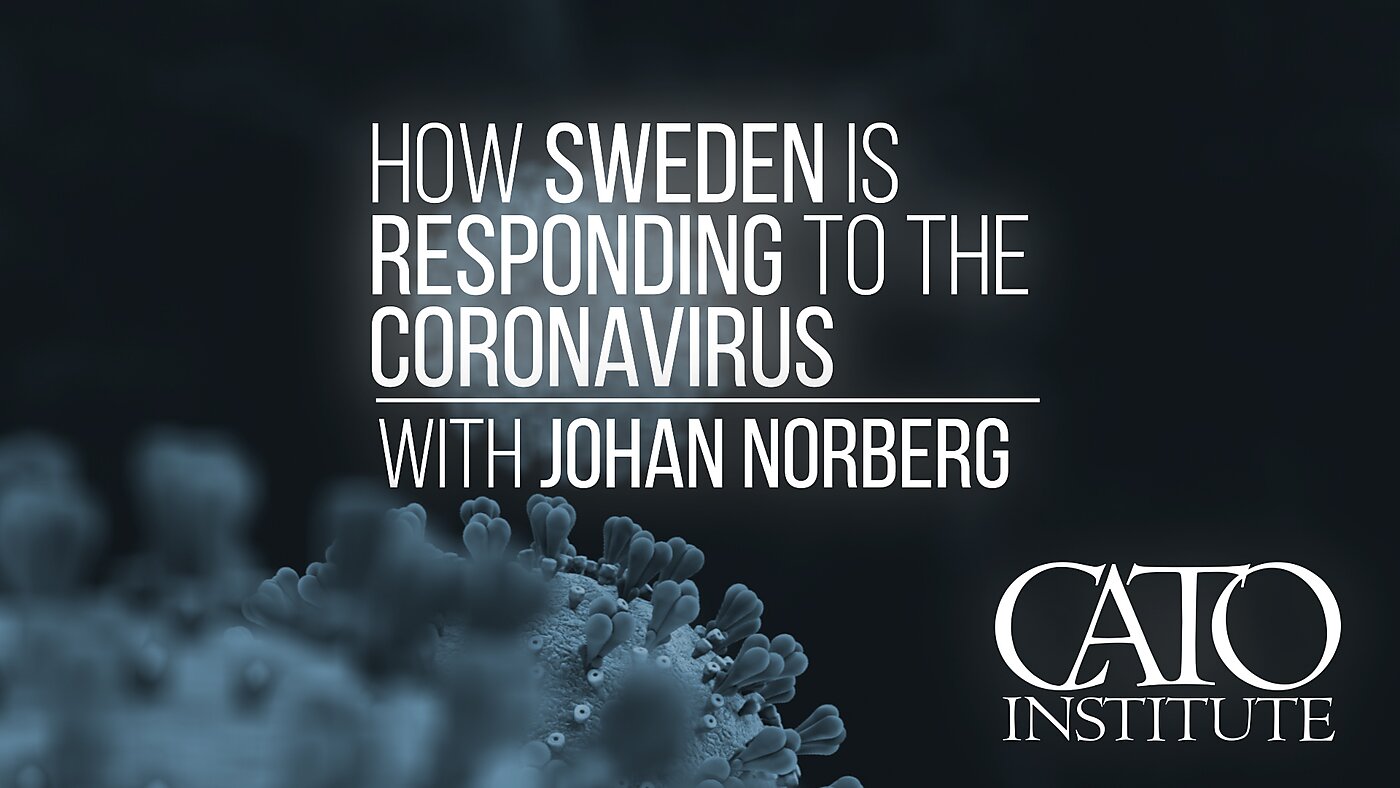 WATCH: How Sweden is Responding to the Coronavirus

Watch Cato Senior Fellow Johan Norberg report on what is happening in his home country of Sweden.

Views diverge on Sweden’s unique strategy of not closing borders and shutting down schools, workplaces, restaurants, libraries, gyms and shopping centers. The Swedish government has declared no state of emergency and no orders to shelter in place. Young Swedes are even encouraged to continue with their sports training and events.

Some Brits think that we Swedes are crazy, The Spectator’s Fraser Nelson told Swedish radio last week, but added that other Brits admire how the Swedish people have largely followed scientific advice—no mandatory lockdown needed.

One reason why some believe Sweden is a disaster zone while others see it as a role model is that currently available data can be interpreted many different ways.

There’s a lot of debate over the Swedish model of coronavirus response, but there are good reasons to think a Hippocratic approach to policy may pay off.

For example, the number of deaths as a share of total cases is a useless statistic, since countries have completely different testing regimes. It is at best an indication of a country’s testing capacity and how many people with more mild cases are being tested—an area where Sweden has not impressed.

Those who want to show how great Sweden is doing have produced charts comparing us to countries like Britain, Belgium, France, Spain, and Italy. Those who want to prove the opposite replace those countries with Norway, Denmark, and Finland, all of which have fewer deaths.

The truth is that Sweden is somewhere in the European middle when it comes to deaths per capita, which in itself is interesting. We are outliers in terms of policy, but not in terms of outcomes.

There are also reasons to think that Sweden is doing better than these comparisons suggest. Many countries don’t count COVID-19 deaths outside of hospitals. When people die at home, in nursing homes, or in prisons, they don’t show up in the coronavirus death count.

In the Stockholm region of Sweden, 42 percent of deaths took place in nursing homes for the elderly. In many countries, and some U.S. states, those deaths would not show up in the data.

This has a major effect on where you are compared to other countries. According to Johns Hopkins University, Belgium has twice as many COVID-19 deaths per capita as the Netherlands. But in Belgium, almost half of those deaths are from nursing homes, while testing is more rare in Dutch nursing homes so fewer deaths there are attributed to the disease.

After France started to include nursing homes in the statistics, the total number of French COVID-19 deaths jumped by almost a third.

While some Swedish regions have also underreported nursing home deaths, there are good reasons to believe we count deaths more accurately than many other countries. Sweden is a statistics powerhouse—we have had a disturbingly nosy government since long before the United States even existed. Every Swede has a 10‐​digit personal number. It is similar to a Social Security number, but it’s mandatory and we have to identify ourselves with this number, validated by an ID card, during every contact with authorities and doctors.

There are obvious downsides to having the government make lists and find out who’s naughty and nice, but in the present context, one benefit is that we know with good confidence who has died.

During the present pandemic, Sweden systematically checks the list of people who have tested positive for the virus against the population register. Every time the government discovers that someone who had the virus has died, that person is registered as a COVID-19 death if it happened within 30 days of the diagnosis—even if the cause of death was cancer or a heart attack.

It means that Sweden reports the number of people who die with COVID-19, not of COVID-19.

Even in a culturally and geographically similar country like Norway—celebrated for its low death rate—they do things differently. The Norwegians only count something as a COVID-19 death if a doctor concludes that someone was killed by the disease and decides to report it to the country’s public health authority.

This means that we have to wait a long time for more detailed data on deaths and specifically excess deaths—those who would not have died from something else close in time—before we proclaim victory or defeat.

No matter how we count, though, I assume that Sweden has had more COVID-19 deaths per capita than our Nordic neighbors. But that is an obvious result of those countries’ decisions to postpone cases and deaths by locking down whole societies for a period of time. The thing to watch is what happens when they begin to open up again and will face a new wave of COVID-19. No government can keep people locked up until we have a vaccine, and most are now loosening restrictions.

A Harvard model projects that a 60 percent suppression of the disease will result in a higher peak later on and a higher number of total deaths than a mitigation strategy like the one Sweden used, where the spread is reduced by no more than 20 or 40 percent, so that the disease can pass through the population to create herd immunity during a period when the vulnerable are protected. Other models come to other conclusions, of course, depending on what you put into them. We just don’t know yet, and only time will tell. Herd immunity might yet beat herd mentality.

Sweden’s strategy would have been considered a failure if it had resulted in a peak of cases so high that the health care system had become overwhelmed and people who could have otherwise been saved died from lack of care. We are nowhere close to the end of this, but the models and pundits that predicted this outcome happening as early as late March were wrong.

The Swedes who have died from the coronavirus did not die due to lack of hospital beds or ventilators. Thanks to a rapid increase in intensive care unit capacity, 20 percent of Sweden’s ICUs are unoccupied. Stockholm has built a new field hospital, already equipped to receive hundreds of COVID-19 patients, including 30 ICU beds. So far it has not had to open. The average age of the dead has been 81, which is close to our average life expectancy.

And it seems like the disease is now slowing down in Sweden, not speeding up. The number of COVID-19 patients newly admitted to the ICU has been relatively stable since March 23, and since people are also getting better and leaving the hospital, the total number of patients in ICU treatment is declining somewhat, at least for the moment.

The number of deaths in Sweden has been in slight decline for more than a week. We must be extremely careful in interpreting such recent trends, but at least it is far from the exponential increase many feared.

Why has Sweden done so much better than many predicted? Because others failed to see that society could respond voluntarily to the pandemic. For example, the influential Imperial College model estimates a higher reproduction rate of the disease in Sweden than in other countries, “not because the mortality trends are significantly different from any other country, but as an artefact of our model…because no full lockdown has been ordered.”

In other words, the model could only handle two scenarios: an enforced national lockdown or zero change in behavior. It had no way of computing Swedes who decided to socially distance voluntarily. But we did. You have probably seen pictures of crazy Swedes in crowded restaurants, defying sanity and the international consensus, but chances are you saw the same pictures of the same restaurants at that particular evening when it was indeed crowded—had the camera pointed toward a different part of the same restaurant, it would have shown many empty tables. Swedes, though imperfect, have generally done a good job of voluntarily self‐​isolating.

Swedes have reduced their mobility substantially, even without police enforcement. For example, cell phone data shows that the inhabitants of Stockholm reduced their trips to the most popular Swedish holiday destinations during Easter by around 90 percent.

This means that our economy still hurts despite more liberal policies (even apart from the fact that export‐​dependent Swedes suffer from lockdowns in other places). We are not going to shops and restaurants like we used to. But losing two‐​thirds of your revenue rather than 100 percent might mean the difference between life and death for many entrepreneurs.

We are nowhere close to the end of the pandemic. Perhaps Sweden will do worse long term, and then we’ll have some serious self‐​examination ahead. Or perhaps Sweden is the one place that is succeeding in limiting long‐​term damage, caring for the sick, and protecting the vulnerable, all while working toward herd immunity.

We don’t know whether the Swedish model is better or worse yet. What we do know is that Sweden has not cracked down on basic liberties like others have, and has not wrecked society and the economy to the same extent.

As Hippocrates might have put it, “First, do no harm.”

Johan Norberg is a senior fellow at the Cato Institute and a writer who focuses on globalization, entrepreneurship, and individual liberty.