Here’s what I wrote last month about the fiscal situation in Illinois.

Illinois is a mess. Taxes and spending already are too high, and huge unfunded liabilities point to an even darker future. Simply stated, politicians and government employee unions have created an unholy alliance to extract as much money as possible from the state’s beleaguered private sector. That’s not a surprise. Indeed, it’s easily explained by the “stationary bandit” theory of government. But while the bandit of government may be stationary, the victims are not. At least not in a nation with 50 different states.

Looking at this grim situation, the state legislature decided it had to act.

Unfortunately, the politicians in Springfield decided that action meant stepping on the accelerator while driving in the wrong direction. Democrats in the state legislature (joined by some big‐​government Republicans, just like in Kansas) just overrode Governor Rauner’s veto and imposed a huge tax hike on a state that already has one of the nation’s highest tax burdens.

In the case of Illinois, it’s almost as if the state exists to enrich a cosseted class of state and local bureaucrats.

This will hasten the state's collapse.

Here's what I said earlier this week about the prospect of another tax hike in the state.

I specifically want to highlight something I said about halfway through the interview about the burden of government spending in Illinois compared to regional competitors.

Here's a chart I prepared based on data culled from the Census Bureau. As you can see, per-capita outlays are higher in Illinois than in neighboring states. In some cases, thousands of dollars higher. 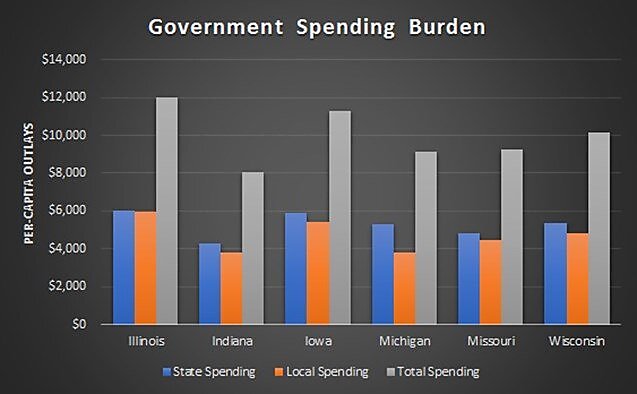 Given this data, I'd like to ask the people of Illinois the same question I asked an audience in Paris when comparing France and Switzerland. What exactly are you getting for all that money?

Instead, the money gets diverted to the pockets of the various interest groups. In the case of Illinois, it's almost as if the state exists to enrich a cosseted class of state and local bureaucrats.

In Illinois, Democrats spent the long weekend coaxing Republican legislators to join their suicide pact to raise taxes to plug a $6 billion deficit… And don’t forget the $130 billion unfunded pension liability none of which will be solved by the $5 billion tax hike. …The state legislature is controlled by public unions that refuse to compromise. …Pensions will consume about a quarter of Illinois’s general fund this year. Nearly 40% of state education dollars go toward teacher pensions, and the state paid nearly as much into the State Universities Retirement System last year as it spent on higher education. Anemic revenue and economic growth can’t keep up with entitlement spending. The state’s GDP has ticked up by a mere 0.8% annually over the last four years compared to 2% nationwide and 1.4% in the Great Lakes region. Since 2010 more than 520,000 Illinois residents on net have fled to other states.

And Jonathan Williams of the American Legislative Exchange Council also opined on the mess in Illinois.

…the focus should be on fixing the state’s big‐​government policy prescriptions that are killing economic growth and opportunity. It should come as no surprise that businesses and citizens continue to leave the Land of Lincoln in droves. The credit rating agencies are right to question Illinois’ ability to pay its bills, as the tax base flees to other states.

…When the rosy accounting assumptions are stripped away, Illinois has a dismal 23.77 percent funding ratio, $362.6 billion in total amount of unfunded liabilities. That staggering number represents an unfunded pension liability of $28,200 for every man, woman and child in Illinois. …one might assume the state government is not bringing in enough revenue and merely needs to raise taxes. This is simply false. According to Tax Foundation’s analysis, Illinois’ taxpayers pay the 5th highest combined state‐​local tax burden in America.

…It should come as no surprise, then, that nearly 700,000 Illinois residents left from 2006–2015… Only New York and California experienced higher levels of domestic out‐​migration during the same period.

The bottom line is that this latest tax hike will cause more productive people to leave the state. Politicians in the state also will have an excuse to postpone much‐​needed reforms of the state pension system, which is the primary threat to long‐​run solvency. And government, which already is too big, will become an even bigger burden.

P.S. At some point, I need to write about Indiana, a state that quietly has amassed a very good track record of fiscal prudence. Especially since it’s about to benefit from an influx of tax refugees from its neighbor to the west.