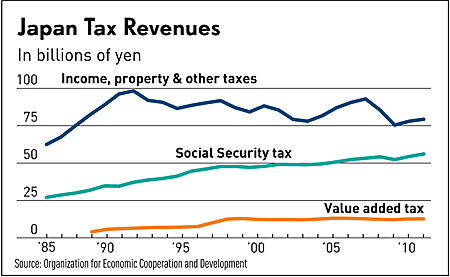 Despite all the media buzz about Prime Minister Shinzo Abe's effort to boost the economy, the first two arrows of Abenomics missed their target.

Some observers appeared deceived by the fact that consumers rushed to stockpile goods before April, when the consumption tax was increased.

That created an illusory spike in first-quarter GDP, and in inflation, that some mistook as progress. Yet household spending collapsed once the consumption tax went up — by 4.6% in April and by 8% in May.

An endless series of failed “fiscal stimulus” schemes have nearly quadrupled the taxpayers’ national debt from 64% of GDP in 1991 to 240% today.

If gargantuan budget deficits stimulated economic growth, then Japan, Greece, Egypt and Venezuela would now be the fastest‐​growing economies in the world.

Quantitative easing might have contributed to a greater devaluation of the yen, but most of the yen’s tumble had already happened since October 2011.

The weaker yen may have helped raise inflation (and thus lower real wages), but it also had the very harmful effect of inflating the cost of production for Japanese industry — notably, the cost of oil, metals and other imported raw materials priced in dollars.

The third arrow is really a bunch of darts — 249 regulatory reforms, some potentially useful yet scarcely decisive. An April report from the Organization for Economic Cooperation and Development makes the “Third Arrow for a Resilient Economy” sound promising, even though “the tax and social security systems … create work disincentives for secondary earners.”

The OECD’s forecast of GDP growth “around 1.25%” through 2015 seems a weak endorsement, depending as it does on stronger foreign growth to “support the (modest) expansion.”

Instead of shooting antique Keynesian arrows into the ground, Japan needs heavy artillery.

As every other Asian nation has demonstrated, the big gun for economic expansion is cutting marginal tax rates on both individual and corporate incomes.

But about all that is being done in Japan is to raise the consumption tax (VAT) from 5% to 8% in April and to 10% next year, while doubling the tax on capital gains and dividends this year to 20.3%.

The Japan Cabinet Office’s Tax Commission even submitted a “tax reform proposal” last year to raise the top tax rate to nearly 56%. That would be economic suicide.

But lower taxes on corporate profits can’t fix the lost buying power a higher VAT inflicts on the customers and employees of Japanese companies — whose prosperity largely determines whether firms have any profits to tax.

The first increase in the VAT in April made Japanese consumers 3% poorer; the second would make them 5% poorer.

How could anyone expect that to jump‐​start demand?

What has been missing from Abenomics is the fourth arrow — namely, a pro‐​growth tax strategy. Japan has long needed a tax system focused on improving incentives to work, invest, immigrate and innovate.

At a speech in Tokyo on April 6, 1998, I noted: “From 1989 to 1992, Japan added more taxes on sales (VAT), land, capital gains, dividends and interest. Yet the dramatic deterioration in economic growth after 1990 is rarely blamed, even in part, on those simultaneous changes in tax policy.”

I demonstrated that “revenues were no higher (as a share of GDP) in 1995 than they had been in 1980, despite 15 years of bracket creep, a new VAT and new taxes on interest income, capital gains and land.… The marginal tax burden in Japan is unusually high, yet average tax revenues are relatively low.…High tax rates and weak revenues are symptoms of an inefficient tax system.”

Nothing changed. Like France, Japan is still a country with unusually high income tax rates and unusually low income tax revenues. Because of Japan’s punitive tax rates, not despite them, taxes on incomes and profits recently amounted to only 8.9% of GDP in Japan compared with 11.6% in the U.S.

The biggest difference between the two countries is payroll taxes, which total 11.9% of GDP in Japan and can take more than 28% from a Japanese worker’s paycheck.

As the graph shows, when tax rates are demoralizing and suffocating, the economy stagnates and so do tax revenues.

The line at the top of the graph depicts Japan’s revenues from all taxes on individual income, corporate profit, property and a few other (mainly excise) taxes.

Amazingly, taxes on income, profits and property have fallen for many years, even though the economy grew by about 1% a year and income tax rates were not significantly reduced.

Despite increased revenues from in Social Security taxes and VAT, Japan’s overall tax receipts of 135.5 trillion yen in 2011 were no higher than they were back in 1991, just before the Lost Decade(s) began.

So far, sustained growth of tax revenues in Japan has been entirely dependent on growth of Social Security taxes.

Repeated increases in payroll taxes for health and retirement benefits drive a widening tax wedge between what employers pay for labor and what employees receive, after taxes.

That tax wedge contributed greatly to Japan’s shrinking labor force since the mid‐​1990s.

The rationale for the VAT was that it would raise total government revenues over time and pay for growing benefits to retirees and others. But the graph shows that VAT receipts have been small and unchanged since 1998.

This year’s increase in the VAT is expected to add just 5.1 trillion yen to revenues, if it doesn’t crush the economy. Such estimates wrongly assume that a higher VAT will have no adverse effects on revenues from income, payroll, property and other taxes.

That is impossible. As I warned in 1998, “Any variety of sales tax must reduce sales, and therefore reduce personal and corporate incomes that would otherwise have been generated in producing and selling goods and services that are no longer marketable (because the VAT has raised their prices).”

In short, the first three arrows of Abenomics are either well‐​proven failures (fiscal stimulus) or unrelated to the defining task of raising the quantity and quality of labor and capital (monetary mischief).

To add a faster and stronger arrow to his arsenal, Prime Minister Abe could take a clue from almost any other country in Asia.

All of the dynamic Asian economies leapt from economic lethargy to rapid growth after slashing top individual income tax rates as low as 15% in Hong Kong, 20% in Singapore and 26% in Malaysia.

China imposes a seemingly high top tax rate of 45% on labor income (though few seem to pay it), but virtually no payroll tax and only 15%-25% on capital and business.

If Japan hopes to compete with its supply‐​side neighbors in the global market for capital, enterprise and skill, it cannot possibly do that with individual tax rates as high as 50%-56%. A top tax of 38%-40% would not be ideal, but would surely attract and retain more entrepreneurial energy.

To compete will require deep cuts in Japanese spending and subsidies, and much flatter tax rates.