Skip to main content
Live Now
This article appeared in The Washington Times on March 12, 2013.
TOP

The head of the Obama White House National Economic Council, Gene Sperling, who is a lawyer, has been claiming that “all economists” agree that sequestration will cost 750,000 jobs. I am an economist with a doctorate from Columbia University, and I don’t agree. The fact is that most classical and Austrian school economists also don’t agree (including many Nobel laureates), because they understand that U.S. government spending is well above the optimum for economic growth and job creation, which means that less government spending will create more jobs, not fewer.

It is true that sequestration and a reduced growth rate of government spending can cost a few jobs in the government sector, but this will be more than made up by the additional job growth in the private sector. Back in 2009, the folks in the Obama administration and their Keynesian allies in the economics profession told us that a big increase in government spending, which is what they obtained (more than 25 percent in real inflation‐​adjusted terms), would result in big job growth with less than 6 percent unemployment and more than 4 percent real economic growth by now.

The notion that reduced federal spending will cost jobs is nonsense.

The key figure is federal spending as a percentage of gross domestic product. The more the government spends, the less remains for the private sector. As the public sector grows as a percentage of GDP, then, the private sector and private jobs shrink as a percentage of GDP. Since 2010, the federal government share of GDP has been declining at a very slow rate, and private-sector jobs have been increasing at a slow rate. Sequestration will result in a small, continuing drop in the federal sector. Hence, private-sector jobs should continue to increase at a modest rate.

The Republicans should use the continuing resolution and the budget cap to force a further slowdown in the growth of government, and thus, less federal spending as a share of GDP. This should result in even more private-sector job creation, provided that there is restraint by the administration on all the new job-killing regulations. (Note: Even though the federal government is shrinking as a share of GDP, its absolute size continues to grow and, even with sequestration, federal spending will be greater this year than last.) 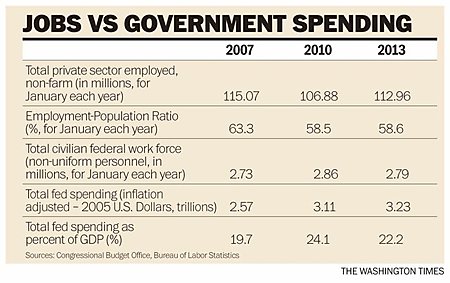 Private businesses strive to increase productivity to stay competitive, which increases everyone’s standard of living and frees up workers to go to more productive jobs. Many more jobs have been created in the new high-tech industries than have been lost in the steel and auto industries because of private-sector productivity gains. Government, however, does the opposite. For instance, from 1992 to 2009, the number of full-time public school employees increased 2.3 times faster than the number of students, yet test scores did not improve. Like education, many activities in government have negative productivity (which makes everyone poorer). The best government can do is create one government job for each job it kills in the private sector. Because government is so inefficient, it in fact kills more than one job in the private sector for each job it creates in the public sector — a statement supported both by empirical evidence and sound theory.

Sequestration requires some government departments to make modest reductions in spending — from less than 1 percent to 5 percent. Almost every organization has some unnecessary fat, government in particular. Human beings naturally are prone to increase costs faster than revenues, so most private businesses go through periodic cost reductions without impairing the businesses. Because of their monopoly status, governments do not have the pressures to keep costs under control that private businesses and households do, so they tend to get sloppier and more wasteful. Having seen the inside of government, I doubt there is a federal government agency that could not provide the same level of real service with a 10 percent reduction of spending (if not 30 percent).

No business would seek to punish its customers because of the necessity of reducing cost. Businesses cut out the frills first — unnecessary travel, excess inventory, washing the windows every month, etc. If government were run like a business, any manager who cut basic services — such as keeping parks open, providing emergency medical services, and even conducting White House tours — before getting rid of redundant programs, excess inventories and land and facilities would be fired.

Perhaps some organization will do a public service by identifying government managers — by name — who, in response to sequestration, cut higher-priority activities rather than lower. The taxpayers would then have a list of people who should be fired for incompetence or mean-spiritedness, which could save much money.