Skip to main content
Live Now
This article appeared on The Washington Times on November 30, 2015.
TOP

Tegucigalpa, Honduras — Why has Honduras lagged behind its neighbors and much of the rest of the world? It is resource‐​rich, has deep‐​water ports both on the Caribbean Sea and the Pacific Ocean, is very scenic and, because of its mountain terrain, has sub‐​climates that meet most people’s preferences.

As can be seen in the accompanying table, Honduras compares poorly with neighboring countries and some other countries of similar size. Guatemala next door has a per capita income roughly 50 percent higher, Costa Rica three times higher, Chile five times higher, and Switzerland and Hong Kong about 12 times higher than Honduras’. Honduras lags and suffers because of the lack of the rule of law and economic freedom. 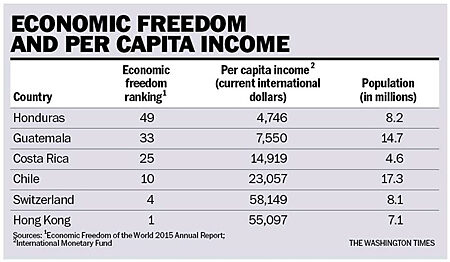 Honduras is, unfortunately, well-known for having the highest murder rate in the world. In cities such as San Pedro Sula, drug gangs engage in open warfare on each other. The relatively good news is that the violence is seldom directed against tourists, legitimate business people and professionals, even though property crime is high.

The genuinely good news is that Honduras has a relatively small government, comparatively low taxes, and manageable government debt. It has free-trade agreements with 40 countries, accounting for about 1.5 billion people, so it is an attractive location for many export-oriented businesses. The financial sector and monetary system are both reasonably stable and well-managed.

The regulatory system is uncertain with too many corrupt bureaucrats and judges. There is extensive underemployment in part due to the corruption and counterproductive labor laws and regulations.

The Honduran ZEDE experiment is a part of the attempt to not only catch up with its neighbors but to surpass them.

Despite its problems, the ills that plague Honduras are known and fixable. Former New York Mayor Rudolph Giuliani demonstrated that crime and murder rates can be quickly brought down with smart policing and a determined political leadership. (New York City has approximately the same population as Honduras.) Honduras should move to “e‐​government” as Estonia did a couple of decades ago under the leadership of Prime Minister Mart Laar to quickly get rid of much of the corruption. Corrupt and incompetent judges need to be fired, and even be temporarily replaced with some respected foreign judges as some countries have done. Former Chilean mining and labor minister, Jose Pinera, was the architect of the reform of Chile’s social security system and subsurface property rights regime, which were key ingredients in Chile’s rush from a poor to a developed country. Honduras ought to adopt much of the Chilean model.

Honduran President Juan Orlando Hernandez, his predecessor and the Honduran Congress have supported the creation of free zones within Honduras as demonstration projects to show the benefits of free markets and the rule of law in creating well‐​paying jobs and economic growth. The first of these zones will be operational within the next couple of months. They are known as ZEDEs, meaning Zone for Employment and Economic Development.

The approval and operational rules of each ZEDE are provided by an international committee known as CAMP (Committee of Best Practices). In order to provide international credibility and independence, the majority of the CAMP members (of which I am one) are non‐​Hondurans, drawn from nine countries. An American ex‐​pat and free‐​market political evangelist, Mark Klugmann, Honduran lawyer and former government official Octavio Sanchez, Executive Secretary of the Cabinet Ebal Diaz, and former President Ricardo Maduro were instrumental in the design and selling of the ZEDE concept. The ZEDEs will be able to create their own infrastructure — plus fire, police, medical facilities and civil court system (using the British common law system rather than the Honduran administrative law system if they so choose). The ZEDEs can also allow choice in currency. In essence, each ZEDE will operate as a free city — devising most of its own rules, regulations and structure to make it economically attractive to foreign investors. If they work as envisioned, they will be major employment generators and free of corruption, and thus serve as a role model for the rest of Honduras.

There are many recent examples of countries — and relatively free economic enclaves around the world — achieving very high economic growth rates for a sustained period of time. There is no reason why Honduras cannot make the necessary changes to become a high‐​growth country, with the doubling of real incomes every decade or so, quickly becoming a developed (and safe) country. The Honduran ZEDE experiment is a part of the attempt to not only catch up with its neighbors but to surpass them.