Skip to main content
Live Now
This article appeared in The Washington Times on February 11, 2014.
TOP

Why worry about Ukraine? To many, it seems far away and a country about which they know little.

News clips of the recent violent demonstrations in Kiev have occasionally appeared on the news shows, but most Americans have shown little interest. Yet Ukraine has the very real possibility of setting off the next financial crisis.

The crisis scenario is as follows: Russia is Europe’s major gas supplier. About half of that gas is sent through pipelines that cross Ukraine.

The countries of central and southeastern Europe, including Italy, receive virtually all of their Russian gas via Ukraine. The economies of many of these countries are showing very little growth. Even a temporary disruption of Russian gas supplies as a result of the pipelines being sabotaged is likely to throw them into a recession.

Given the very high debt level in Italy, a recession almost certainly will cause a new banking crisis, which will spill over into the rest of the European Union. Unlike Greece and Ireland, Italy is too large for the Germans to bail out. The renewed European financial crisis will then cause new problems in the United States and Asia. 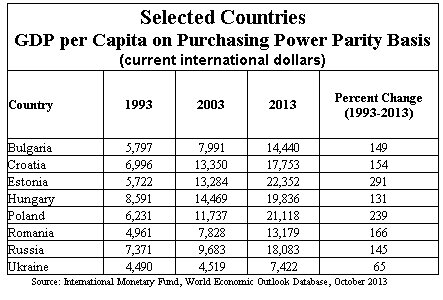 As can be seen in the accompanying table, Ukraine has had by far and away the worst economic performance of the former communist countries of Eastern and Central Europe and Russia.

The growth in real incomes has been less than half that of Russia, and barely more than a quarter of that in Poland. While most people in the other countries have seen a substantial rise in their real purchasing power over the past 20 years, conditions in Ukraine are not much better than in the old Soviet days.

The people of Ukraine are well aware that others have done much better, and as a result, the resentment has been growing.

The second reason is that Ukraine is more of an artifice of political expediency than a country with natural borders and a common language. Most people in western Ukraine speak Ukrainian and identify with Europe, and most in eastern Ukraine speak Russian and identify with Russia. Before the collapse of communism, Ukraine had only enjoyed a few years of independence (in the past 300 years) right after World War I, before the Soviets took over the country.

Even after the Germans were defeated at the end of World War II, a Ukrainian resistance movement against the Soviets continued up to the 1950s. In fact, Nikita Khrushchev gained his Politburo seat and, ultimately, control of the USSR because he was successful in forcibly putting down the Ukrainian resistance in western Ukraine. The Russians then sent Russian citizens to western Ukraine as a way of helping to control the population.

The third reason is that the current government of Ukraine is run by people who have more in common with a criminal mob than a representative democracy.

President Viktor Yanukovych was twice imprisoned for robbery and assault as a young man. He has fake academic degrees and an Army officer’s rank despite never having served in the military. His eldest son, a dentist, is reported to have become one of the richest men in the country in just a couple of years. When Mr. Yanukovych was asked about it, he merely said his son “is very smart.”

Ukraine has gone from a communist state to a semifascist crony-capitalist state — increasingly modeled after Vladimir Putin’s Russia. The Ukrainian parliament has been passing more and more restrictive legislation on civil liberties, including criminalizing “slander” of the state, which can mean any criticism.

These factors have fueled the demonstrations, which have been largely peaceful, despite acts of violence by the government, including the killing of a few demonstrators. Given the anger of many and the fact that the opposition is neither well-organized nor unified, the probability of a low-level civil war and increased number of terrorist incidents is growing.

Mr. Putin has made no secret of his desire to see more Russian control of Ukraine. He has succeeded, through a combination of bribes and threats, in forging a closer relationship. The Europeans have been timid, as usual, in standing up to the Russians and the excesses of the Yanukovych regime.

This appeasement is likely to embolden Mr. Putin after the end of the Olympics, when he will no longer feel the same need to play nice with the rest of the world and, most of all, the Europeans.

An increase in violence is likely. This makes increased Russian involvement more likely, which is likely to beget even more violence. The Europeans and the Obama administration will do no more than talk until refugees start flooding into the EU countries, and by then it may well be too late.