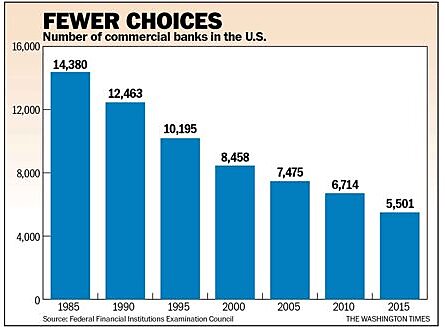 Most people understand that competition is good in that it results in better products at lower cost and more choice. Yet the government has been destroying financial market competition, increasing consumer cost and reducing choice. In 1921, the United States had 31,000 commercial banks, and now we have only 5,500 for three times the population. Part of the reason for the decline in the number of banks is due to natural market forces, such as mergers, to gain the benefits of economies of scale and to allow banks to have nationwide branch banking, both of which benefit consumers. But another major reason for the reduction in the number of banks, particularly in recent years, has been the cost of bank regulation, which puts small and community banks at a severe competitive disadvantage. In fact, no new banks have been charted since the beginning of the Obama administration. The massive increase in regulatory costs has resulted in fewer and more costly bank services for the consumer.

Regulations on banking and the rest of the financial industry are developed and enforced by the Federal Reserve, the Office of the Comptroller of the Currency, the Treasury Department, the Internal Revenue Service, the Justice Department, and now even the Department of Labor. Officials in the Obama administration at the Department of Labor are attempting a power grab with the claim (without providing supporting evidence) that financial advisers may be ripping off their customers by putting them in investment funds controlled by their own companies (which may actually be a good choice) and charging them commissions on the purchase and sales of funds and other products.

This is a real failure in fiduciary — and moral — responsibility.

Most investors need investment advice. Professional financial advisers need considerable schooling given the complexity of financial markets, products and regulations. And, like other professionals, they need to be paid for their services. It may take a financial adviser no more time to advise and service a client with a $10 million account than a client who has a $50,000 account.

Under the proposed Department of Labor rule, many small investors will be unable to get investment advice and education for their Individual Retirement Accounts since the companies would no longer be able to cover the cost by charging commissions on many of the transactions. Small investors would be forced into index funds (which may or not be appropriate for a given investor) or pay a negotiated fee for investment advice, which is likely to increase the overall cost for the small investor, causing some of them to go without needed guidance. A number of members of Congress have written to Secretary of Labor Thomas Perez in opposition to the proposed rule, noting the “regulation will reduce access to investment options and increase cost for retirement savers” and that the “proposed rule is hopelessly complex, confused, and in its current form, unworkable.”

Yes, a few investment advisers may not be fulfilling their fiduciary responsibility to their clients, but there are already plenty of laws on the books to take care of this problem, if the existing intense competition in the industry is not sufficient. Yet every day, government fails in its fiduciary responsibility to spend taxpayer money wisely. Perhaps if the administration spent more time making sure that the Veterans Administration, the Office of Personnel Management, the IRS and others are well managed and not corrupt, rather than taking on a largely non‐​problem and turning it into one, Americans would be better off. It is as if a guy from the mafia comes and tells you that for a big fee, he is going to protect you from the carwash overcharging you.

If the administration is so concerned about the cost of financial services to consumers, why has it persisted for more than two years in forcing a global regulation (the Foreign Account Tax Compliance Act, or FATCA) on banks and other financial institutions, which has had the effect of making it almost impossible for millions of Americans living abroad to obtain bank accounts without prohibitive cost? As in the proposed Department of Labor regulation, the administration has failed to do a cost‐​benefit analysis of the FATCA regulation, even though it will likely cost millions of jobs and hundreds of billions of dollars in needed foreign investment. This is a real failure in fiduciary — and moral — responsibility.