The basic function of government is the protection of person and property, and the United States is losing ground both in absolute terms and relative to other countries on this basic measure of liberty.

Last month, the Economic Freedom of the World annual index for 2014 was released, as was the 2014 edition of the International Property Rights Index. Despite slightly different methodologies, both indices were very close in their global rankings of property-rights protections.

Economic freedom and civil society depend upon a high degree of protection of person and property. In 1980, the United States ranked No. 1 in the world in protection of person and property, in the Economic Freedom of the World Report. Legal structure and the security of property rights in the nation continued to increase until 2000, even though the U.S. ranking fell to No. 9 as other countries improved more rapidly. Unfortunately, the past decade has seen a sharp decline in the rule of law and protection of private property in America, both in absolute and relative terms compared with the rest of the world, with the United States now having fallen to a dismal 28th place, even below France.

The Nordic countries, along with New Zealand, Switzerland and Singapore, lead the pack, with Venezuela at the bottom. In the International Property Rights Index, countries in the top quintile “show a per-capita high income approximately twelve times that of the bottom quintile.” It is no surprise that both of the indices show a very strong correlation with protection of property rights and gross domestic product per capita. As noted in the Economic Freedom of the World report, “The key ingredients of a legal system consistent with economic freedom are rule of law, security of property rights, an independent and unbiased judiciary, and impartial and effective enforcement of the law.”

The United States has seen an erosion of legal and property protections, in part, because of the “war on terrorism,” in which security concerns have overridden the protection of liberty. The financial crisis and “Great Recession” caused Congress, the administration and, most importantly, the courts to set aside basic rights of bondholders, as in the General Motors bailout, and of stockholders, as in the AIG case, as well as others. 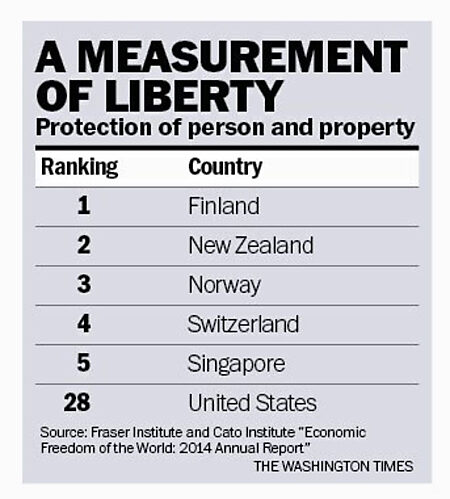 Too many judges have been timid or worse in upholding the words of the Constitution by claiming that it is a “living document” and should be interpreted in light of the needs of the times (which, of course, is totally subjective). A Constitution that is a “living document” in essence means there is no Constitution. America’s Founders quite correctly understood that the real danger to liberty and property was the government, not the random lawlessness of some individuals. Thus, the American Constitution was designed to limit government. Those judges who have stretched the original meaning of the Constitution to accommodate their own prejudices or beliefs are, in effect, destroying it as an instrument to restrain government. The Supreme Court was unable to find a way to justify the government forcing citizens to buy something they did not want in the Obamacare decision until Chief Justice John Roberts decided to redefine the purchase requirement of medical insurance as a “tax,” which the authors of the legislation said it was not.

Congress has delegated much of its constitutional lawmaking power to independent regulatory agencies, which consistently and blatantly flout the Constitution — notably the Internal Revenue Service and the Environmental Protection Agency, which regularly engage in “takings” of private property. These and other agencies have produced so many pages of regulations that no one can understand them, let alone know if they are in compliance. Such complexity and lack of clarity mean the law cannot be known and, hence, the rule of law no longer exists.

Congress and the courts have allowed lawmaking power to shift to the executive in the form of “executive orders.” In recent years, presidents have gone well beyond the debatable limited purpose of most executive orders, which were designed to make a legislative mandate more functional. Presidents have increasingly used executive orders to make law, as exhibited by President Obama’s many changes to the Obamacare legislation, such as changing dates of implementation and making exclusions well outside the written legislation.

A particularly egregious bit of lawlessness has been the abuse of the Justice Department by Attorney General Eric Holder Jr. When he took the oath of office, he swore to uphold the Constitution and the law. Instead, he decided not to uphold some laws that he did not like — ignoring civil rights violations by blacks while aggressively pursuing such violations committed by whites — which denies equal justice. He ignored his obligation to turn over records to appropriate congressional committees, resulting in a contempt-of-Congress citation. Mr. Holder has also corrupted the Justice Department by his failure to go after those in the administration for wrongdoing, notably the IRS, for leaking tax returns and targeting conservative groups, while at the same time going after critics of the administration, including members of the news media.

If the new Congress does not reverse this tide of government lawlessness, both our liberty and prosperity will be destroyed.