Way back in 2010, I shared two very depressing numbers to illustrate how Obama’s policies were creating “regime uncertainty.”

Some folks in Washington think that companies should act like charities and give workers lots of money simply because that’s a nice way to behave.

I shared data on the cash reserves of companies and suggested it was bad news that those firms thought it made more sense to sit on money rather than invest it.

I also shared numbers on the excess reserves that banks were keeping at the Federal Reserve and speculated that this was because of a similarly dismal perspective about economic prospects.

At the time, I figured that those numbers eventually would get better. But I was wrong.

Companies are still sitting on the same amount of cash and banks have actually increased the amount of money they have parked at the Federal Reserve.

Now let’s look at some more data that doesn’t reflect well on Obamanomics.

The Federal Reserve Bank of Cleveland has some very discouraging analysis about worker compensation.

“… real wages have barely risen—real compensation per hour has risen only by 0.5 percent, much less than at this point in past recoveries. The lack of strong wage growth has been one factor that has held down the growth of income, consumer spending, and the recovery. … Some longer‐​term changes in the economy have likely played a larger role in depressing real wage growth. …Productivity growth in the nonfarm business sector has averaged only 1.46 percent since 2004 and 0.85 percent since 2010. As the growth of labor productivity is a key determinant of real wage growth in the long run, the slowdown of productivity has probably helped to depress wage growth.”

And here’s a chart from the article.

The brown line at the bottom is what’s been happening under Obamanomics. As you can see, compensation has basically been unchanged for the past five years. In other words, living standards have stagnated. 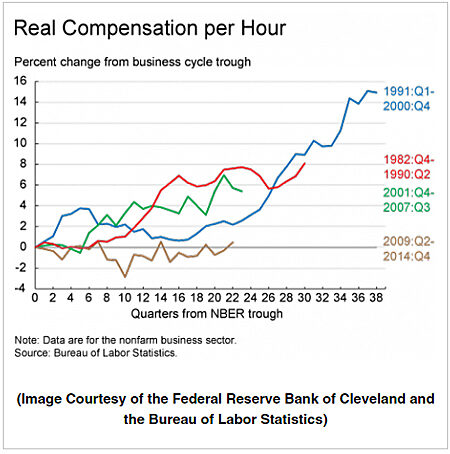 The Cleveland Fed data shows dismal earnings and productivity data for all Americans. And it's important to understand how those numbers are related.

Some folks in Washington think that companies should act like charities and give workers lots of money simply because that's a nice way to behave.

In the real world, though, workers get paid on the basis of how much they produce. So when productivity numbers are weak, as the Cleveland Fed points out, you also get weak data for worker compensation. 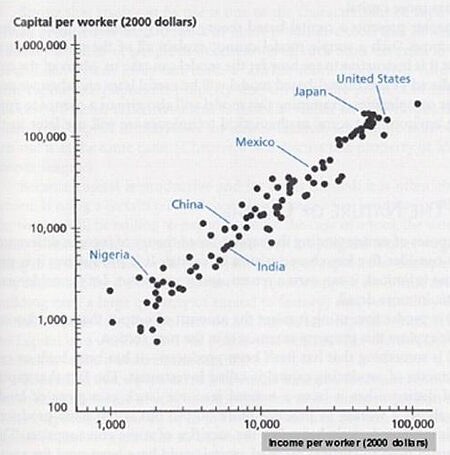 But now let’s dig even deeper and ask what determines productivity numbers. There are many factors, of course, but saving and investment are very important. In other words, capital formation. Simply stated, you need people to set aside some of today’s income to finance tomorrow’s growth.

And growth, as measured by inflation-adjusted changes in output, is entirely a function of population growth and productivity growth.

And this is why Obama’s policies are so poisonous. His tax policy is very anti-saving and anti-investment. And the increases in the regulatory burden also make it less attractive for investors and entrepreneurs to put money at risk.

Obama thinks he’s punishing the “rich,” but the rest of us are paying the price.

Deroy Murdock explains in National Review that they should feel especially angry at the gap between Obama’s rhetoric and performance.

“Republicans should ask black Americans for their votes from now through November 2016. They should do so by challenging blacks to ask themselves an honest question: ‘What, exactly, have you gained by handing Obama 95 percent of your votes in 2008 and 93 percent in 2012?’”

Deroy then lists a bunch of depressing statistics on what’s happened since 2009.

Here are the numbers that I think are most persuasive.

“Obama has betrayed blacks as a community, failed Americans as a people, and enfeebled the United States as a nation.”

To be sure, it’s not as if Obama wanted to hurt blacks. He just doesn’t understand or doesn’t care that statist policies undermine economic performance.

And when you hurt economic growth, the folks at the bottom rungs of the economic ladder generally suffer the most, and that’s why there are so many grim statistics about the economic health of black America.