Skip to main content
Live Now
This article appeared on The Washington Times on August 25, 2014.
TOP

Do you think government has grown or contracted during the past seven years? If you listen to the political class and many of their lackeys in the news media, you would think there have been massive cuts in government spending. The truth is the opposite both in the United States and Europe. As can be seen in the data in the accompanying chart, total government spending in the six years since the beginning of the “Great Recession of 2009” is larger in both real terms and as a percentage of the economy in the United States, Europe, Japan — and even China — than it was before the recession began. The eurozone countries, plus the U.S., Japan and China, account for more than two‐​thirds of world’s gross domestic product. 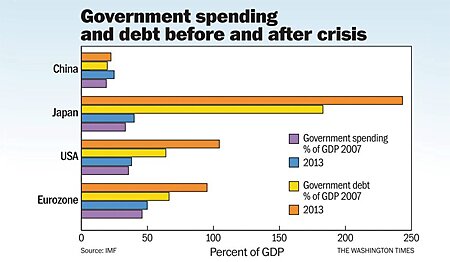 Keynesian and socialist-leaning economists tend to favor bigger government and more government spending, while classical and Austrian school economists tend to favor smaller government. Once again, a global experiment was tried in the early stages of the Great Recession, when massive increases in government spending occurred in the United States and most other major countries. According to Keynesian orthodoxy, this spending binge was supposed to result in a rapid recovery, high growth (the Federal Reserve and the Obama administration had predicted several years of approximately 4 percent growth in the U.S.), and big increases in employment. It didn't happen.

Given the lack of political will to do what is needed, most of the people in the rich countries are going to experience what personal bankruptcy feels like.

The major eurozone countries have stopped growing, including Italy, France and even Germany (which had a better record), and Europe is again teetering on recession. If you listen to the voices of the left in Europe, they claim there was too much austerity (meaning too little government spending). The left wing of the Democratic Party makes similar claims, and one of their gurus, New York Times economist Paul Krugman, blames the poor result on the “stimulus” being too small. One little problem for the Krugman crowd is that they cannot identify any country in the world where government, as a share of GDP, is big enough to produce high growth, high employment and high wages. At times, the socialist and communist economies approached 100 percent government spending, and the only things they produced were shrinking economies and an increase in human misery.

This year, about half of the GDP of the eurozone countries will be accounted for by the government sector. Almost all of many studies of the optimum size of government spending as a percentage of GDP show it is less than 30 percent, and many of these studies, including my own, show it is less than approximately 25 percent. That is, as the size of government increases beyond the optimal level, economic, income and employment growth decline and eventually become negative. This should come as no surprise, given that it is widely recognized that government is most often less efficient and misallocates resources more than the private sector. The increased taxes, regulations and debt necessary to support the bigger government are also disincentives to productive activity.

Many on the American left, including some in the Obama administration, advocate much greater spending, much higher tax rates and more regulation, including labor regulation that mandates more vacations, shorter workweeks and higher minimum wages, like France. The French now have a government that spends about 55 percent of GDP (paradise for the Keynesians), but growth has stopped, real per‐​capita incomes are falling, the debt burden is soaring, and the unemployment rate is 10.2 percent.

The Japanese economy is a growing disaster. The economy dropped almost 7 percent in the past quarter (after a major tax increase — surprise, surprise). Government spending as a percentage of GDP is now more than 25 percent higher than in was just seven years ago, and its government debt is the highest in the world. China is the big bright spot with an economy that is still showing 7.5 percent growth, but government spending is also growing rapidly as a percentage of GDP. If the growth in China’s government spending does not slow, in a few years it, too, will be well above the optimum, which will result in a big slowdown in growth.

The word “austerity” should be dropped from the lips of government policymakers, because they both misdefine it and claim they have cut spending when they haven’t. Those who have looked at the data understand the problems are too much government spending that is both wasted and lavished on the politically well connected, regulations that don’t meet a cost‐​benefit test, and tax levels and rates far above the growth‐ and revenue‐​maximizing rates.

Given the lack of political will to do what is needed, most of the people in the rich countries are going to experience what personal bankruptcy feels like. Assets will be seized or inflated away, and real incomes will fall.