The world has seen North Korea’s Kim Jong Un exactly twice since April 11. His absences have sparked intense global speculation, with highlights including multiple reports of his death or incapacitation. Korea analysts—myself included—have debated endlessly which blood relative might take over. This endless “where is Kim” talk, however, distracts from the far bigger problem at hand: What can be done about a nuclear North Korea? 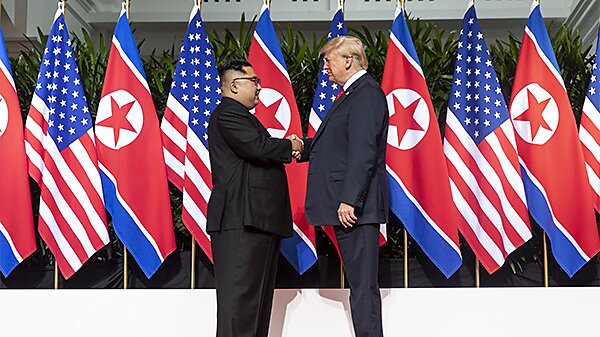 With barely five months to go before the U.S. presidential election, a resumption of nuclear negotiations appears unlikely. The Trump administration appears wedded to its demand that Pyongyang remove all nukes at once. Kim is at the opposite end of the spectrum. It is hard to imagine a scenario in which a serious, practical, and realistic North Korean leader—and Kim appears to be all three, despite the inherent bizarreness of Pyongyang’s system—would give up nuclear weapons. North Korea is a true “shrimp among whales,” as the Korean saying goes, surrounded by colossal and potentially threatening neighbors: China, Japan, Russia, and South Korea. And then there is the aggressive superpower across the Pacific, ever ready to destroy regimes on its naughty list. (Muammar al-Qaddafi’s ugly fate will forever remind dictators of what happens when they trust Washington.)

Emphasizing arms control and seeking to limit North Korea’s nuclear program are far more realistic approaches by the United States. However, any such agreement would take time, with serious negotiations over details necessary before a summit to seal the deal. That isn’t likely to happen before November. And even if an agreement was reached before the election, it could have a short half‐​life if Joe Biden wins the presidency.

Diplomacy is no magic elixir, but talking is most essential between countries at potential military odds.

President Donald Trump should take a different approach and, for the moment, forget denuclearization. Instead, Trump should make a historic overture and create diplomatic ties with North Korea. Clear lines of communication are needed now more than ever; opening them could be a rare, winning foreign‐​policy legacy for the Trump administration.

U.S. hawks have patented several foolish and ineffective policies, such as sanctioning most any country that engages in behavior they find to be offensive. The Trump administration has filled the Treasury Department’s sanctions list. Yet all the president’s so‐​called maximum pressure campaigns have failed; so far not one target, including North Korea, has been forced to change one action. The strategy of treating diplomatic relations with the United States as a reward has also disappointed. Washington considers its refusal to acknowledge another state’s existence a devastating blow that no self‐​respecting government can survive. Except they do, always. And they do so without having any regular and reliable communication channel with the United States.

It took the United States almost a quarter century—from planning to execution—to talk to China and several more years to establish formal diplomatic relations. North Korea, meanwhile, has been around for 72 years without exchanging any diplomats with the world’s primary superpower. Indeed, current administration policy bars Americans from visiting North Korea.

Diplomacy is no magic elixir, but talking is most essential between countries at potential military odds. The United States faced no greater threat than the Soviet Union, a hostile nuclear‐​armed superpower whose armed forces confronted the U.S. military around the world. Imagine the standoff over Berlin, the Soviet invasion of Hungary, the Cuban missile crisis, and other dangerous moments without the ability to communicate. One of the most dramatic moments between the two governments came in 1962, when Attorney General Robert Kennedy, the president’s brother, dropped by the Soviet Embassy for a private conversation with Ambassador Anatoly Dobrynin as their respective nations seemed headed for war. Dobrynin later observed: “I had no doubt that my report of this conversation turned the tide in Moscow.”

U.S. relations with China offer another important example of the importance of diplomatic channels. In September 1950, the allied forces outflanked the North Korean military by landing at Inchon. Soon, Kim Il Sung’s legions were in full retreat, with U.S. units in hot pursuit headed toward the Yalu River border with China. Beijing sought to warn Washington against invading the North but had no reliable means of doing so. Foreign Minister Zhou Enlai passed one message through India’s ambassador, without apparent effect. Diplomatic ties might have allowed consultations that would have reached a satisfactory modus vivendi, weakening the North Korean regime while allaying Chinese security concerns—perhaps halting the allied advance at the peninsula’s narrow neck between Pyongyang and Wonsan. A simple conversation might have ended the war in six months rather than three‐​and‐​a‐​half years.

The Trump administration should announce that it will lift travel restrictions and is prepared to establish diplomatic relations with North Korea. Washington should indicate that once diplomats are talking, they will be expected to discuss all topics, including human rights. Other subjects would include sanctions relief, disarmament steps, recovery of American remains, and cultural and sporting exchanges. While no one should have any illusions about magically solving the nuclear standoff, the two governments could make contact routine. Moreover, North Korean diplomats might be drawn into the larger international community in Washington. While denuclearization would remain as distant as ever, agreement on those less sensitive subjects might move into reach.

Opening channels of communication—without the pressure of grand gestures about nukes—could ease resolution of sticking points such as the detention of a visiting American. Diplomatic relations would offer practical evidence of diminished U.S. hostility to North Korea, which Kim indicated was necessary before making any nuclear deal. A diplomatic presence would offer U.S. policymakers a small window into one of the world’s most closed societies. Formal relations might discourage Pyongyang’s policy of brinkmanship, since the regime could get attention without testing another missile. And an open communication channel would allow informal transmission of ideas on relaxing tensions, addressing conventional arms, and limiting if not eliminating nukes. With full denuclearization a dead end, more traditional arms control, preserving Pyongyang’s deterrent while restricting its size and/​or reach, might have better success. And if not, little would be lost in the attempt.

Trump could also seek to end the Korean cold war. That doesn’t mean the North and South will be lying down together anytime soon. But Washington could normalize relations, encouraging Seoul and Tokyo to follow. Adopting a peace declaration or treaty and targeting sanctions relief to encourage greater inter‐​Korean cooperation also would aid the process. For instance, Kim’s desire for greater economic development might incline him to be more responsive to Japan’s demand for an accounting of Japanese citizens kidnapped by North Korea decades ago.

Of course, maybe nothing would change. Although Kim appears more interested in both economic development and diplomatic engagement than his father and grandfather were, that hardly means he is a closet liberal seeking acceptance by the West. But even so, the United States would have lost nothing. Diplomatic relations recognize reality—another government—and ease communication. In this case, official ties might also nudge serious negotiations forward as well.

What’s up with Kim Jong Un? Who knows? Instead of continuing to guess without having anyone on the ground in Pyongyang, the Trump administration could rely on diplomatic ties. That would be one foreign policy likely to survive even a change in administrations and would be a worthy legacy of an administration otherwise short of foreign‐​policy achievements.