Skip to main content
Live Now
This article appeared on The Washington Times on September 24, 2013.
TOP

This week, the United Nations‘ Intergovernmental Panel on Climate Change is slated to release its fourth report since 1990. Leaked copies indicate an admission that there has been no global warming for the past 16 years, but the report will also increase its probability from 90 percent to 95 percent that global warming — if it does occur — is caused by man. Not one of the major climate models on which the panel bases its predictions forecast the lack of warming over the past 16 years, even though the models do vary widely as to how much warming they predicted.

Not to be outdone, President Obama again is warning us that if the Republicans do not vote for more government spending in the budget battles that are now upon us, we will go back into a recession. You may have not noticed we had left the recession, since employment levels are still below where they were five years ago. The president, of course, does not make such statements off the top of his head, but on the basis of his economic‐​forecast models. You might ask: “How accurate have these models been in forecasting?” Please note the accompanying table for the answer.

There is a long history of mathematical model‐​builders — whether their field is financial models, economic models or climate models — having much more faith in the results than are objectively warranted.

The Obama administration’s Office of Management and Budget makes five-year economic forecasts each year, but to spare it some pain, I took only its two-year forecasts. As you can see, the administration’s average error was well over 100 percent — making its projections almost useless. However, many private-sector economic forecasters managed to get much closer to the mark. The relevant question is this: “Why are both the climate-forecast models and some of the government economic-forecast models prone to not only gross error, but also consistent overestimates?”

Many years ago, when I was chief economist for the U.S. Chamber of Commerce, one of my jobs was to produce a quarterly forecast of the U.S. economy, so I do have some sympathy for those whose job it is to produce forecasts. When constructing a forecast model, it is necessary to identify the key variables that will likely determine the future and then to specify those variables correctly. Good forecasters are constantly modifying their models to correct for past mistakes and take in new data. A consistent overestimate or underestimate often indicates a mistaken specification of some key variable. 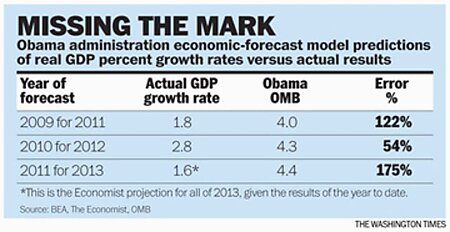 The major long-range climate-change models appear to have over-weighted the effect of increased carbon dioxide, and under-weighted some other key variables, which caused almost all of them to forecast far more warming than actually occurred. It is hard enough to build a reasonably accurate economic-forecast model, let alone a climate-change model, which is far more complex with even less reliable data. Too many climate-change scientists appear have been affected with an unwarranted hubris about what they knew. Many in the political and media classes accepted their doomsday predictions with insufficient skepticism, in part, because it sold newspapers and appeared to justify higher government spending. There is also the inconvenient truth that climate scientists who produce papers and models showing a coming catastrophe are much more likely to receive government grants than those who say there is no big problem.

The Obama administration’s economic forecasts have been consistently wide of the mark in grossly overstating what is likely to occur. Its models use a Keynesian framework, which leads to overstatement of the benefits of government spending and an understatement of the costs of that spending. The models also have consistently underestimated the disincentives of higher taxes on labor and capital and the amount of regulatory-cost drag. If the model-builders corrected these persistent mistakes, they would produce results at odds with the president’s economic ideology — of which they are keenly aware. The president has a political agenda that includes a belief that global warming is a much bigger problem than it is likely to be, and that full employment and more rapid economic growth can only occur with a larger, more activist government.

There is also a long history of mathematical model-builders — whether their field is financial models, economic models or climate models — having much more faith in the results than are objectively warranted. Note the unusual frequency of so-called “Black Swan” events, which keep surprising model-builders with unforeseen events. Defenders of the government-funded models are always quick to point out the potential bias of models funded by private companies with a vested interest, which is fair. However, private-sector forecasters, whether independent or special-interest, compete with each other for accuracy, and those who prove to be the least accurate are quickly disregarded. Both history and an understanding of economic incentives ought to raise many more flags when models funded by taxpayers produce results that are in the perceived self-interest of the political class responsible for their funding. The safe bet is that the Intergovernmental Panel on Climate Change and the Obama administration will continue to produce greatly overstated climate and economic forecasts, and then attack those who voice a healthy skepticism as know-nothings.