Nearly 20 million young people ages 16 to 24 were working before the first increase in the minimum wage went into effect in 2007, but that number fell to 16.9 million shortly after the final increase. The unemployment rate for teens jumped from 15% to 25%. All that might be dismissed as bad luck or bad timing were it not for what happened to the number of people earning less than the minimum wage. 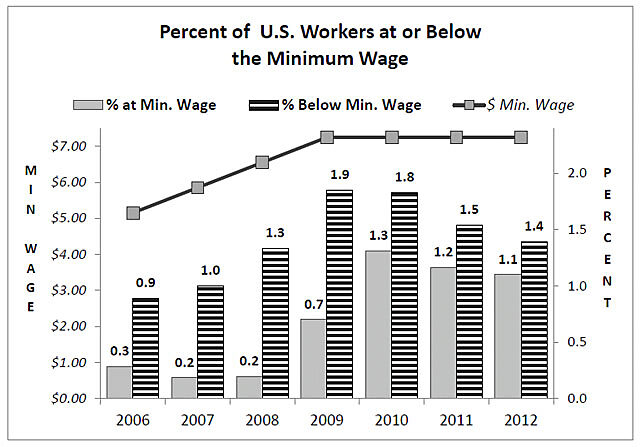 Since those 2 million obviously did not benefit from the last increase in the federal minimum wage, or from even-higher minimum wage rates in 23 states, why would anyone imagine they would now be paid more if the minimum were greatly increased again?

The minimum wage law, under the Fair Labor Standards Act, does not prevent people from working at below $7.25 largely because of legal exemptions. All businesses with less than half a million dollars of annual sales are exempt (unless engaged in interstate commerce), as are seasonal amusement and recreational businesses, fisheries and small newspapers.

Many jobs are also exempt, such as home companions for the elderly, newspaper delivery people, babysitters, disabled workers, fishermen, switchboard operators. Independent contractors and some outside sales jobs are exempt. Tips often count against the minimum wage. And a minimum wage is virtually impossible to enforce for day laborers or housekeepers paid by the job in cash, or those paid on a piecework basis.

The percentage of jobs that paid the minimum wage did finally rise in 2009 and 2010. The numerical increase mainly consisted of people who had previously earned more than the minimum, not less. Also, minimum wage employees were a larger fraction of all workers in 2010 than in 2007 because jobs had fallen by nearly 6.2 million.

This is presumably not the effect salaried folks expect when they tell pollsters that another big increase in the minimum wage sounds like a terrific idea.