Skip to main content
Live Now
This article appeared in The Federalist on June 1, 2015.
TOP

A recent CNN/ORC poll finds 75 percent of Republican partisans prefer that their party nominate a “presidential candidate who can beat the Democratic candidate,” while only 25 percent prefer a nominee who agrees with them on issues that matter most to them. This clashes with partisans’ reported preferred candidates for the Republican nomination. Numerous polls find disproportionate support among partisans for former Florida Gov. Jeb Bush and Wisconsin Gov. Scott Walker; however, U.S. senators Rand Paul and Marco Rubio perform better in general election matchups against likely Democratic candidate Hillary Clinton.

Despite this, 2016 election coverage has tended to pay more attention to Bush and Walker over Rubio and Paul. In fact, a May Fox News poll even excluded Paul from its general-election matchups with Hillary Clinton.

One reason less attention is being paid to these candidates is that only a quarter of Republican voters believe either Rubio or Paul have the “best chance of beating the Democratic nominee in the general election,” according to another recent CNN/ORC poll. But the matchup data say differently.

To be sure, Clinton enjoys a sizable lead against all Republican contenders. That being said, Quinnipiac’s latest poll shows that in a hypothetical general-election matchup, Paul and Rubio come the closest to beating Clinton. Paul would garner 42 percent of the vote to Clinton’s 46 percent and Rubio would capture 41 percent to Clinton’s 45 percent.

This poll is not an anomaly. In fact, an analysis of major polls conducted in 2015 shows that Paul has fared best against Clinton from January-March of this year, with Rubio pulling ahead in April. Quinnipiac found that Paul and Rubio are the only widely known candidates whose favorables are not “under water.” 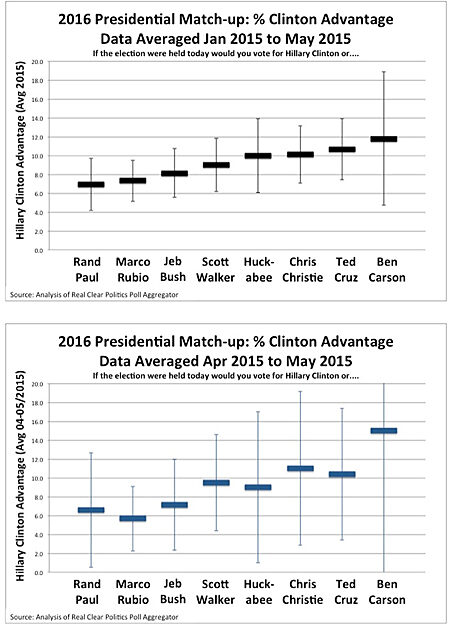 If Republicans care about nominating a candidate who can beat the Democratic nominee in 2016, they might want to pay more attention to Rubio and Paul.

Perception of candidate empathy matters. Readers may recall going into the 2012 presidential election that Mitt Romney and Barack Obama were tied on several candidate qualities, including being honest and trustworthy and being strong leaders. But Obama trounced Romney on “cares about the needs and problems of people like you” 60 to 48 percent. In fact, a slim majority (51 percent) of Americans thought Romney did not care about the needs of people like themselves.

How could anyone honestly expect to win if a majority of the people doesn’t think he or she cares about them? 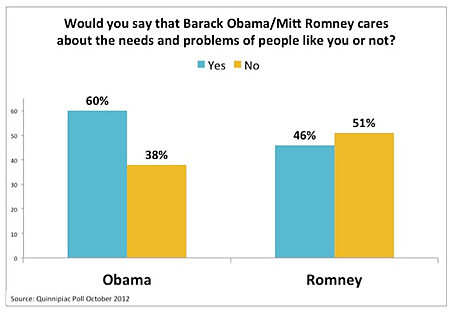 Hillary Clinton is not Barack Obama. The Quinnipiac Poll finds that only 48 percent of Americans think Hillary cares about the needs and problems of people like themselves and 47 percent think she does not care about them.

But Paul and Rubio are the only GOP contenders who Americans are more likely to believe “cares about the needs and problems of people like [them]” than don’t. In this, Paul has a +6 point advantage and Rubio has a +3 point advantage. In fact, Paul and Rubio are the only Republican candidates in the poll who Americans believe care about their needs. For instance, Jeb Bush has a -7 point deficit, Walker has a -5 point deficit, and Donald Trump has a -53 point deficit on empathy.

Why might Americans think Paul and Rubio care about people like them? Perhaps because they have taken stands on issues most Republicans avoid. For instance, Paul has actively sought reform of the criminal-justice system and is an outspoken critic of police misconduct and the justice system's disparate impact on African-American and Hispanic communities. Further, Paul has twice filibustered (or quasi-filibustered) over drone assassinations of citizens in the United States and renewal of the Patriot Act.

Rubio has made legislative efforts to comprehensively liberalize the immigration system and provide a pathway to citizenship for the millions of unauthorized immigrants living in the United States. (Rubio is also known for engaging with pop culture in ways that most Republicans avoid.)

Republicans have lost the popular vote in five of the six presidential elections since 1992. However, candidates like Rubio and Paul who expand their scope of issue ownership beyond conventional Republican issues may be expanding their base of support. It's worth noting that what Rubio and Paul's unique stances share in common is expanding freedom and choice, and this may be attractive to new GOP voters.

Independent voters seem to largely drive these results. Paul (+5) and Rubio (+1) are the only Republicans who lead Clinton among independent voters. Instead, Walker trails Clinton by 2 points, New Jersey Gov. Chris Christie by 3 points, Bush by 5 points, former Arkansas Gov. Mike Huckabee by 7 points, Sen. Ted Cruz by 8 points, and Trump by 15 points. 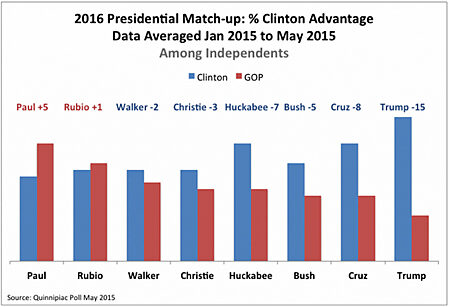 Who are these voters that would not vote for any other Republican candidate besides Paul or Rubio in a matchup with Clinton? Unfortunately, little raw data are publicly available, besides a December 2014 CNN/ORC poll available via the Roper Center that included Paul, but not Rubio. Furthermore, sample sizes are small so data should be interpreted with caution.

However, data from this survey suggest that national-security issues, such as the U.S. government’s use of torture, may attract new voters into the Paul camp. Indeed, civil liberties are precisely the issues on which Paul has distinguished himself from the Republican pack. More publicly available data are needed to investigate Rubio’s voters.

Examining respondents from a Gallup March 2015 survey who are not favorable of Republican presidential candidates besides Paul or Rubio provides further insight into these non-traditionally Republican voters. Paul seems to attract younger, white, male liberals who are non-religious, and Rubio seems to attract middle-age, Hispanic moderates, and particularly women. (Once again, sample sizes are small, so data should be interpreted with caution.)

Some might find it ironic that Rubio and Paul, who were catapulted to high elected office via what many call the “far right-wing” Tea Party movement, are also the very candidates posing the most formidable challenge to the potential Democratic nominee. In fact, Dana Milbank from the Washington Post even argued that Paul had taken a “left turn,” and that his positions would work well if he were challenging Hillary for the Democratic nomination. How can one come from the “far right” and compete for the Democratic nomination at the same time?

While many Republican lawmakers are known by their stances on gay marriage, taxes, and spending, these issues are simply not a high priority for many outside of the GOP base. Instead, many Americans are more worried about being unnecessarily (and unjustly) hassled by the police than by the Internal Revenue Service. Many fear being profiled by law enforcement, worry their grandmother may be deported, and wonder if they will eventually be accepted by their communities.

Americans gravitate to politics of inclusivity, of empathy. This is not the same as handing out “gifts,” as Romney suggested. Americans do not need to be bought—they want to be asked for their vote (well in advance of Election Day).