Why are long‐​term interest rates so low and so similar in so many countries?

Bond yields are not just remarkably similar, but also move up and down together with the synchronization of the Radio City Rockettes.

The graph with this piece shows quarterly yields on 10-year government bonds for five very different countries — each with its own currency. Exchange rates float between these currencies, yet their bonds move as if they were tied together. 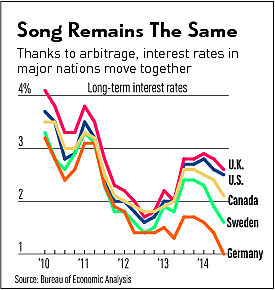 Global synchronization of bond yields encompasses all countries with strong currencies, low inflation and little risk of default. This is mainly due to arbitrage — a fancy word for incentives to buy low and sell high.

The fact that long-term interest rates move up and down together cannot possibly be caused by policies or economic news unique to each country. These coordinated gyrations of global bond yields are unrelated to the U.S. fed funds rate, for example, which has remained unchanged since December 2008.

In the recent past, most U.S. and British economic reporters uncritically attributed low yields to "quantitative easing" (QE) in those countries.

But that story never fit the facts.

For one thing, U.S. and British yields were commonly higher than those of other countries that shunned quantitative easing. And U.S. yields have fallen further than British yields, while the U.S. ended QE and the U.K. did not.

Another problem with attributing global bond yields to national monetary experiments is that the timing is all wrong. In fact, U.S. yields rose whenever QE was expanded and fell when it stopped.

The yield on 10-year Treasuries dropped from 3.85% to 2.54% between April 2010 and October 2010, when the first phase of QE had ended, and then began rising again only after Nov. 3, when the Fed announced a QE program buying $600 billion of Treasuries.

The 10-year yield was 1.6% in the three months before QE began, and then climbed steadily to 2.9% by December 2013 before falling steadily as the QE program was phased out from January to October.

Quantitative easing can't explain why so many global bond yields are so similar and so low, and neither can budget deficits or surpluses. Russia has a sizable budget surplus and a 10.2% bond yield, while Japan routinely combines huge budget deficits (8% of GDP) with the lowest bond yields of all.

Part of the answer is that the weakest economies have the lowest real interest rates: poor investment opportunities mean lower real rates of return. That explains why some of the lowest bond yields are in countries with miserable real GDP growth — ranging from minus 1.1% Japan to plus 0.4% in France.

Yet Hong Kong, Singapore and Taiwan enjoy brisk growth and low bond yields. And countries with depreciating currencies such as Brazil, India, Pakistan, Turkey, Russia and Egypt are experiencing 7% to 11% inflation and therefore bond yields of 8% to 16% despite zero economic growth (stagflation) in the case of Brazil and Russia.

For investors and businessmen, there are at least two practical reasons the globalization of bond yields matters. The first is that politically active economists often peddle their latest magic potion by promising to stimulate "demand" (meaning debt) by lowering interest rates.

The promise in August 1993, for example, was that higher tax rates would guarantee lower bond yields. A couple of months later, the 10-year bond yield began to climb from 5.2% in mid-October to 8% by November of 1994.

Some of the same unrepentant sages who invented the 1993 sales pitch have recently been suggesting the Fed should deliberately aim for higher inflation to reduce real interest rates — as though global bond markets couldn't possibly notice or care.

A second reason that globalization of financial and commodity markets is also important is because it severely limits the scope of mischief for any one central bank. The Federal Reserve affects the global bond market, but does not dominate it.

Suppose the Fed wanted to raise short-term rates, such as what it pays on bank reserves. Since it is unlikely that other central banks would try to raise short-term rates, unilateral Fed tightening would probably raise the dollar's exchange rate. A higher dollar makes oil and other commodities more expensive to other nations, and the resulting drop in world demand puts downward pressure on commodity prices.

That process, in turn, tends to drive inflation lower in the U.S. and higher in countries with falling currencies. While the Fed might try to keep raising short-term interest rates in the face of flat or falling commodity prices, it is unlikely to be able to keep that up for long if global bond yields stay low.

Countries hoping to push inflation higher by depreciating their currencies will simply increase business costs (e.g., for oil and metals priced in dollars) and shrink their consumers' purchasing power. If a nation's businesses are already having trouble selling their wares at lower prices, they surely won't sell more at higher prices.

Global bond yields are low because both global inflation and global real GDP growth are unusually low. This is good news for the U.S. (as recent GDP data attest) because it lowers the cost of energy and industrial materials, lowers the cost of living for consumers and makes it possible to refinance household and business debt at low interest rates.

In other words, a strong dollar is still good for America.