Skip to main content
Live Now
This article appeared on The Washington Times on December 14, 2015.
TOP

The chance of dying in a terrorist attack in any year in the United States is less than one in a million (even including the terrible attack of the approximately 3,000 killed on Sept. 11, 2001). Many in the media over‐​hype the chances of dying in a terrorist attack while at the same time underestimating the number of potential terrorists and terrorist cells among us. At times like these, it is important to be rational about relative risks and prudent in mitigating them. 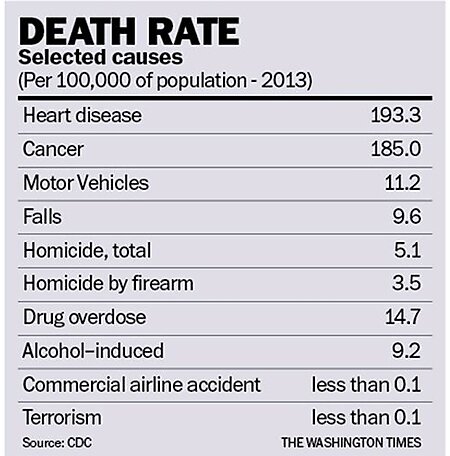 Most people have little understanding of the relative risks of dying when using various forms of transportation. Commercial airlines are by far and away the safest form of transit per passenger mile. In fact, you are about 62 times safer in an airplane than an automobile for a long-distance trip. Airplane crashes obtain a lot of media coverage, in part, because they are so rare, particularly among U.S.-scheduled airlines. The Transportation Security Administration (TSA) airport procedures are so unnecessarily unfriendly and intrusive that they cause many people to drive rather than fly. And yes, the TSA may cause some reduction in the number of deaths caused by terrorists, but it is highly questionable if that number is greater than the number of excessive automobile deaths that are caused by the TSA.

One is about 14 times more likely to die in a bicycle accident and 35 times more likely to die when riding a motorcycle than in an automobile accident, per mile traveled. Even walking is more dangerous than driving — 17 times as dangerous. This is not to say that people should stop cycling or walking — both of which have very good health benefits — but it is important to understand relative risks.

Americans have much more to fear than terrorism.

The risk of being murdered in the United States is also much lower than many think. The nation is about average in the world when it comes to the murder rate, but if you take out Detroit, New Orleans, Baltimore, Philadelphia and Chicago, the United States has one of the lowest murder rates in the world, despite or perhaps because of the high rate of legal gun ownership. Several of the cities with the highest rate of gun violence also have the most restrictive gun laws.

Even though it is very unlikely that one would be killed by a lone wolf or small groups of terrorists, there is good reason to be very concerned about terrorist states. An outlaw state may be able to acquire nuclear weapons (think North Korea) or other weapons of mass destruction and the means to deploy them. Such weapons could kill tens of thousands or perhaps hundreds of thousands of people. Unfortunately, the options are limited when dealing with rogue states — containment (including sanctions), conquering through invasion or decapitating the leadership. Containment can work when the leadership is basically rational and not aggressively expansionary (e.g., the Soviet Union in its latter years). Invasions can work if there is a credible plan for the post‐​conflict period (e.g., Germany and Japan), but can make matters worse without a realistic post‐​invasion plan (e.g., Iraq and Afghanistan). Decapitation means killing the leadership (perhaps repeated times as new dangerous leaders emerge) rather than undertaking a large invasion and occupation — in cases such as the Islamic State, it may be the least bad alternative.

Many more people have been killed by their own governments — well over 100 million in the last century — than terrorists have or are ever likely to kill. Living in a free society, with limited government and the rule of law, is the greatest insurance against a violent end. Thus, it is very disheartening to see a number of the presidential candidates advocating more restrictions on individual freedom and even socialist or police state programs, as if the Constitution and the Bill of Rights are annoyances to be ignored whenever it suits them.

More taxes, more government spending and more regulation — all reduce individual freedom. And when the programs fail to work as promised, the government tends to become more authoritarian in an attempt to achieve the desired outcome, which leads to more government control and abuse of the citizens. Socialism and statism ultimately fail, but often after claiming thousands and, in some cases, millions of lives.

We should fear the indifference of the political class to liberty much more than groups of despicable terrorists. The former we should fight to preserve, the latter we should seek to eliminate.