Skip to main content
Live Now
This article appeared on The Hill (Online) on March 27, 2015.
TOP

Sen. Bernie Sanders (I) of Vermont wants a new “war tax” on the rich to help pay for U.S. overseas military operations.

The idea has a certain perverse appeal to libertarians. We don’t like nation‐​building and we don’t like punitive tax policy, so perhaps mixing them together would encourage Republicans to think twice (or thrice) before trying to remake the world.

But since I’m not a foreign policy expert, let’s focus solely on the fiscal aspects of the senator’s plan.

Although that’s a challenge, since there’s nothing more than a generic press release on Sanders’s website, and it doesn’t specify how the money will be generated. Does the senator want a new top tax rate? Does he want to increase the double taxation of dividends and capital gains? A more onerous death tax? Or is he planning some indirect money grab, such as disallowing certain expenses for those with “excessive” compensation?

It’s not clear what will be accomplished by the senator’s class‐​warfare gambit other than a defeat on the floor.

Regardless, it's not clear what will be accomplished by the senator's class-warfare gambit other than a defeat on the floor, perhaps combined with some low-level embarrassment for the hawkish wing of the GOP.

And even if the world turned upside down and he was able to add another soak-the-rich provision to the tax code, it wouldn't have much effect. Notwithstanding the numbers generated by antiquated revenue-estimating methodology at the Joint Committee on Taxation, it's very likely that the IRS wouldn't collect much additional money. Simply stated, upper-income taxpayers have considerable control over the timing, level and composition of their income, so many of them would adjust their economic choices to avoid the brunt of any new tax.

That's why lawmakers would be well served to instead look on the spending side of the budget. Wouldn't it make more sense to hold taxpayers harmless and ask Washington — if it really wants a war — to finance it with restraint elsewhere in the budget?

This may seem like a foreign concept in today's Washington, but it actually was standard procedure at times in our history.

This chart shows that domestic spending fell sharply as a share of gross domestic product (GDP) during World War II. Much of the change in that ratio was due to rising economic output, of course, but non-defense outlays were subjected to some real fiscal restraint during those years. 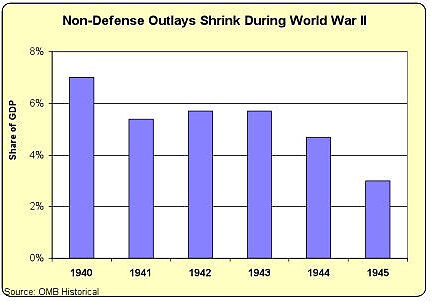 The same thing happened during the Korean War. As defense outlays expanded, lawmakers put non-military spending on a strict diet. As illustrated by the chart, there were substantial savings for taxpayers. 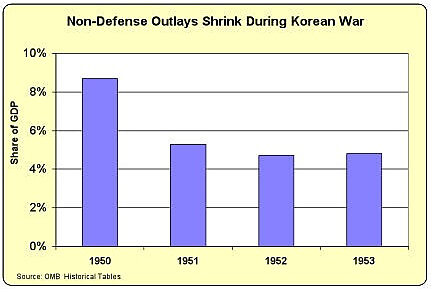 It wasn't until the Vietnam War that this prudent approach was abandoned. President Johnson's guns-and-butter approach meant more spending for all parts of the budget, which explains why LBJ ranks as the biggest spender of all post-World War II presidents.

There wasn't a war during the Reagan years, though it is worth noting that his defense buildup was accompanied by reductions in the overall burden of domestic spending.

The same can't be said of President George W. Bush. He increased military spending after 9-11, but he also presided over LBJ-style expansions in the burden of domestic spending.

Which means we have two odd collections of bedfellows, with Presidents Franklin Roosevelt, Truman and Reagan in one camp vs. LBJ and Bush in the other camp.

Sen. Sanders probably doesn't belong in either camp since he's not a fan of U.S. involvement in Iraq and Afghanistan, but his focus on tax increases rather than spending restraint suggests he's philosophically aligned with Johnson and Bush.

Which is unfortunate, since America's biggest long-run fiscal challenge is a rising burden of government spending. And it goes without saying that politicians who want the make government even bigger presumably won't be part of the solution.