When discussing government involvement in the health sector, I usually focus on the budgetary implications. Which makes sense since I’m a fiscal wonk and programs such as Medicare, Medicaid, and Obamacare are diverting ever‐​larger amounts of money from the economy’s productive sector.

I also look at the tax side of the fiscal equation and complain about how the healthcare exclusion mucks up the tax code.

Though it’s important to understand that government involvement doesn’t just cause fiscal damage. All these programs and policies contribute to the “third-party payer” problem, which exists when people make purchases with other people’s money. 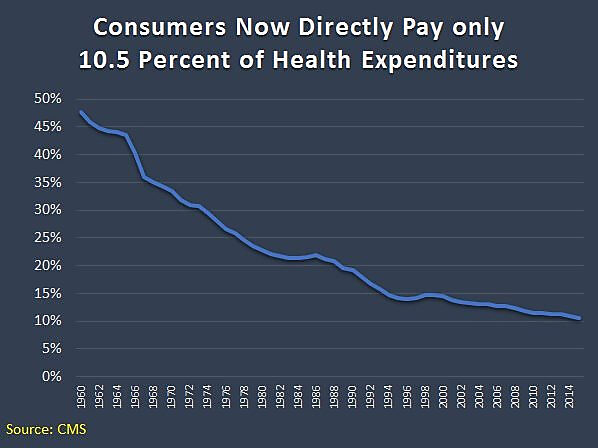 Such a system is a recipe for inefficiency and rising prices since consumers generally don’t care about cost and providers have no incentive to be efficient. And since government figures show that nearly 90 percent of health care expenditures are financed by someone other than the consumer, this is a major problem. One that I’ve written about many, many times.

But there’s another economic problem caused by government — price controls on insurance — that is very important. Indeed, the fights over “community rating” and “pre-existing conditions” are actually fights about whether politicians or competition should determine prices.

Simply stated, politicians want insurance companies to ignore risk when selling insurance. They want artificially low premiums for old people, so they restrict differences in premiums based on age (i.e., a community rating, enforced by a guaranteed‐​issue mandate), even though older people are statistically far more likely to incur health‐​related expenses.

They also want artificially low premiums for sick people, so the crowd in Washington requires that they pay the same or similar premiums as healthy people (i.e., a pre‐​existing conditions mandate), even though they are statistically far more likely to incur health‐​related expenses.

The pro‐​intervention crowd has a supposed solution to this problem. Just impose a mandate that requires the young and healthy people to buy insurance.

Which is part of Obamacare, so there is a method to that bit of madness. But since the penalties are not sufficiently punitive (and also because the government simply isn’t very competent), the system hasn’t worked.

So how do we solve this problem?

Race to the Bottom

One of my colleagues at the Cato Institute, Michael Cannon, is a leading expert on these issues. And he’s also a leading pessimist. Here’s some of what he wrote a week ago as part of a column on the Senate bill to modify Obamacare.

ObamaCare’s “community rating” price controls are causing premiums to rise, coverage to get worse for the sick and insurance markets to collapse across the country. The Senate bill would modify those government price controls somewhat, allowing insurers to charge 64‐​year‐​olds five times what they charge 18‐​year‐​olds (as opposed to three times, under current law). But these price controls would continue to make a mess of markets and cause insurers to flee.

But he wasn’t enamored with the House proposal, either. Here are some excerpts from his analysis earlier this year of that proposal.

The House leadership bill retains the very ObamaCare regulations that are threatening to destroy health insurance markets and leave millions with no coverage at all. ObamaCare’s community‐​rating price controls literally penalize insurers who offer quality coverage to patients with expensive conditions, creating a race to the bottom in insurance quality. Even worse, they have sparked a death spiral that has caused insurers to flee ObamaCare’s Exchanges nationwide…

The leadership bill would modify ObamaCare’s community‐​rating price controls by expanding the age‐​rating bands (from 3:1 to 5:1) and allowing insurers to charge enrollees who wait until they are sick to purchase coverage an extra 30 percent (but only for one year). It is because the House leadership would retain the community‐​rating price controls that they also end up retaining many other features of the law.

Though existing law also is terrible, largely because of Obamacare. Here are passages from Michael’s column in the Hill.

ObamaCare’s core provisions are the “community rating” price controls and other regulations that (supposedly) end discrimination against patients with preexisting conditions. How badly do these government price controls fail at that task? Community rating is the reason former president Bill Clinton called ObamaCare “the craziest thing in the world” where Americans “wind up with their premiums doubled and their coverage cut in half.” Community rating is why women age 55 to 64 have seen the highest premium increases under ObamaCare. It is the principal reason ObamaCare has caused overall premiums to double in just four years.

…Why? Because community rating forces insurance companies to cover the sick below cost, which simply isn’t sustainable. The only solution ObamaCare supporters offer is to keep throwing more money at the problem — which also isn’t sustainable.

Anyone who wants to really understand this issue should read all of Michael’s work on health care issues.

But if you don’t have the time or energy for that, here’s an image that I found on Reddit‘s libertarian page. Using not‐​so‐​subtle sarcasm, it tells you everything you need to know about why price controls ultimately will kill health insurance.

P.S. None of this suggests we should feel sorry for health insurance companies. They got in bed with the previous administration and endorsed Obamacare, presumably because they figured a mandate (especially with all the subsidies) would create captive customers.

Now that it’s clear that the mandate isn’t working very well and that increased Medicaid dependency accounts for almost all of the additional “insurance coverage,” they’re left with an increasingly dysfunctional system. As far as I’m concerned, they deserve to lose money. And I definitely don’t want them to get bailout money.

P.P.S. Republicans aren’t doing a very good job of unwinding the Obamacare price controls, but they deserve a bit of credit for being bolder about trying to undo the fiscal damage.

Addendum: A comment from Seb reminds me that I was so fixated on criticizing price controls that I never bothered to explain how to deal with people who have pre‐​existing conditions and therefore cannot get health insurance.

I’m guessing the answer is “high‐​risk pools” where the focus of policy is directly subsidizing the relatively small slice of the population that has a problem (as opposed to price controls and other interventions that distort the market for everyone). But the main goal, from my perspective, is to have states handle the issue rather than Washington.

A federalist approach, after all, is more likely to give us the innovation, diversity, and competition that produces the best approaches. States may discover, after all, that insurance doesn’t make sense and choose to directly subsidize the provision of health care for affected people.

In the long run, part of the solution is to get rid of the health care exclusion in the internal revenue code as part of fundamental tax reform. If that happened, it’s less likely that health insurance would be tied to employment (and losing a job is one of the main ways people wind up without insurance).