Gary Johnson’s campaign for President has lately had a mix of bad and good news in the polls — more on that in a moment — but the poll on the front page of yesterday’s Washington Post definitely is one he will be talking about. Using SurveyMonkey online methodology, the survey measured voter opinion in each of the 50 states over the past month. And it finds the Libertarian candidate to be a serious factor in the race. 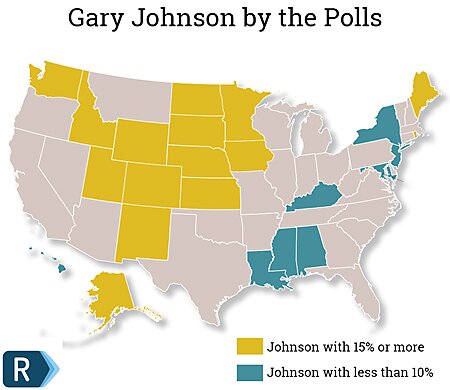 The headline finding for Johnson is that he reaches 15 percent of the vote or better in 15 states, and 10 percent or better in 42 states, that is, all but eight. The states where he makes the strongest showing are his own New Mexico (25 percent); Utah (23 percent); Alaska, Idaho, and South Dakota (19 percent); Kansas (17 percent); Colorado, Iowa, North Dakota, and Washington (16 percent); and Maine, Minnesota, Nebraska, Rhode Island, and Wyoming (15 percent).

At the other end, the eight states that lag most in enthusiasm for the mountain-climbing two-term governor are Louisiana and Maryland at 9 percent; Alabama, New Jersey, and New York at 8 percent; Hawaii and Kentucky at 7 percent; and Mississippi at a mere 4 percent.

It’s hard to dismiss this as statistical noise associated with the imperfections of measuring opinions in small states (where Johnson tends to do best) because both his stronger states and weaker states form coherent geographical clusters. If you were playing Game of the States, you could hop a continuous path on the map through all but two of his best states: Alaska, Idaho, Utah, New Mexico (a corner crossing, but the Milton Bradley rules say that’s okay), then up to Iowa and around Minnesota and the Dakotas to Wyoming. You’d still need to make it over to Maine and Rhode Island, two New England states known for their love of quirkiness, to finish collecting your biggest Johnson fans. The areas of the country not yet enthusiastic about Gary likewise form recognizable clusters: one in Louisiana-Mississippi-Alabama, the other New York-New Jersey-Maryland, plus Kentucky.

In this fluid and surprising election year, with new revelations coming daily and unexpected endorsements likely, anything could happen.

According to the new poll, Gary Johnson is not far from overtaking Donald Trump for second place in his home state of New Mexico, while in at least five states he’s within 10 points of pushing Hillary Clinton into third place: Utah (where he trails her by only 4 percent); Idaho and Wyoming (6 percent); and North and South Dakota (10 percent).

In this fluid and surprising election year, with new revelations coming daily and unexpected endorsements likely, anything could happen — including a Johnson move into first place in states like Utah and New Mexico. Yet the Commission on Presidential Debates — its rules and behavior shaped over the years by loyalists of the two major parties — could exclude him based on its calculation of whether he has reached an average of 15 percent before each debate in five CPD‐​designated major polls.

For better or worse, Johnson’s performance in national polls keeps scattering widely — in six national polls to come out within the past few days he’s scored 12 percent in NBC/SM and IBD, 11 percent in GWU, 9 percent in Fox, and only 7 percent in CNN and Rasmussen. While the new WaPo/​SM is consistent with the higher end of that range, the polls preferred by the debate commission — unfortunately for Johnson — tend to be the ones where he underperforms.

There is, of course, no single best way to design and weight a poll. Outcomes for Johnson may vary greatly depending on the sampling of independent voters (who contribute much of his strength) and technology used (Johnson’s support skews dramatically young, which means his supporters are more likely to lack landlines and engage online).

Like it or not, the debate commission’s methods are going to be coming under intense scrutiny. Former Massachusetts governor Bill Weld, Johnson’s running mate, makes a good point here: “They [the debate commission] have a duty to be non‐​partisan rather than bipartisan.” That same distinction comes up in legislative redistricting, where bipartisan line drawing can sometimes reach a very different result (“You can protect your guys if we can protect ours”) than a nonpartisan process would have done.

A truly nonpartisan commission would need to set some thresholds and standards for debate admission: you don’t need to be a Republican or Democratic partisan to see the problem with letting 12 small‐​party candidates jostle with Clinton and Trump for camera time. But is there much doubt that if the debate commission truly followed a non‐​partisan rather than bipartisan course, Johnson (and perhaps also Green Party nominee Jill Stein) would right now be in a position to practice their zingers for the debate stage?