Skip to main content
Live Now
This article appeared on Education Next on January 5, 2016.
TOP

Despite a few setbacks, 2015 was a great year for educational choice. By the time the ball dropped in Times Square, 15 states had adopted 21 new or expanded educational choice policies, and courts rejected challenges to choice laws in Alabama, Florida, Louisiana, and North Carolina.

However, the new year brought sobering news for choice supporters. For the first time ever, a random‐​assignment study found a negative result from a school voucher program.

In a study published by the National Bureau of Economic Research, researchers Atila Abdulkadiroglu of Duke University, Parag Pathak of MIT, and Christopher Walters of the University of California at Berkeley found that students who received a voucher through the Louisiana Scholarship Program (LSP) during the 2012–13 school year were 50 percent more likely to receive a failing score on the state math test than students who applied for but did not receive a voucher. Outcomes for voucher students in reading, science, and social studies were also negative. The researchers report that the “negative impacts of vouchers are consistent across income groups, geographic areas, and private school characteristics, and are larger for younger children.”

For the first time ever, a random‐​assignment study found a negative result from a school voucher program.

Until now, random-assignment studies have almost unanimously found positive impacts for voucher recipients generally or particular subgroups, especially those that had been the most choice deprived (e.g., low-income minorities). Out of a dozen random-assignment studies, 11 found positive impacts from vouchers and just one failed to find any statistically significant impact. Many of the positive effect sizes were modest, but some were considerable and, until now, none had found any harm.

So why were the results from Louisiana’s voucher program so different? Although not conclusive, there is considerable evidence that the problem stemmed from poor program design. Regulations intended to guarantee quality might well have had the opposite effect. The LSP’s high level of private-school regulation appears to have driven away better schools while attracting primarily lower-performing schools with declining enrollments that were desperate for more funding. 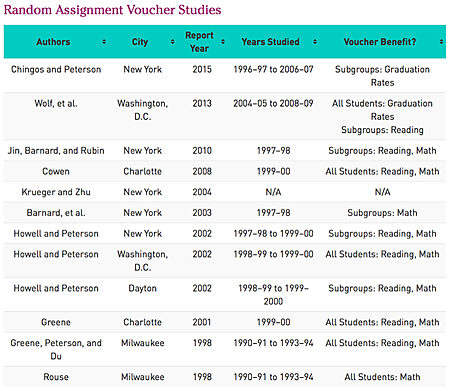 Enacted in 2008 and expanded in 2012, the LSP provides vouchers to low-income students assigned to district schools that have received a “C” or below on the state’s school rating system. At the time of the NBER study (2012-13), more than eight in ten of the more than 6,000 voucher recipients were African-American and the average annual family income of LSP participants was less than $18,000, considerably below the income eligibility cap of 250 percent of the federal poverty line ($57,625 for a family of four in 2012). The average value of a voucher that year was $5,311. As of the 2015-16 school year, 7,110 students received vouchers worth $5,856 on average.

The LSP is one of the most heavily regulated school choice programs in the nation. Schools that wish to accept voucher students may not set admissions criteria for voucher applicants. Schools may only give preference to siblings of current students or students enrolled in nearby district schools that have received a “D” or “F” grade. If there are more applicants than available voucher seats, the school must hold a lottery for equal priority students. Schools are forbidden to charge families any tuition beyond the value of the voucher, and they must administer the state test to voucher students.

Each of these regulations stem from perfectly reasonable and even admirable desires to give priority to the students who are most in need and to ensure that those students have access to quality schools. Restrictions of admissions criteria are intended to prevent “creaming” the best students. The prohibition against charging tuition beyond the voucher amount is intended to prevent schools from pricing out the neediest families. The state test mandate is intended to weed out low-performing schools.

Unfortunately, the effects of regulations sometimes depart considerably from their designers’ intentions.

Due to the LSP’s high regulatory burden, two-thirds of Louisiana private schools do not accept voucher students. In an American Enterprise Institute survey of private schools, 79 percent of Louisiana school leaders reported that concerns about program regulations played a deciding factor in their decision not to accept LSP students, including 64 percent who listed this as a major factor. In particular, 71 percent worried about the effect on their school’s admissions policies, including 45 percent who stated that this played a major role in their decision. In addition, 54 percent expressed concerns about administering the state test, including 34 percent who said it played a major role in their decision. Other areas of great concern included paperwork and the effect on the schools’ character or identity.

By contrast, the same survey found substantially lower levels of concerns about school choice regulations among school leaders in Indiana and Florida, where the regulatory burdens are considerably lower. While both states limit their vouchers and tax-credit scholarships to low-income students, they do not otherwise restrict admissions criteria, nor do they prevent schools from charging full tuition. Like Louisiana, Indiana requires schools to administer the state test to voucher students, whereas Florida allows schools to choose among many nationally norm-referenced tests.

Unsurprisingly, Florida has the highest level of private school participation among the three states (about two-thirds), followed by Indiana (about half), and Louisiana (one-third). Moreover, Florida schools are the most likely to plan to increase the number of choice students they enroll, while Louisiana schools are the most likely to decrease that number. 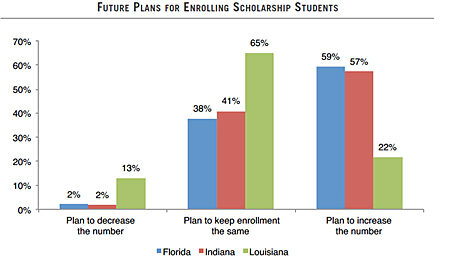 The Unintended Consequences of Overregulation

Indeed, Greene’s concern is borne out by the data. According to the NBER study, “LSP schools open in both 2000 and 2012 experienced an average enrollment loss of 13 percent over this time period, while other private schools grew 3 percent on average.” The authors note that this “indicat[es] that the LSP may attract private schools struggling to maintain enrollment,” and they conclude that these results “suggest caution in the design of voucher systems aimed at expanding school choice for disadvantaged students.”

In The Fatal Conceit, F.A. Hayek observed, “The curious task of economics is to demonstrate to men how little they really know about what they imagine they can design.” Whereas school choice programs with a lighter regulatory burden yielded positive results, the technocratic attempt to ensure quality through regulation yielded the first negative results of any school choice program ever studied. The large body of positive findings should continue to give us confidence in the market approach to education reform, but the latest NBER study should serve as a sobering reminder of the limits of our ability to engineer outcomes from above.