The European Central Bank has ballooned its “quantitative easing” bond‐​buying spree to about 60 billion euros a month, as announced in late January. Judged by a key rationale for QE — namely, to raise inflation to 2% — world markets have already given the plan a resounding vote of “no confidence.”

On the first day of QE, 10-year debt was about 0.33% in Germany and below 1.3% even on dodgy Italian and Spanish bonds. The 5-year German yield was below zero. Global investors would surely not settle for such meager yields if they expected 2% inflation.

It is true that eurobonds offered the prospect of capital gains while yields fell (aside from foreign exchange losses for American investors). With the least risky euro yields approaching zero, however, the ECB is risking big capital losses if it ever succeeded in raising inflation, real growth or both. In that sense, the ECB is betting heavily on its own failure. 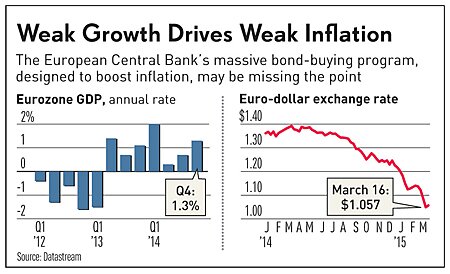 With long-term rates so low, the euro yield curve has also become dangerously flat. Banks make money by borrowing short and lending long, so the flattened yield curve discourages lending and thus threatens small companies that depend on bank loans.

Many point to the falling euro as proof that the ECB policies are a "stimulus." Since last May, the euro has fallen by nearly one-fourth against the dollar — to a 12-year low. But that has had unintended consequences.

In fact, the one unmistakable impact of the lower euro has been to raise the cost of production for European industry and the cost of living for European consumers — largely because key commodities are priced in dollars.

By March, the Economist index of commodity prices was down 18.4% in dollars but up 5.7% in euros. Europeans have seen only a fraction of the benefit of falling oil prices, because oil is priced in dollars but paid for with shrinking euros. Costs of raw materials have gone up for European manufacturers and consumers, but down for their U.S. counterparts.

What Europe desperately needs is to slash the marginal cost of government.

Proponents of a weaker euro tell us a lower exchange rate will (1) raise inflation, yet (2) make exports cheaper to those paying in dollars. The goal is somehow to raise prices at home while lowering them abroad.

The assumption that a lower euro will make exports cheaper assumes prices of finished goods remain the same in euros. Since the explicit intent of ECB policies is to raise inflation in general, why would that not also raise prices in export industries? And even if euro depreciation could force European exporters to receive fewer dollars for their goods, that describes a worsening of the terms of trade — giving up more in exchange for less.

If these higher commodity costs could simply be passed on to consumers at home and abroad, then consumer price inflation might speed up as intended. But if businesses in Europe have been having trouble selling their goods and services to domestic consumers at current prices, why should they expect to sell more at higher prices?

So, who has been winning the recent currency wars? If the weakest currencies were the winners, then Venezuela, Argentina, Brazil and Russia would have to be declared the victors. If that makes no sense, then why assume smaller doses of the same poison will be a tonic for Japan or Europe?

Meanwhile, the strong dollar has contributed to falling inflation in the U.S., which Americans welcome yet European pundits fear. Thanks to lower inflation, average real wages in the U.S. rose 0.7% in 2013 and 0.8% in 2014. Together with a U.S. unemployment rate half the 11.2% European average, rising real wages are contributing to rising consumer spending, including spending on imports.

Some American analysts fear a weaker euro must shrink the dollar value of profits earned by U.S. subsidiaries in Europe (Apple (NASDAQ:AAPL) must not have gotten the memo). Yet a weaker euro has precisely that same effect on the dollar value of profits earned by European companies — which need more dollars to purchase commodities and U.S. technology, and to service debts denominated in dollars.

Over the past year, as eurozone core inflation dipped from 0.7% to 0.6%, we have been repeatedly barraged with news headlines saying Europe is on the verge of slipping into some downward spiral of deflation. But are low prices really the cause of economic stagnation or merely a consequence?

When any country’s merchants and manufacturers have trouble selling their wares they naturally turn to discounting prices, often with sales and rebates, to improve their sales. But it doesn’t follow that sales would improve if only their prices could somehow be pushed higher.

The weakest economies of Europe are not stagnant or declining because of low inflation. Businesses in such weak economies can’t raise prices because the economies are weak, not the other way around. There is too little incentive to work and invest to expand production. And without more output there is no more income.

It has been commonplace to argue that Europe needs “structural” reform, but that is far too fuzzy to be helpful. Europe is taxed to death, suffocating from hyper‐​taxation. The marginal tax wedge between what employers pay for labor and what low‐​wage employees receive is 48%-68% in Europe, according to the OECD.

What Europe desperately needs is to slash the marginal cost of government. That means (1) cutting spending on consumption and transfers, and (2) cutting payroll, income and consumption tax rates. The ECB’s risky experiment with monetizing gobs of government debt at near‐​zero interest rates is likely to delight governments, but it does nothing for the overtaxed, overregulated European private sector.