Skip to main content
Live Now
This article appeared in The Federalist on February 3, 2016.
TOP

What is going on in the Republican primary? While the RealClearPolitics polling average in Iowa had Donald Trump leading Ted Cruz (28.65 percent to 23.9 percent), Cruz ultimately pulled ahead to win the Iowa caucuses Monday with 27.7 percent to Trump’s 24.3. Marco Rubio also surprised pundits with a last‐​minute surge exceeding his RCP polling average by 6 points (23.1 percent actual versus 16.9 percent).

The 2016 GOP primary has had the highest number of presidential candidates running for one party’s nomination at one time. It has showcased what pundits have described as a GOP civil war between “establishment” and anti-establishment or populist wings of the party. Interestingly, the high number of candidates in the race gives us a measurement tool to better understand the underlying structure of the race and the intra-party civil war.

Put This Theory to the Test

To identify clusters of presidential candidates who have attracted similar types of voters, I analyzed data collected in a November 2015 Cato/YouGov survey on criminal justice reform and policing that included questions on the election. Although this data doesn't have the latest horserace numbers, it can still tell us about the race's underlying dynamics.

The survey asked all respondents—Democrat and Republican—if they would or would not consider voting for each of the Democratic and Republican presidential candidates. Using a variety of statistical tools, I found GOP candidates are likely competing alongtwo main dimensions in the primary: a populist/establishment dimension, and an ideological dimension. Rand Paul comes close to defining a third dimension, and stands apart from the other GOP candidates. I'll explain. 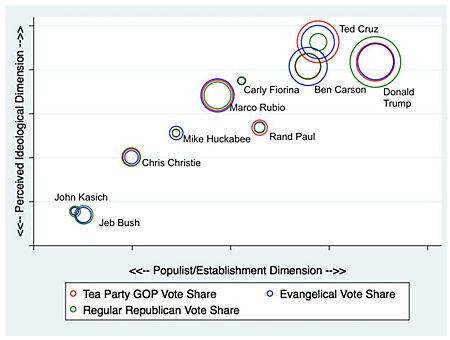 Factor analysis conducted with principal component factor extraction with oblique rotation revealed two factors with eigenvalues greater than 1. The survey included a battery of questions asking respondents if they would or would not consider voting for each of the candidates. These variables, coded as 0/1, were included in the factor analysis.

I used a statistical test [1] (factor analysis) of all the GOP candidate variables to examine which candidates tend to attract similar types of GOP voters. The test can also indicate if candidates are competing along one dimension (like establishment versus antiestablishment) or perhaps more. To be sure, this analysis is both an art and a science, and some subjective interpretation is necessary. The results indicate there are two statistically meaningful dimensions along which candidates are competing, but it can't identify what they are—that's up for interpretation.

Do You Value Ideology or Populism More?

As you can see in the chart, Donald Trump heads up one dimension (horizontal axis) and Ted Cruz leads the other dimension (vertical axis), while Jeb Bush and John Kasich are at the opposite end of the spectrums. These data seem to suggest that voters view Trump as the most anti-establishment/populist candidate and Cruz as the most conservative candidate.

In contrast, voters seem to view Bush and Kasich as more moderate candidates closer to the so-called GOP establishment. Paul stands out, probably because he is viewed as outside the Washington establishment but his libertarian streak makes him appear more moderate than Cruz. Notably, Rubio straddles both the anti-establishment and establishment wings.

The high number of candidates in the Republican primary helps us measure the underlying structure of the race and the intra‐​party civil war.

These data provide some indication that if GOP voters ultimately value an outsider populist over the establishment and don’t care as much about ideology they go for Trump. But if at the end of the day they want an anti‐​establishment candidate who they view as also very conservative, perhaps they go for Cruz.

Again, even though these aren’t the latest numbers, recent polls continue to show Cruz getting disproportionate support from Tea Party supporters (and Tea Party Patriots Citizens Fund threw its support to Cruz hours before the Iowa caucus) and Trump doing best amongnon-evangelical, non-Tea Party working‐​class Republicans who are not that economically conservative.

The main difference since this survey was conducted is Carson’s decline. At least in Iowa, it appears Cruz benefited from Carson’s decline in the polls by disproportionately picking up his evangelical supporters (also see here).

Notably, Rubio appears to be the consensus candidate by appealing across the Tea Party, evangelical, and regular Republican groups and straddling the establishment and anti‐​establishment groups. This may help explain why he was capable of a last‐​minute six‐​point surge in Iowa (and a surge in online prediction markets).

Despite Rubio riding the 2010 Tea Party wave into the Senate, he has also attracted more moderate GOP voters. Perhaps then it is less surprising that he is the only GOP candidate out‐​polling both Hillary Clinton and Bernie Sanders in one‐​on‐​one match‐​ups.

Paul sticks out as a candidate farther from the establishment but viewed as less conservative than Cruz, Rubio, Trump, and Carson. Statistical tests indicated Paul doesn’t fit well with the other Republicans, but instead he and Sanders could perhaps structure another dimension.

This may not be a statistical anomaly. The survey asked several questions measuring a person’s preference for individual autonomy, for instance if respondents agreed or disagreed that “a person should be allowed to do dangerous and self‐​destructive things, as long as they don’t put others at risk.” Only Sanders and Paul supporters were significantly above average in answering these questions. These two candidates, who draw disproportionately from younger voters, seem to represent the millennial generation’s libertarian penchant for individual autonomy.

Without more Democratic candidates competing for the nomination, it was not possible to conduct an analogous analysis among them. That being said, if more candidates were running it’s very likely we’d find similar divisions among Democrats, with Sanders leading the political outsider wing and Clinton leading the insider.

In sum, GOP voters seem to view their presidential candidates almost in rank order from those most aligned to least aligned with the Washington establishment. However, voters do not seem to think that more anti‐​establishment candidates are necessarily more conservative. Ideology and anger seem to be competing considerations for GOP voters in this primary cycle.

It remains to be seen whether a candidate primarily representing ideology, anger, or compromise will ultimately prevail.

To read more about the survey see here.