MILAN — The chaos in Italy has really only just begun.

The collapse of the government earlier this summer and the byzantine posturing and horse‐​trading as the country’s major parties struggle to form a new one isn’t just the result of the ambition and fecklessness of individual politicians.

It’s what you get in Italy when you elect a parliament with a proportional system.

Forget policies. What’s at stake is who gets what job.

The two parties in the ongoing coalition talks have spent much of the last decade tearing each other down. For the anti-establishment 5Star Movement, the Democratic Party epitomized the ancien régime, synonymous for its voters with corruption and nepotism. For the Democrats, the 5Stars, with their calls for direct democracy and cyber populism, represented a vulgar challenge to representative democracy.

Today, the two parties are debating over which is best suited to provide the new defense minister — the 5Stars announced Tuesday that it had secured members' approval for a new coalition.

Unlikely bedfellows divvying up the plum jobs is hardly a new phenomenon in Italy, the birthplace of political realism, from Machiavelli onward. Italians know that politics is, at all levels, a distributive activity.

You keep people loyal by throwing them buns. The logic of political appointments is key to keep the machine of consensus well-oiled in a complex society.

The new Italian executive being formed under the renewed leadership of Prime Minister Giuseppe Conte is expected to appoint some 400 people to board positions in different bodies, ranging from independent authorities to state-controlled businesses. Political parties and related interest groups are naturally hungry to grab as many of these as possible for themselves.

But if politics in Italy seems particularly messy this time around it's because of a recent change in the electoral law — one that restored elements of the nearly pure proportional system that was in place from the end of World War II until 1992.

It's a system that worked arguably well until the early 1960s, as Italy moved from a backward, agricultural country to an industrial powerhouse. But after an initial grace period, its dominant characteristic was an extreme form of political bargaining.

Why did governments change so quickly? Not because of great ideological disputes or passionate debates over public policies. They fell because they relied on the support of complex mosaics of political parties and relevant supporting interests, all of which had to be rewarded to remain part of the coalition.

In Italy, governments are chosen by the parliament, not directly elected by voters. That allows the various political forces in the two chambers to swap out the executive — and redistribute the goodies — without giving up their own jobs. And indeed, while the lifespan of governments was short, parliaments often survived for close to their full terms.

Things changed in 1992, when Italy moved to a new way of electing parliaments, with some elements resembling the British first-past-the-post system. This allowed a flamboyant politician like Silvio Berlusconi to move the country closer to a majoritarian system, in which Italians felt they were voting for a government leader of their choosing. Italian politics remained exciting. But the system was arguably more stable, with Berlusconi in particular dominating the political stage.

The present parliament is the product of yet another electoral system. The 2018 vote took place under mixed system, in which 37 percent of seats were allocated using a first-past-the-post electoral system and most of the rest using a proportional method.

The result is the instability we see today. A proportional system, today's political upheaval reminds us, gives less power to voters and more to party leaders and allows parliamentary tacticians to trump over electoral stars.

It's a lesson Matteo Salvini, the leader of the far-right League party who sparked the crisis, is learning to his detriment.

After ruling for a little more than a year in an uncomfortable coalition with the 5Stars, Salvini pulled the plug on the government in early August.

It's likely he thought he was being a smart political strategist. Support for the League has soared during Salvini's time in government, and polls suggested he would likely be able to rule alone, or with the support of the even-further-right Brothers of Italy party.

A polarizing figure of the type that could do well in a majoritarian system, Salvini was aiming for an electoral campaign in which he — like Berlusconi before him — would be both a contender and the main topic of debate.

He didn't count on the the 5Stars turning instead to their erstwhile arch-foe, the Democratic Party, as a way to preserve their jobs and divvy up the spoils. 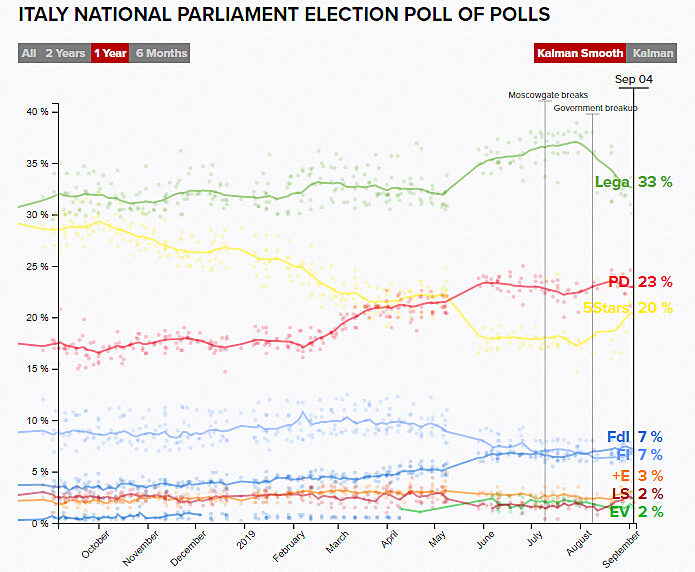 For more polling data from across Europe visit POLITICO Poll of Polls.

From the point of view of public finances and foreign policy, Conte's new government may be a lesser evil than one led by a Salvini strengthened by an electoral triumph. Indeed, European Commission President Jean-Claude Juncker has compared Conte with Greek former Prime Minister Alexis Tsipras, who campaigned as a radical but governed as a moderate.

But the reemergence of political bargaining as the chief driver of Italian politics is not without serious costs.

The extreme political bargaining Italy saw in the 1970s and 1980s was good at keeping political parties happy, but it almost invariably meant increasing spending.

Decisive reforms were usually postponed, as they did not immediately translate into benefits for the members of the ruling coalition. Short-lived governments had an even tighter time horizon than politicians typically have.

That worked okay at a time when nobody much cared about growing of public debt, when Italy was free to devalue its currency to remain competitive, and before globalization compounded the costs of dysfunctional institutions.

But can it work at all in our time?