Skip to main content
Live Now
This article appeared in Investor’s Business Daily on May 5, 2015
TOP

My colleague Dan Mitchell and I have long been baffled by the Quixotic efforts of such prominent economists Paul Krugman and Joe Stiglitz to blame economic stagnation in the eurozone on insufficient government spending.

Government spending in the euro countries rose from 45.3% of GDP in 2007 to 49.5% in 2013, according to Eurostat, with particularly huge increases in Greece, France, Italy and Portugal. The table below shows how little austerity there has been in euro public sectors. 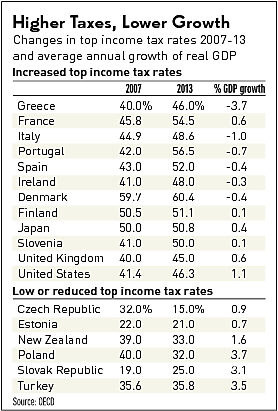 Stiglitz writes: "Austerity had failed repeatedly, from its early use under U.S. President Herbert Hoover, which turned the stock-market crash into the Great Depression, to the IMF 'programs' imposed on East Asia and Latin America in recent decades. And yet when Greece got into trouble, it was tried again."

In reality, those are all examples of the failure of higher tax rates, not government spending restraint.

Why have mainstream Keynesian economists been so strangely silent about the infliction of punitive tax rates on depressed European economies? What accounts for this blind spot?

High marginal tax rates rarely raise more revenue, which means they don't matter in this view because only smaller deficits are defined as austerity. If judged by revenue effects, higher tax rates in 1932 and 1991 look like big tax cuts. 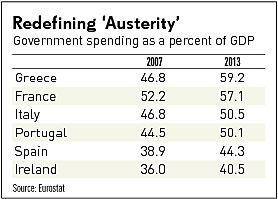 Another explanation for mainstream silence about huge increases in top tax rates among collapsing European economies is the trendy fetish about the "top 1%" income share. "Toppling the top 1%," as Hillary Clinton put it, supposedly justifies punitive tax rates regardless of any adverse behavioral impact on work effort, investment, entrepreneurship or migration to low-tax countries.

Higher marginal tax rates had the additional bad effect of depressing supply: They undermine incentives to make the extra effort and investment needed to raise personal income and therefore national income. The highest marginal tax rates cause the most crippling distortions and disincentives — fostering brain drain and capital flight while driving much of the remaining economy underground.

Since 2007, the austerity imposed on the weakest economies of Europe was not from spending cuts, but from higher tax rates.

If Keynesian critics of European austerity would shift focus away from invisible spending cuts to highly visible tax increases, then we could all join forces to support less destructive tax policies at home and abroad.