Skip to main content
Live Now
This article appeared on The Federalist on April 29, 2016.
TOP

Next week’s Indiana primary looms large as one of the two remaining contests that will decide whether Donald “Presumptive” Trump really will be the GOP nominee for president in 2016. Given the state’s importance, Trump will spend the next several days cruising around the Hoosier State reciting his usual stump speech about the devastating effects of free trade on the state’s manufacturing sector and economy more broadly—a problem Trump alone (of course) can fix through tariffs and “better trade deals.”

Proof of this devastation once again comes from Trump’s angry references to the now-infamous video showing Carrier management informing some Indiana employees they were moving some production, and production jobs, to Mexico. A simple glance at the facts, however, reveals the Carrier anecdote to utterly unrepresentative of the economic situation in Indiana. Indeed, there may be no state in the country that, at least on paper, should be less amenable to Trump’s doomsday message about trade and American manufacturing.

Perhaps the most important fact about Indiana's economy—and one you won't be hearing from Trump or his media buddies—is that the state's manufacturing sector is thriving. According to government data compiled by the National Association of Manufacturers (NAM), Indiana leads the nation in manufacturing's share of state gross domestic product (a whopping 29.45 percent, while most states are in the low teens) and jobs (17.06 percent).

Meanwhile, Indiana's annual manufacturing output has soared since 2000 (coincidentally when everyone's favorite trade punching bag China joined the World Trade Organization, or WTO) from a little more than $60 billion in 2000 to well more than $93 billion in 2014 (the last year of data available).

Unlike many other states, Indiana also has experienced significant gains in manufacturing employment since the end of the Great Recession, adding more than 90,000 manufacturing jobs between late 2009 and early 2016: 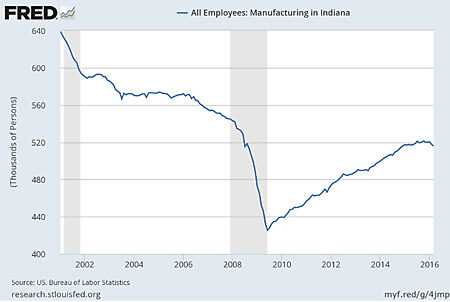 The long-term trend for Indiana manufacturing jobs is, as with the rest of the United States and the world, downward, but—as the aforementioned output stats and reams of academic research demonstrate—that’s mainly due to changing consumer tastes and productivity gains like robots and computers, not trade. (The state has also gained around 375,000 total non-farm jobs since the North American Free Trade Association and WTO came into effect in the mid-1990s.)

There is also little sign of a “race to the bottom” to keep these factory jobs in the state. NAM estimates that average annual compensation for Indiana manufacturing workers in 2014 was $72,256 (versus $44,806 per year overall), and data from the St. Louis Federal Reserve show relatively impressive wage gains for these employees over the last several years: 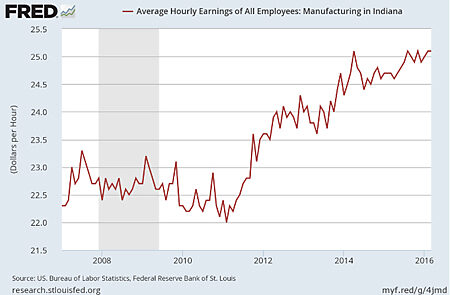 Meanwhile, Indiana has reaped tremendous benefits from its participation in the global economy. Outside of the immense consumer gains that free trade provides (about 90 percent of which accrue to poor and middle-class consumers), the Business Roundtable (BR) estimates that more than 1 in 5 Indiana jobs (more than 812,000) are supported by international trade (including exports and imports), and that these trade-related jobs “grew 7.2 times faster than total Indiana employment from 2004 to 2014.”

Indiana also exported $38 billion worth of goods in 2014 and almost $9 billion in services in the same year (over half to free trade agreement partners), and its top three export markets were Canada, Mexico, and China (yes, China). BR also finds that Hoosier jobs in export-intensive industries pay more and increase employment faster than their less-trade-oriented counterparts.

The same optimistic trends apply to foreign direct investment (FDI) in Indiana. In 2014, for example, more than 160,000 Hoosiers were employed at foreign-owned companies (101,400 of them in manufacturing). Indiana University found the state gained these jobs significantly faster than other Midwestern states since 2010, and projects a lot more of these jobs in the near future: “Between 2012 and 2014…Indiana had 127 FDI announcements valued at $4.6 billion… projected to create nearly 13,300 jobs, or around 4,400 new jobs on an annual basis.” Almost 74 percent of these new jobs were in manufacturing.

These investment trends might surprise you, but they shouldn’t. As I recently demonstrated in a new analysis for the Cato Institute, the United States remains a global investment powerhouse: we are the world’s largest recipient of FDI by huge margins. U.S. multinationals invest about three times as much at home as they do abroad (half of which is in manufacturing); and the United States amassed a whopping $614 billion “manufacturing investment surplus” with the rest of the world between 2000 and 2015. Trump routinely claims that dastardly foreigners are “sucking jobs out of our states,” but the actual facts in Indiana and nationwide show just the opposite to be true.

This isn’t just a bunch of fancy egghead numbers, either. Real-world examples of Indiana’s globalization successes abound, if you’re actually willing to look. One of the best is in little Mishawaka, Indiana, where German-owned Mercedes commissioned a defunct AM General plant that used to make Humvees in order to build and ship new SUVs exclusively to China (yes, China).

The plant employs 200 unionized workers, makes the cars from foreign and domestic parts, and is supposedly the “first time a foreign carmaker has utilized an American owned manufacturer to build their vehicles.” The factory is a great example of how Trump’s simplistic “us versus them” trade message is wholly out of step with the complex, wondrous reality of U.S. manufacturing and global supply chains. It’s also something you rarely, if ever, hear on TV.

Maybe none of this matters. Maybe Trump’s emotional anecdotes about Carrier, Ford, and other horrible, unpatriotic corporations—combined with far too much media credulousness—are sufficient to sway enough Indiana voters to pull the lever for him, regardless of the truth about trade and manufacturing in their state and the country.

Or maybe the  polls are right, and people just don’t know or care very much about trade, and are voting for Trump for reasons that have little to do with his loud promises to tax Chinese imports and start trade wars with some of our closest allies. But whatever the reason, if Trump wins in Indiana, one thing is certain: it will be despite, not because of, the effects of free trade on the Hoosier state.