Vilnius seems very much like a normal European city these days, as do the capitals of the other Eastern and Central European countries. In retrospect, this simple fact is remarkable, because a mere quarter‐​century ago Estonia, Latvia and Lithuania were part of the Soviet empire, and Poland, the current Czech Republic and Slovakia, as well as Hungary, Romania and Bulgaria were still communist states controlled by the Soviets. Back in the mid‐​1980s, most people, including the establishment in the West, thought that these countries would remain communist dictatorships for the foreseeable future.

A few visionaries, such as Ronald Reagan and Margaret Thatcher, thought differently and were widely ridiculed. Others who also thought that the Soviet empire could be rolled back were mocked. I still remember a Business Week magazine column from 1988, “The Quixotic Quest of Robert Krieble.” Bob Krieble founded and built the Loctite Corp. into a major American adhesives company. After he retired, he took on the task of helping supply the anti-communist dissidents in Eastern Europe with fax and copying machines so they could better get out their message. A mere three years later in 1991, Mr. Krieble and the others had the last laugh as all the captive and oppressed nations regained their freedom.

Once the communist yoke had been thrown off, few thought that the newly independent countries could evolve into functioning free-market democracies in a short period of time without major strife and loss of life. Yet it happened, and now the citizens of these countries enjoy both freedom and a much higher standard of living. Some give undue credit to Western aid institutions and advisers. I was one of those advisers, having spent time behind the “Iron Curtain” and considerable time on the ground during the transition and the years immediately after in the former communist countries. Each of the countries had a number of very smart, courageous people who had a solid understanding of how both democracy and free markets worked. I was surprised to find a number of economists in Bulgaria who were very well-versed in the Austrian school of economics and had read many of the works of Friedrich A. Hayek — by passing around smuggled copies. They had rejected Keynesian economics as being too close to the socialism they had all been living through.

The outside advisers were a mixed bag, giving perhaps as much bad advice as good. At one point, I had a confrontation with a World Bank official in Bulgaria who was offering to give its state telecommunications company a loan under the condition that competing telecommunications companies would not be allowed to operate. At the same time, my transition team, sponsored by the National Chamber Foundation and U.S. Agency for International Development, was trying to demonopolize and privatize the old state industries. 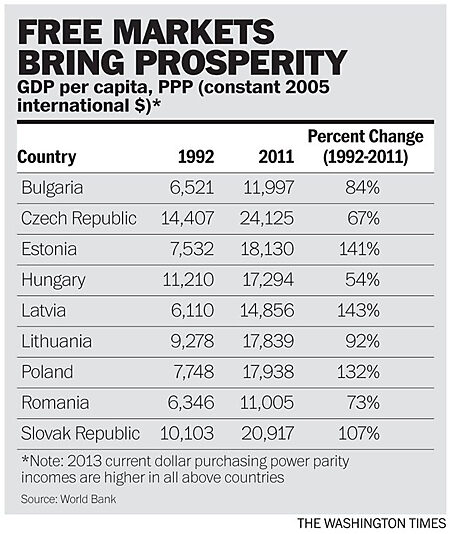 Small groups of brave, free thinkers in many of the countries became the core of the new free-market think tanks, which have become important, constructive influences over the past couple of decades. Those who founded the influential Lithuanian Free Market Institute in Vilnius before the fall of the Soviet Union quite literally risked their lives for the ideas of a free society.

As can be seen in the accompanying table, real per-capita gross domestic product (GDP) has risen sharply in all of the Eastern and Central European countries over the past two decades. Some have done better than others, but all have done far better in terms of real growth than the countries of Western Europe and the United States. Real incomes are converging between East and West. Already, the average Czech lives almost as well as the average Italian or Spaniard and better than the average Greek or Portuguese. The others are not far behind, and within a decade, the average Pole maybe living as well as the average Frenchman.

Each country has made mistakes, notably Hungary, which got off to an early and fast start but then faltered. The Eastern and Central Europeans (with the exception of Hungary) have far lower debt-to-GDP ratios than any of original members of the European Union. Many of the countries have smaller governments than those in the West as a percentage of GDP. Even so, their governments are too large to maximize economic growth, job creation and the general welfare.

The lack of growth in Western Europe hurts the Eastern and Central European countries by reducing the latter’s export opportunities and adding to the general financial instability. Those in the East suffer from high rates of emigration by the most talented and energetic citizens (most often young adults) and, like many of their Western European counterparts, from very low birthrates (below replacement in all the countries). Negative population growth, combined with a rapidly aging population, is not sustainable — so the long run is as bleak as it is for all of Europe. Still, few would have predicted both the economic and democratic civil-society success these captive and oppressed people have attained. Perhaps they will find a way to overcome this demographic challenge as they did with their obstacles a quarter-century ago.