Skip to main content
Live Now
This article appeared in the Arc Digital on May 2, 2020.
TOP

In response to the COVID-19 outbreak, governors and mayors have issued shelter‐​in‐​place orders, closed businesses they have deemed nonessential, and banned gatherings, including church and political assemblies. Are these orders constitutional?

One vocal sector of opinion has answered with a loud “No way!” “Reopen” demonstrators, assembling and recently descending on state capitals, take it as a given that the framers of the U.S. Constitution would approve of their cause. According to the activist group FreedomWorks, “many” rights “are being unconstitutionally suspended by [governors and mayors] acting unilaterally across the country.”

What are some recent examples of unconstitutional violations, according to this perspective? A letter signed by prominent conservatives points to bans on surfing and outdoor play, as well as the failure of state and local authorities to “narrowly tailor” orders to permit a maximum of private activity. (It also cites various bans that are more widely agreed to be improper.) A policy letter from Attorney General Bill Barr has been widely interpreted as endorsing these ideas, promising federal action against local public health orders not only when they overstep civil liberties but also when they result in what is tersely described as “undue interference with the national economy.”

If you want to know whether something is unconstitutional, one group you might ask is judges. And in early rounds of litigation, a reasonably clear—and, to many of us, unsurprising—answer is emerging.

What do Americans think? By a 64 to 24 point margin, according to a YouGov/​Economist poll taken April 22–23, “Americans don’t think state lockdowns during COVID-19 are a violation of constitutional rights.” Sentiment shows some polarization along party lines: “Close to half (47 percent) of Republicans believe these lockdowns are unconstitutional, while just about a quarter (26 percent) of Independents and 10 percent of Democrats say the same.” Of course, polls can’t tell us whether something is unconstitutional; however, they can tell us about the state of public opinion.

If you want to know whether something is unconstitutional, one group you might ask is judges. And in early rounds of litigation, a reasonably clear—and, to many of us, unsurprising—answer is emerging. Some ways in which shutdowns are applied may indeed be unconstitutional, as when a mayor allows a civic group but not a church to convene in numbers, or when a gun shop gets treated less favorably than comparable small businesses because someone in the governor’s office isn’t fond of Second Amendment rights. Those cases, important as they are, change only a few lockdown outcomes. And the remedy that follows — making restrictions neutral and even‐​handed — is different from lifting those restrictions.

As for the argument that lockdowns as such are broadly unconstitutional, that one has begun to reach judges — and fallen on its face.

Business people in Pennsylvania and Michigan have already sued to reopen their businesses, and the judiciary in both states has said no. In Pennsylvania, while three Justices partially dissented, they did so without endorsing the plaintiffs’ contentions of unconstitutionality, instead indicating that they deserved more latitude to develop their case. The Michigan ruling upholding Governor Gretchen Whitmer’s order against challenge was handed down by a judge who earlier served as deputy legal counsel to former Republican Governor John Engler and has advised the state’s Federalist Society chapter.

What about the objection that while modern judges may have lost their spine, earlier judges — such as those in the period of more property‐​rights‐​oriented jurisprudence that preceded the New Deal, or in the Founders’ era — would have recognized lockdowns and business closures as unconstitutional? 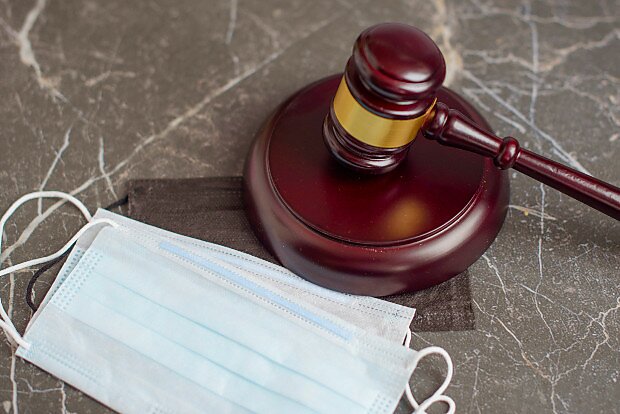 Coronavirus and the Constitution III

As the country begins to reopen, questions abound. Can the government force you to get tested before you go back to work? Can it make you wear a mask whenever you go outside? Please join FTC Commissioner Christine Wilson and Cato scholars Matthew Feeney and Ilya Shapiro to discuss these and other issues.

That’s even weaker. Judges in those periods, like judges today, recognized as uncontroversial a very sweeping state and municipal “police power” to act against the spread of communicable disease. And judges back then were if anything even more deferential toward public health authorities’ decision‐​making than they are today.

During the Spanish Flu pandemic a century ago, prohibition on public assemblies and closure of businesses were common. Were any of these steps ever successfully challenged as unconstitutional? I haven’t been able to find a single instance of that. A couple of cases from around 1900 did rule San Francisco authorities wrong to have mistreated local Chinese‐​Americans on a rationale of disease prevention. But the racial‐​oppression element was significant in those cases — as it would be today if anything similar were tried — and in the leading case there wasn’t even any evidence that the disease was present in the city.

Another leading case from that era, Compagnie Francaise de Navigation a Vapeur v. Louisiana Board of Health (1902), sheds light on the arguments about interstate commerce. Up to that date — which is in and of itself revealing — no general challenge to the constitutionality of a state quarantine law had been heard. The French steamship company that sued mounted a pretty good case that it had been jerked around by the state of Louisiana, which would not let it disembark passengers even though (1) there was in fact no illness on the ship; (2) the company could offer evidence that the state’s supposed fear of contagion was a pretext; and (3) interstate commerce was being directly curtailed as some of the passengers on board would be headed to other states once they got off. Even so, only two justices on the Supreme Court favored the company, and all nine agreed that quarantine was an uncontroversial use of state police power.

As this Congressional Research Service report suggests, courts will only rarely find state public health powers to overstep the Commerce Clause’s protection of interstate commerce; the model case would be if a state exercised such powers so as to lay burdens on out‐​of‐​state businesses from which it arranged to excuse in‐​state businesses. That isn’t a very common complaint against the governors’ and mayors’ orders today, which would not seem to leave a very wide margin for intervention on that ground by the U.S. Department of Justice.

As for the Framers, they were intimately acquainted with the dangers of epidemics, which had ravaged the colonies as well as wiping out much of the Indian population. From its outset, American constitutional law, like the colonial law that preceded it, recognized states’ and cities’ police power during true emergencies to intercept the sorts of otherwise harmless movements and actions that can turn well‐​meaning individuals into vectors of physical harm to others.

Bans on assembly, movement, and badly needed economic activity? Citizens of the early Republic went through all these and much more. Churches shut their doors. People were routinely cooped up in their homes — contrary to some recent speculation, there was no general practice of applying restrictions only to the sick. Not long after the adoption of the new Constitution, the nation’s capital of Philadelphia was struck with a deadly outbreak of yellow fever; persons fleeing the city in the direction of places like Baltimore were turned back at gunpoint, while Alexander Hamilton and his wife Eliza, after surviving the illness, had to undergo quarantine at the behest of authorities in Albany, N.Y. whence they had fled.

In Massachusetts, to take another example, a 1797 law provided that a person “coming from any place out of this state, where the small pox or other malignant distemper is prevailing, into any town within this state,” shall be obliged to obey the commands of selectmen to depart the state “in such manner, and by such road as the said selectmen shall direct.” The measure made it unlawful for any resident to entertain in his house such a person ordered to leave, once warned of the circumstance.

This was the soil in which our constitutional law took root. As Michael McConnell and Max Raskin wrote recently, “History buffs may recall that the first Free Exercise Clause case in Supreme Court history, in 1845, involved the prohibition of open‐​coffin funeral services in a New Orleans church during a yellow fever outbreak.” (The clergy lost, on the noteworthy grounds that the Supreme Court at that time did not even have jurisdiction to intervene.) Likewise, in the famous case of Gibbons v. Ogden, 1824, Justice John Marshall observed in an aside that state quarantine and health laws “are considered as flowing from the acknowledged power of a State to provide for the health of its citizens.”

All of this can seem discouraging to those of us of a libertarian disposition who believe above all in the protection of individual rights as the proper function of government. After the immediate threat to life has passed, both we and the courts must be vigilant that constitutional rights now bent spring back upright, and that governments promptly and fully relinquish whatever emergency powers they have flexed. But we also need to face the facts about this country’s actual constitutional law, which from the Revolution to the present day has been united in treating legitimate government power as at its zenith during a “hot” emergency of deadly contagion.

It can be tempting to spin tales of constitutional law as we might like it to have been, and pass that off as the actual state of the law. We who believe in law as law should especially resist that temptation.