Skip to main content
Live Now
This article appeared on The Hill (Online) on April 7, 2017.
TOP

Things escalated fast. Last Friday, key administration officials UN Ambassador Nikki Haley and Secretary of State Rex Tillerson publicly acknowledged that they would no longer seek to oppose the Assad regime. On Thursday evening, the Trump administration fired 59 Tomahawk missiles at a Syrian airfield in response to the Assad regime’s use of chemical weapons on civilians.

Though Trump’s poor impulse control is surely unsurprising to anyone who experienced the 2016 presidential campaign, it is particularly worrying when it involves life‐​or‐​death military questions.

Whether or not you agreed with this specific decision, the complete reversal — in only six days — of the Trump administration's policy on Syria should worry anyone who cares about the future of U.S. foreign policy.

For starters, the new president seems to be prone to making snap judgments on the use of force. In his early days in office, Trump ordered a Navy Seal team into a risky mission in Yemen, resulting in the death of one U.S. soldier and several civilians. He apparently made that decision over dinner. Trump’s “secret plan to defeat ISIS” may remain unknown, but he has chosen to escalate U.S. airstrikes, resulting in substantially higher civilian casualties, and has sent thousands more troops to the region.

Though Trump’s poor impulse control is surely unsurprising to anyone who experienced the 2016 presidential campaign, it is particularly worrying when it involves life-or-death military questions. The Trump administration’s failure to appoint officials to key national security appointments seems to have resulted in a military-heavy decision-making apparatus, which prizes operational over strategic considerations. 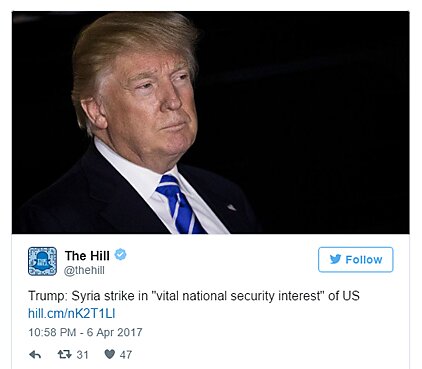 Yesterday’s airstrikes are a case in point. They were primarily symbolic, barely denting the capability of the Syrian military. And they certainly sent a message, proclaiming, as Donald Trump did, that “it is in this vital national security interest of the United States to prevent and deter the spread and use of deadly chemical weapons.” But the administration appears to have given little thought to what happens next.

Suppose the Assad regime ignores these strikes and chooses to use chemical weapons again. The president will then be faced with a choice: if he escalates, he must commit more U.S. forces to the quagmire in Syria, potentially overthrowing the Assad regime, risking conflict with Russia, and strengthening extremist groups in Syria. If he fails to respond, Trump will have admitted that Assad called his bluff and succeeded.

And while the administration’s efforts to avoid Russian casualties luckily prevented escalation, the strikes were condemned by the Russian Ministry of Defense, which promised to strengthen Syrian air-defense capabilities. Between this, and the apparent suspension of the “deconfliction channel,” designed to prevent mid-air collisions between Russian and U.S. planes, yesterday’s actions will raise tensions in Syria, make future airstrikes more challenging, and add to the complexity of the anti-ISIS campaign.

At the same time, Trump’s sudden U-turn on Syria policy denied the American public any chance to debate the wisdom of further entangling ourselves in Syria’s messy and complex civil war. Donald Trump may indeed believe that humanitarian concerns and preventing chemical weapons use is in the national interest, but this is a notable shift from his campaign statements. In a few short weeks, he has gone from deriding America’s wars to adding to them. 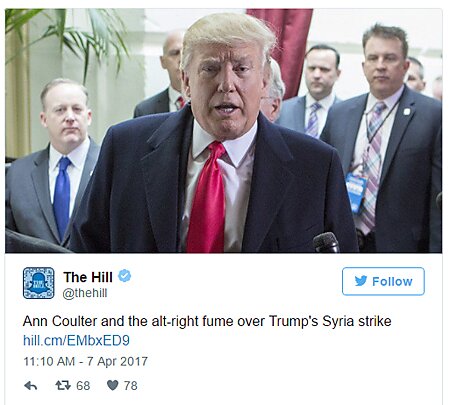 More importantly, Trump's snap decisions provided no real opportunity for congress to weigh in on the wisdom of airstrikes against the Assad regime. Indeed, it remains unclear what legal authority these strikes were actually conducted under. The 2001 AUMF — under which most anti-Al Qaeda and anti-ISIS strikes are conducted — certainly doesn't cover the Syrian state.

There is no question that the Assad regime has committed barbaric acts during the country's brutal civil war. It is easy to see how the horrifying images of Tuesday's chemical weapons attack might have swayed Trump's decision-making, making a short, sharp military strike seem suddenly attractive.

Indeed, both Donald Trump and Barack Obama effectively faced the same problem — Syrian government chemical weapons use against civilians — but Obama rejected military strikes after considering the likely negative consequences. And while Obama has often been criticized for pursuing a diplomatic solution instead, he did actually deter Assad: no further chemical weapons were used during his presidency.

Only time will tell whether Trump's military strikes achieve the same result. Yet his capricious reversal on a key foreign policy issue and his lack of strategic thinking remains the bigger concern. Snap decisions based on emotion are rarely a good idea in questions of war and peace. This president seems determined to prove it.