How do we “right‐​size” government? Even today, when discussing the proper size of government, we tend to use the vague terms “left” and “right,” terms inherited from the French Revolution of 1789, when supporters of the king sat on the right of the National Assembly and supporters of the Revolution sat on the left. The near vacuous nature of these terms can be quickly illustrated by looking at aggregations of groups said to be “on the left” and “on the right.” The left includes not just progressives, but also anarchists, socialists, and communists. And the right includes not just conservatives, but also monarchists and neoliberals. It is time to retire a vocabulary so lacking in real meaning. But how do we at least ask the right questions about right‐​sizing government?

How do we “right-size” government? Even today, when discussing the proper size of government, we tend to use the vague terms “left” and “right,” terms inherited from the French Revolution of 1789, when supporters of the king sat on the right of the National Assembly and supporters of the Revolution sat on the left. The near vacuous nature of these terms can be quickly illustrated by looking at aggregations of groups said to be “on the left” and “on the right.” The left includes not just progressives, but also anarchists, socialists, and communists. And the right includes not just conservatives, but also monarchists and neoliberals. It is time to retire a vocabulary so lacking in real meaning. But how do we at least ask the right questions about right-sizing government?

As a starting point, we know today that democratic governments perform much better in the aggregate than totalitarian or authoritarian governments. The evidence is striking across many indicators. Freedom House, in its World Survey of Economic Freedom, 1995–96, calculated that 24 percent of the world population living in “free” and “partly free” nations produced 86 percent of total world output, and the 66 percent of the world population living in “mostly not free” and “not free” nations produced only 13 percent of global output (Messick 1996: 9).1 While the past rapid economic growth in China is an outlier, democratic nations as a whole continue to strongly outperform economically. Democracies rarely, if ever, engage in major wars with other democracies. When engaged in war, democracies win at a higher rate than nondemocracies. Democracies have far better records on human rights; in contrast, totalitarian regimes have slaughtered their own and neighboring populations in the millions, as we see with the Holocaust under the Nazis, Mao’s starvation of millions of Chinese, or Pol Pot’s slaughter of over 20 percent of the population of Cambodia. Democracies do not themselves experience famines, which we now know to be a product of nondemocratic governments, as in North Korea today, or colonialism, as under British rule in India and Ireland. Democracies even have better environmental records.2

Most important, full or “liberal” democracies not only elect their leaders through free and regular elections, but protect important human freedoms: religious liberty, freedom of speech and association, freedom of the press, freedom to petition the government for redress of grievances, due process of law, equal protection under the law, property rights, and the right to a fair and speedy trial. But while living in a liberal democracy (not just an electoral democracy that has elections but only curtailed freedoms) is one of the greatest blessings an individual can enjoy, democracies too have government failure—just an order of magnitude less failure than totalitarian and authoritarian regimes.3 Today, thanks to the work of James M. Buchanan on Public Choice Theory, which won the Nobel Prize in Economics for him, and which I refer to as “Government Failure Theory,” we know a great deal about the causes of government failure.4

There is a popular conception that markets are about “greed” and government about “the greatest good for the greatest number.” But this popular conception is a myth for both markets and government. Both have strengths and weaknesses and an important role to play. And both need checks where they fail. The challenge is in understanding the strengths and weaknesses of each—and in implementing appropriate checks on both.

The Strengths and Weaknesses of Markets

Properly functioning markets, or informed free exchanges, have some remarkable qualities. First, a transaction would not take place unless those on both sides of the transaction believe that they will be better off from the transaction, based upon their own value choices. So, the transaction is a “win-win” for both parties, as well as a “win” for both as assessed by their own values, not the values of some other party. These remarkable starting qualities of markets are not accurately described as “greed.” Second, markets have low “transaction costs,” that is, low costs associated with a simple exchange or transaction. Finally, markets, in society as a whole, are remarkably contextual (taking place daily with millions and millions of transactions) and, as such, characteristically have reasonably good information available to the participants.

Markets, however, have their needs and problems. First, we need government to create stable property rights, contracts, and a host of laws to facilitate stable expectations, enable efficient exchange, prevent theft and crime, and maintain macroeconomic stability. Second, markets can generate “market failure” where a transaction imposes costs on nonparties to a transaction (or society as a whole). This is the classic “negative externality.” An example would be generating environmental costs when a factory making “widgets” pollutes the water or the atmosphere in its manufacturing process. There can also be a reverse market problem of “positive externalities” when markets will not produce enough because the stream of benefits cannot be fully captured in exchange. This is why we create intellectual property and why government has a role in funding basic research in health and science. There can also be settings in which information is lacking for one of the participants in ways that distort efficient functioning.

Finally, there are a host of functional areas where markets will not function optimally alone. These include “insurance failure” (where those presenting high risks will be unable to obtain insurance), “monopoly” (where prices will be distorted by a single supplier), “public goods” (areas such as defense spending generating “free-rider” problems of those not opting in if they believe others will bear the cost), and a critical problem for any caring democracy—an appropriate “safety net” for those in society, who because of illness, injury, or otherwise, are not able to work.

Most of the above concepts are likely well understood by the well-educated citizen. But what follows, much of which traces to public choice theory, is not nearly as well understood. Indeed, while there is general understanding of “market failure,” as well as a generalized angst about the performance of government, there is far less understanding as to why we have “government failure.”

Before we get to the principal mechanisms underlying government failure, it is important to note that when governments act, they do so with certain important disadvantages to properly functioning markets. First, government actions are not “win-win,” but instead (even when good) will simply generate greater aggregate costs than benefits. This means certain groups will likely be negatively affected and that the values advanced through the government action will be some governmental value choice, not necessarily that of the individuals affected.

Second, government action is not characterized by low transaction costs. When government acts, it must engage in collective law making, publicize the laws, and then enforce violations. Frequently, there are not just costs known to those enacting such laws but also a variety of unanticipated costs. Rent control is a good example. In seeking to assist low-income needs through holding rents down, unanticipated and unwelcome costs may appear in the form of reduction in maintenance of the facilities, and a reduction in supply of new rental housing. Price controls, with vast unanticipated consequences, as with President Nixon’s effort to hold down inflation by mandating price controls, provide well-known examples. Transaction costs in governmental actions more fully include creating and enacting rules and regulations, enforcement of the rules and regulations, inefficiencies in regulatory mode chosen, effect on incentives of taxes and transfer payments, and unwelcome unintended consequences.

Government is a necessary part of our lives. But when government gets too profligate, as we are witnessing in the unfolding tragedy of Greece, it literally destroys the lives and hopes of its people. Short of the Greek level of collapse, government failure imposes unnecessary costs on all of us. Today we know something of the causes of such government failure. As such, it is the responsibility of our national leaders to work to reduce that failure. There is no magic here. Differences over appropriate safety nets and how we assess costs and benefits will remain large. But hopefully a framework that better identifies government failure may prove useful in thinking about the problems and ultimately in right-sizing our government.

1 The percentages of governments in the four categories, of course, have changed over those used in the 1995–96 survey. Freedom House each year also publishes Freedom in the World, a survey of freedom for every nation in the world, across many indicators. For the 2019 Freedom in the World survey see https://freedomhouse.org/sites/default/files/Feb2019_FH_FITW_2019_Report_ForWeb-compressed.pdf.

2 For a fuller discussion of the superiority of “liberal” democracies to authoritarian and totalitarian regimes, see Moore (2004: 2–7).

5 There is, I believe, a strong argument for strengthening the family as one of the antidotes to an overly large government. Yet many of our tax and welfare policies seem to create incentives, whether intentional or not, that diminish the family.

6 For the United States, a federal structure, there is yet another important set of issues not dealt with in this article. That is, at what level, state or federal, should a particular governmental activity be carried out? Clear federal responsibility certainly includes foreign affairs, defense, and certain central bank functions. On the other side of the scale, one advantage of leaving an issue for the 50 states is the potential for real-world comparison and competition.

7 Totalitarian, authoritarian, and other nondemocratic governments have more profound modalities generating their massive government failure, particularly the ability of the absolute rulers or “vanguard party” to do whatever they like, and externalize costs on the rest of the population.

8 There is a limited ability to sue the U.S. government for certain torts, for takings in contravention of the Constitution, and for certain administrative and civil rights violations. Suits against foreign governments are even more limited—with “sovereign immunity,” a doctrine stemming from old thinking that “the king can do no wrong,” still largely dominant over a genuine rule of law.

11 Some of the real-world examples used by Judge Breyer, from cases that had come before him as a Court of Appeals Judge on the Fifth Circuit Court of Appeals, were outrageous in generating massive costs for only minimal risk reduction.

12 “What goes on these days in the District of Columbia school system borders on child neglect. Here it is, three months into the school year, and as Post staff writer DeNeen Brown reported yesterday, hundreds of students are trying to learn without books. That is an outrage. It is rivaled in absurdity only by the alibis being served up by school officials. A $500 million school system that fails to supply students with textbooks is misnamed. An educational disgrace is more like it” (Washington Post, December 2, 1995). 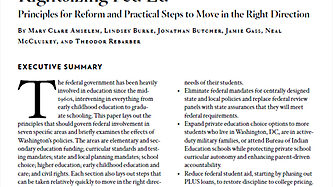 Trump Is Right to Call Them ‘Government Schools’