The Federal Reserve started to pay interest on bank reserves during the Great Recession in 2008. These payments set an effective floor to the fed funds rate and allowed the Fed to determine short‐​term interest rates with great precision. Together with a greatly expanded balance sheet, the interest rate paid on reserves became the primary monetary policy tool by which the Fed implemented its monetary policy decisions during the last decade.

But the payment of interest on bank reserves had several side effects that were perhaps not fully recognized at the time that the decision was made. By paying interest on reserves, the Fed not only contributed significantly to the earnings of its member banks, but also influenced the size of the income transfers that the Fed regularly makes to the Treasury.

Consequently, the effects of monetary policy actions became directly linked to the operating revenues of the federal government and by this to fiscal policy.

As the Fed increasingly influences important fiscal variables, such as the size of the federal deficit, there looms the danger that politicians will attempt to influence the monetary policy actions of the Fed, thereby endangering the independence of the institution.

The Legislative History of Paying Interest on Reserves

The Federal Reserve began to pay interest on bank reserves in 2008 as the economy plunged into the Great Recession. Milton Friedman (1960) and others long argued that the Fed should compensate banks on their reserve holdings on economic efficiency grounds. Following this advice, Congress passed the Financial Services Regulatory Relief Act in 2006, which granted the Fed the authority to pay interest on reserves effective October 2011. When many banks experienced significant financial problems at the beginning of the Great Recession, Congress advanced the effective date of this provision to October 2008 to bolster the earnings of the struggling banks and to prevent additional bank failures. On October 9, 2008, the Federal Reserve began to pay interest to banks on both required and excess reserves.

While the interest payments on required reserves were justified on the economic efficiency grounds emphasized by Friedman, the Fed also started to pay interest on the excess reserve holdings to set a floor to the fed funds rate. The interest paid by the Fed on excess reserves established an effective lower bound to the fed funds rate because banks would not lend to each other at a lower premium than they could earn on their safe deposits at the Fed. This history is well documented by Selgin (2018) and Ireland (2019).

The Period of Low Interest Rates and Balance Sheet Expansion 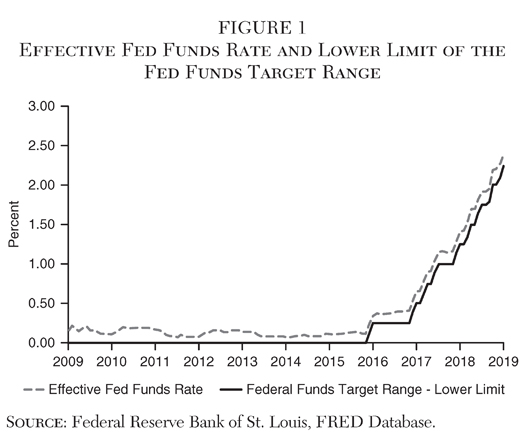 At the same time that the Fed pursued its low interest rate policy, it also expanded its balance sheet rapidly. Before 2008, total assets held by the entire Federal Reserve System amounted to less than $1 trillion. As shown by the solid line in Figure 2, total Fed assets increased to approximately $2 trillion in 2009-10 as the Fed engaged in its first large‐​scale asset purchase program (also known as quantitative easing, or QE). It did this by buying up large amounts of Treasury and mortgage‐​backed securities to provide liquidity to the markets. In the ensuing years, total Fed assets increased to over $4.5 trillion by 2015 as the Fed engaged in further QE operations that were not so much designed to provide needed liquidity to the financial markets, but to make plentiful credit available to the seriously ailing economy. By purchasing mortgage‐​backed securities and holding them on its balance sheet, the Fed also became increasingly involved in the housing and mortgage markets. 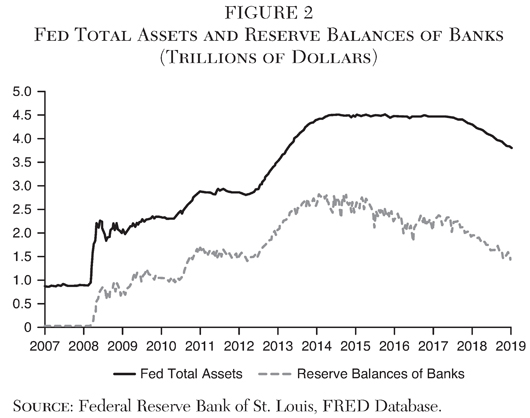 As the Fed bought up the Treasury and mortgage‐​backed securities, it paid for them by directly crediting the accounts of the sellers at the Fed, generally banks or other financial institutions. These credits counted as reserve assets for the banks. Thereby, the asset purchase programs of the Fed resulted in large reserve increases for the banks.

Interest Payments on Reserves to the Banks Increase

Former Fed Chairman Ben Bernanke and Don Kohn (2016) have argued that the subsidy implicit in these payments to the banks amounted to only about 13 basis points and therefore “provides no meaningful subsidy … as it will be evident that [the banks] are earning about the same on their reserves as they could receive in the open market.”

As the Fed began to raise interest rates in 2015, it did so by raising the floor to the fed funds rate and thereby also the interest rate that it paid on bank reserves. It did so in small steps of 25 basis‐​points each. But the cumulative effect was highly significant. As the fed funds rate rose to over 2 percent by 2018, the Fed wound up paying more and more to the banks on their reserves. As shown in Figure 3, the total amount paid to the banks rose rapidly from $12.0 billion in 2016 to $25.8 billion in 2017 and reached $38.5 billion in 2018. 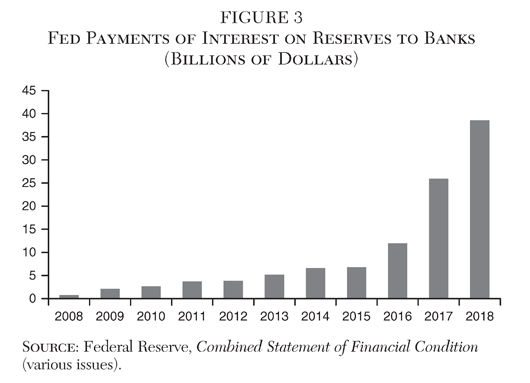 Such large payments cannot remain inconsequential for the operations of the Fed. The $38.5 billion transfer from the Fed to the banks in 2018 was about five times as large as the total operating budget of the entire Federal Reserve System, which amounted to $7 billion in the same year.

Moreover, the interest payments on reserves were also a significant source of income to the banks that received them. They accounted for over 16 percent of the total banking system profits, which amounted to $237 billion in 2018.

As the Fed’s Income Rises, the Treasury Raids Its Coffers

The large amount of interest payments received by the Federal Reserve System on its huge asset portfolio also had consequences for the financing of new government initiatives and, indeed, the entire U.S. budget. The increased earnings by the Fed on its large asset portfolio were simply too much of a honeypot not to tempt Congress and the administration.

In the aftermath of the Great Recession, the Dodd‐​Frank Act of 2010 (P.L. 111–203) established the Consumer Financial Protection Bureau (CFPB) as an agency funded entirely from the Federal Reserve budget. The CFPB budget grew rapidly from $9 million in its founding year of 2010 to $142 million in the following year — its first full year of operations. By 2017, the budget had reached $646 million and plateaued after that at $630 million in the following year.1

By financing the budget of the CFPB directly from the Fed’s resources, the Obama administration bankrolled the new Bureau in a permanent manner on an off‐​balance‐​sheet basis and without having to ask Congress for additional annual appropriations. Essentially, the Dodd‐​Frank Act made the CFPB a financial appendage to the nation’s central bank, thereby breaching the long‐​established barrier between fiscal and monetary policy.

Once the precedent of financing federal projects by raiding the Federal Reserve’s coffers was broken, it did not take a long time until additional Federal Reserve funds were appropriated for general government expenditures. Section 32202 of the FAST Act of 2015 (P. L. 114–94) appropriated all surplus funds in excess of $10 billion from the Fed’s capital account to the U.S. Treasury for transportation projects.

While the FAST Act left the paid‐​in capital of the Federal Reserve’s member banks untouched, it also reduced the statutory dividends that the Fed pays to its large member banks, namely those with over $10 billion in assets. The dividend rate paid to these banks was reduced from 6 percent to the rate that could be earned on 10‐​year Treasury securities, which was about 2 percent at that time. Obviously, this action resulted in reduced payments to the banks on their capital and brought additional savings to the Federal Reserve and thereby to the U.S. Treasury.

By these actions, the government again reached into the coffers of the Federal Reserve to finance other governmental projects without having to raise new taxes or issue new federal debt.

Two consequences resulted from these developments: First, of all, it reduced the overall capital‐​to‐​asset ratio of all the Federal Reserve Banks to a miniscule 1 percent, making them probably the least‐​well‐​capitalized banks in the country. Second, these actions increased at least temporarily the funds transferred by the Fed to the U.S. Treasury, thereby helping to shore up the governments financial picture.

As the Fed Tightens Monetary Policy, Its Payments to the Banks Increase While Transfers to the Treasury Decline 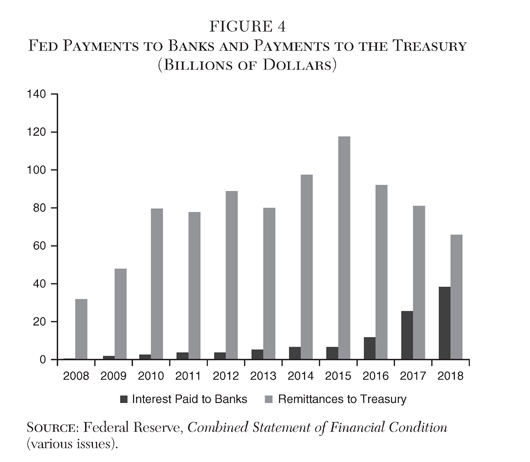 The increased interest payments by the Fed to the banks on their reserves and the consequent reduction in payments to the U.S. Treasury also established a new direct interrelationship between monetary policy and fiscal policy. While the Federal Reserve and the government had operated heretofore essentially independent levers of monetary and fiscal policy, the payment of interest on reserves linked the two policy tools in a direct manner.

Furthermore, it does not take much imagination to envision the day when the interest payments to the banks on their reserve balances might exceed the entire operating surplus of the Fed. For instance, if the Fed is forced to tighten policy, it will do so by raising the interest rates that it pays to the banks on their reserves. Given its current balance sheet composition, every 1 percentage point increase in the interest rate paid on reserves will cost the Fed approximately $15 billion in additional payments to the banks. Other things equal, a fed funds rate of approximately 6 percent might wipe out the entire earnings of the Federal Reserve System and any further interest rate increases might well result in actual operating losses for the Fed.

This conclusion does not even factor in potential capital losses on the Fed’s long‐​term asset portfolio of Treasury and mortgage‐​backed securities. As current interest rates rise, the capital value of these securities will be commensurately reduced. While the Federal Reserve typically does not use mark‐​to‐​market accounting, the losses will nevertheless be real and turning a blind eye to them might constitute a questionable accounting practice. In any case, the sale of such value‐​impaired securities would force a recognition of the capital losses incurred.

Moreover, as the Fed continues to shrink its asset portfolio, the Fed’s own earnings will be commensurately reduced. Every $1 trillion in balance sheet reduction will result in approximately $25 billion to $30 billion in reduced interest earnings to the Fed. Of course, part of this earnings loss may be partially offset by the likely reduction of interest payments to the banks as their reserve holdings are also apt to shrink as the Fed reduces its asset portfolio. But there is not necessarily a one‐​to‐​one correspondence between these two developments.

Together, the higher interest rates paid to the banks on their reserves and the lower earnings from a reduced balance sheet will significantly decrease the net income of the Fed and thereby its remittances to the Treasury. As a result, politicians on both sides of the political spectrum may well blame the Fed for making excessive payments to the banks and for growing Treasury deficits.

As a consequence of the large‐​scale asset purchases by the Federal Reserve during its quantitative easing operations that began during the Great Recession in 2008, the Fed’s interest income increased rapidly. The additional income was partly used to pay interest on reserve balances held by the banks at the Fed, while the remaining surplus was used to finance other governmental programs, such as the Consumer Financial Protection Bureau and the U.S. highway system. The remaining surplus funds were then transferred regularly to the U.S. Treasury.

By these actions, a new financial link between monetary policy actions and Treasury revenues was established, thereby directly intertwining monetary and fiscal policy. Unless the policies of maintaining a large balance sheet and paying interest on reserves is reversed, increased political pressures may well endanger the independence of the Fed in the formulation of monetary policy and threaten the position of the Fed as a separate and independent government agency.

1 For the detailed data, see the Annual Budget of the CFPB (various issues).

Robert Heller is a former member of the Board of Governors of the Federal Reserve System and former President and CEO of VISA U.S.A.