• understand that their support for intervention obscures the existence of a strong restraint‐​minded constituency in the United States;
• know that fears about terrorism and humanitarian concerns remain pertinent for restraint‐​minded policymakers; and
• focus on effective issue framing to help build support for a more restrained foreign policy.

Since the end of the Cold War, a strong bipartisan consensus has emerged in favor of frequent American military intervention. Even President Obama, who came into office calling for greater restraint than his predecessor, expanded the "war on terror," engaged in regime change in Libya, and decided against withdrawing U.S. troops from Afghanistan. Facing vocal critics who seek to increase American intervention not just in the Middle East but also in conflicts throughout the world, President Obama was unable to implement many of the more restrained policies he advocated.

Given this environment, the next president should know that there is a significant "restraint constituency" among Americans, despite the interventionist tendencies found on both right and left. This constituency — which cuts across party lines and represents roughly 37 percent of the public — exhibits a reliable disposition toward foreign policy restraint, opposing the use of military force in all but a few cases. That constituency contrasts with an "interventionist constituency," which represents about a quarter of the public and supports much more aggressive efforts to promote American interests abroad. Since neither constituency's core followers represent a majority, the deciding voice between intervention and restraint in foreign policy debates belongs to the 40 percent of the public that falls somewhere between the two camps.

Though the restraint constituency enjoys an advantage on many important foreign policy issues, public fears about terrorism and other global conflicts will continue to be a significant challenge for restraint-minded policymakers. Framing world events as "other people's business," reminding the public of the costs of major war, and pursuing an active noninterventionist counterterrorism strategy can help policymakers encourage public support for a more restrained foreign policy.

In the broadest sense most Americans agree that the United States should play some sort of role in world affairs. The best-known poll question on this topic asks whether the United States should "take an active part" in or "stay out" of world affairs. The proportion of respondents who say "take an active part" has ranged between 60 percent and 70 percent since the mid-1980s. What such surveys do not communicate clearly, however, is what exactly people mean when they answer them. In the case of military intervention, taking an "active part" could mean anything from contributing to a peacekeeping mission to supporting frequent full-scale regime change of a hostile regime, while "stay out" could mean anything from cutting ties with allies to rejecting responsibility for resolving foreign conflicts.

We can develop a more complete picture by assessing people's beliefs on two key fundamental questions regarding intervention and the use of force. The first question concerns how much effort the United States should make to solve the world's problems. The second concerns how often the United States should turn to military force to promote national interests. Figure 77.1 provides a snapshot of Americans' underlying attitudes along these two dimensions.

With these answers in hand we can begin to identify competing predispositions toward foreign policy. Some Americans — those labeled here the restraint constituency — feel that the United States should not seek to take the leading role among all nations to solve the world's problems and believe that the United States should rarely use military force. Those who answer the opposite — labeled here the interventionist constituency — believe the United States should take the leading role and support the frequent use of military force to promote American interests. Figure 77.2 combines responses to both questions, helping identify and measure four distinct postures toward foreign affairs. 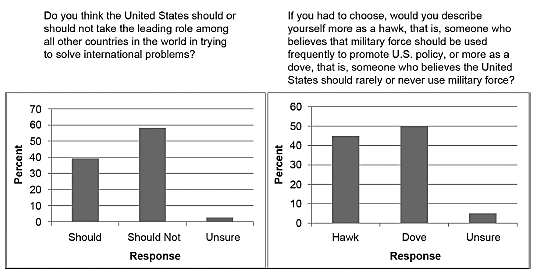 The American public is divided over the fundamental questions facing the nation regarding foreign policy. The restraint constituency is the largest single bloc at around 37 percent, while the interventionist constituency comprises a smaller but still significant 24 percent. The remainder of the population holds views that are neither consistently restrained nor consistently interventionist.

These predispositions toward restraint and intervention are just that — under certain conditions, even restrainers will support intervention and interventionists will not. At any particular moment, Americans' opinions reflect not only these predispositions but also information coming from political leaders and the news media about the world. More recent polling on the Islamic State in Iraq and Syria (ISIS), for example, illustrates that support for an aggressive response has risen considerably across all groups as concerns about the threat posed by ISIS have grown.

The Politics of Restraint Today

The shifting context of international security and domestic politics provides both opportunities and challenges to policymakers trying to chart a restrained path in foreign policy. 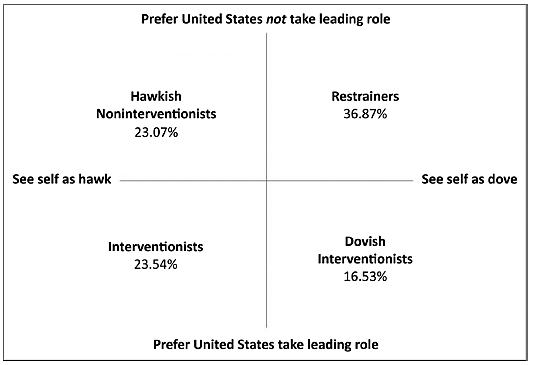 Today, three major factors work in favor of restraint. The first is war fatigue. Large majorities remain convinced that both the wars in Afghanistan and Iraq were mistakes. With over 7,000 U.S. military personnel killed and tens of thousands more wounded, and trillions of dollars spent killing terrorists and "exerting influence" in the Middle East and elsewhere, many Americans are simply convinced it is time to focus more on domestic concerns. Along these lines, a 2016 Pew survey found that 70 percent of the public wants the next president to focus on domestic issues compared with just 17 percent who want to see a focus on foreign policy. One possible interpretation of this finding is that a growing number of Americans see little connection between military intervention and American security, especially given how few terrorist attacks have occurred on American soil since 9/11. As a result, fewer may now believe such efforts are worth the high costs in lives and money and the lack of attention paid to domestic issues. Such poll findings establish a high burden of proof for future intervention. Those seeking to repeat a troop-intensive intervention in the Middle East will have to not only explain why the security risk justifies such an action but also reassure the public that the next ISIS will not emerge in its aftermath. 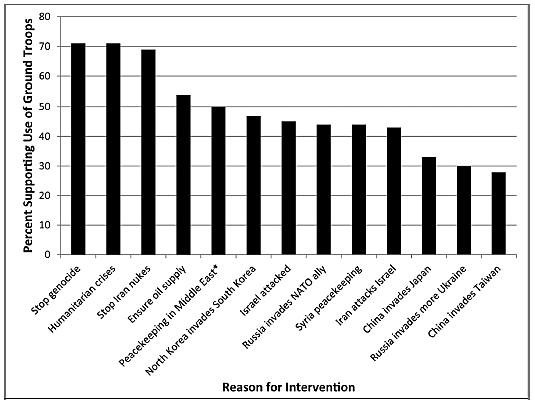 NOTE: NATO = North Atlantic Treaty Organization; *Original survey question = "To be part of an international peacekeeping force to enforce a peace agreement between Israel and the Palestinians."
SOURCE: Smeltz, Dina, and Ivo Daalder. Foreign Policy in the Age of Retrenchment: Results of the 2014 Chicago Council Survey of American Public Opinion and US Foreign Policy. Chicago Council on Global Affairs, 2014.

At the same time, however, the emergence of ISIS clearly represents a significant challenge to a restraint-minded president. The group's barbarism and military success, along with the attacks in Paris and San Bernardino, have driven public support for an aggressive response to levels not seen since the early days after 9/11. Drawing on the Chicago Council on Global Affairs 2015 survey, Table 77.1 reveals public support across party lines for a host of counterterrorism activities.

Finally, looking beyond the temporary effects of global events, the situation today reflects generational shifts in public opinion. The data reveal that the restraint constituency has been growing as younger and less intervention-minded Americans start to replace older, more interventionist Americans. The millennial generation, born between 1980 and 1997, is the most restrained yet, with both Democratic and Republican millennials more likely to fall into the restraint constituency. Figure 77.4 illustrates the generational shift toward restraint. 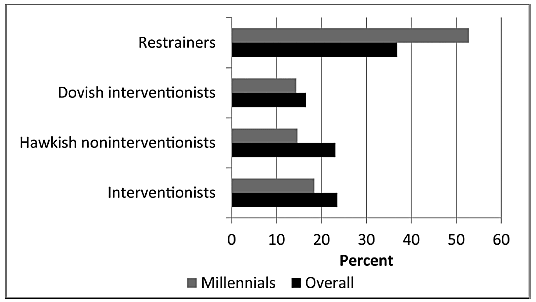 The Road Ahead: Priming the Restraint Constituency

Continued clashes between the restraint and interventionist constituencies are inevitable. Both camps can rely on a core of followers to support their positions, and both have illustrated the ability — on different issues — to command majority support. Thus, the key questions are these: Under what conditions will the restraint constituency win the day? And how can policymakers help make that happen? Restraint-minded policymakers can make the strongest case possible in various ways.

Most important, policymakers should assert a "civil conflict" frame when discussing the situation in places like Syria, Iraq, Afghanistan, and any future failed or troubled state. Historically, the restraint position has been most compelling when Americans believe they are being asked to intervene to resolve other nations' internal problems, while interventionist arguments have been strongest when Americans are asked to take action against a group or nation that poses a direct threat to the United States. In reality, of course, public perception often depends in large part on how the president, other political leaders, and the media frame the issue in the first place.

The Syrian civil war provides an excellent illustration of this dynamic. In 2013, the popular perception was that, although tragic, the situation was above all a civil war and primarily Syria's problem. As a result, 68 percent of the public told pollsters that the United States did not bear responsibility for Syria, and a similar majority opposed sending troops or even providing aid to the rebels fighting Assad. Yet by 2015, a large percentage of the public saw Syria not as a civil war but as a battlefield on which to confront the threat of terrorism, largely because of the attacks in Paris and San Bernardino.

Restraint-minded policymakers should also invoke the length and cost of the wars in Afghanistan and Iraq, along with the chaos that both created, including the birth of ISIS. Even as Americans indicate a desire to move more aggressively against ISIS, they remain extremely wary of a full-scale ground war. To the extent that political leaders can keep the public focused on the dangers of any military engagement, they can reduce the appeal of calls for more intervention.

Finally, policymakers, especially the president, should emphasize noninterventionist strategies for counterterrorism. It is clear that the fear of terrorism is the most likely cause of future American intervention abroad in the near to medium term. And though nothing can completely eliminate calls from the interventionist constituency to play whack-a-mole abroad to combat terrorist groups, the majority of the public traditionally prefers exploring nonmilitary means of solving problems over the use of force. If policymakers highlight an active program of nonmilitary counterterrorism efforts, calls for military intervention are not likely to garner public support.

Thrall, A. Trevor, and Erik Goepner. "Millennials and U.S. Foreign Policy: The Next Generation's Attitudes toward Foreign Policy and War (and Why They Matter)." Cato Institute White Paper, June 16, 2015.