As you can tell from our blog volume, there’s been a blizzard of new and significant climate findings being published in the refereed literature, and here’s some things You Ought to Have a Look at concerning the recent “hiatus” in warming and what might happen to our (now) post-El Niño climate.

With President Trump still deciding on U.S. participation in the Paris Climate Agreement, new research suggests the Earth’s global mean surface temperature (GMST) will blow past the so-called 1.5°C Paris target in the next decade. But before making that ominous prediction, Henley and King (2017) provide us with a good history lesson on a taboo topic in climate science circles: the recent global warming “hiatus” or “pause” from 1998-2014. One could be forgiven for thinking the hiatus was “settled science” since it featured prominently in the 2013 IPCC AR5 assessment report. But a concerted effort has been made in recent years to discount the hiatus as an insignificant statistical artifact perhaps based upon bad observational data, or a conspiracy theory to distract the public and climate policymakers. Even acknowledging the existence of the “hiatus” is sufficient to be labeled as a climate change denier.

Social scientists, psychologists, and theologians of all stripes feared that widespread community acknowledgement of the hiatus would wither support for climate policy at such a pivotal juncture.

In a 2014 Nature Commentary (Boykoff Media discourse on the climate slowdown) saw the rise of the terms “hiatus and pause” in the media in 2013 as a “wasted opportunity” to highlight the conclusions of the IPCC AR5 report, which in itself ironically struggled with explaining the hiatus/pause (IPCC: Despite hiatus, climate change here to stay. Nature September 27, 2013). Amazingly, in a Nature interview a week prior to AR5’s release, assessment co-chair Thomas Stocker said this:

Comparing short-term observations with long-term model projections is inappropriate. We know that there is a lot of natural fluctuation in the climate system. A 15-year hiatus is not so unusual even though the jury is out as to what exactly may have caused the pause.

Claims that there might be something fundamentally wrong with climate models are “unjustified unless temperature were to remain constant for the next 20 years,” he said.

Except there was something fundamentally wrong with the climate models: they missed the pause! The IPCC was caught flat footed and their dodgy explanations were woefully inadequate and fueled continued questions about the credibility of future warming forecasts based exactly on those deficient climate models. What’s going on with this hiatus? A cacophony of explanations has filled the literature and media with several dominant themes: do not believe your lyin’ eyes – the data is wrong – and even if it is not, you are using it wrong. Karl et al. 2015 fixed the SST and buoy data, and (erroneously) claimed to have gotten rid of it. Cherry picking! The heat is sequestered in the depths of the ocean or the aerosols covered up the greenhouse gas signal. It’s enough to make you think climate “science” might not know what it is talking about!

Only a few years since the last (2013) UN climate report, there is now a strong scientific consensus on the cause of the recent global warming hiatus as well as the previous “big hiatus” from 1950s-1970s: a mode of natural variability called the Interdecadal Pacific Oscillation (IPO) which could be colloquially called El Niño’s uncle. The mode operates on longer time scales than El Niño but it is intimately related as a driver of Pacific Ocean heat exchange with the atmosphere and therefore a dominant modulator of global temperature. In a March 2016 Nature Climate Change commentary (Fyfe et al.), eleven authors including climate scientists Benjamin Santer and Michael Mann persuasively “make sense of the early-2000s warming slowdown.” Their article provides evidence that directly contradicts claims that the hiatus was a conspiracy, or scientifically unfounded fiction. Several important points are made that deserve mentioning:

The recent hiatus occurred during a period of much higher greenhouse gas [GHG] forcing e.g. CO2 almost 100 ppm higher than the previous “big hiatus” slowdown in the 1950s-1970s. The authors rightly raise the question if the climate system is less sensitive to GHG forcing that previously thought or global temperatures will undergo a major warming “surge” once internal natural variability (e.g. IPO) flips sign.

The observed trends in global surface temperature warming were not consistent with climate modeling simulations. Indeed, using a baseline of 1972-2001, climate models failed to reproduce the slowdown during the early twenty-first century even as GHG forcing increased. The hiatus was neither an artifact of faulty data nor statistical cherry-picking – it was a physical change in the climate system that was measured across multiple independent observation types.

Climate scientists still need to know how variability (natural and anthropogenic) in the climate system works to attempt to model its changes through time regardless of political inconvenience.

Now back to the Henley and King (2017) piece that predicts a flip in the Interdecadal Pacific Oscillation to a positive phase will lead to almost 0.5°C increase in global temperature by 2030. Based upon the RCP8.5 high emission scenarios (which are likely to be too high themselves), those same climate models that did not adequately predict the early 21st century hiatus are used to generate so-called warming trajectories. 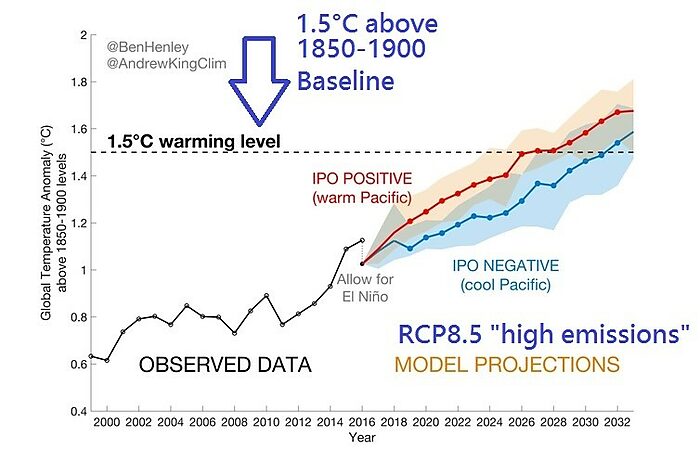 Image adapted from Henley and King (2017)

How plausible is this extreme warming scenario? Regardless of the phase of the IPO, the model projections suggest an acceleration in the warming rates considerably above the hiatus period of the last 15-years. The authors allow for 0.1°C of warming from the recent strong El Niño as the offset for the “new” starting period, but that estimate is probably too low. We calculated the daily temperature anomaly from the JRA-55 reanalysis product—a new and probably more reliable temperature record--and apply a 30-day centered mean to highlight the enormous warming step with the 2015-2016 El Niño. Only an eyeball is necessary to see at least a 0.30°C upward step now into May 2017. Note that this is not carbon dioxide warming, and if we had a strong La Niña (the cold opposite of El Niño), we would expect a step down.

Is this warming now baked in (double entendre intended) to the climate system or will we descend to a lower level during the next year or two thanks to a La Niña? In other words, will the hiatus return, another one begin, or will the upward trajectory accelerate? Oh, and did we mention that we know of no climate model that warms the earth in jump-steps followed by long “hiatuses” after big El Niños? 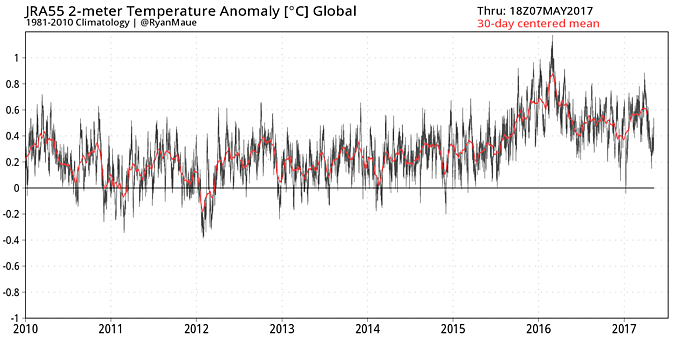