O’Brien suggests that the only reason to fear debt would be if it was leading to a financial crisis, but it isn’t because interest rates are low. But O’Brien neglects to mention that interest rates may rise substantially in coming years. CBO projects that as rates rise, federal interest costs will triple from $253 billion this year to $839 billion by 2026.

As for Ehrenfreund, he is right that $42,998 overstates the debt problem because it does not take into account our future rising population. At the same, however, $42,998 understates the problem because each year the government adds more debt. Over the next 10 years, the U.S. population will grow 8 percent, but the CBO says federal debt will rise 69 percent. So Grant’s simple debt metric will increase over time.

Other than possibly causing a financial crisis, rising federal debt creates other harms:

Wonkblog's O’Brien says he “feels fine” about today’s $13.9 trillion of debt. But how about tomorrow’s $24 trillion, as shown in the chart? And what if America has further recessions, wars, and other negative shocks, and it becomes $30 trillion? Surely, in today’s uncertain world, we want our policymakers to err on the side of prudence, and so debt growth measured in trillions makes me feel far from fine. 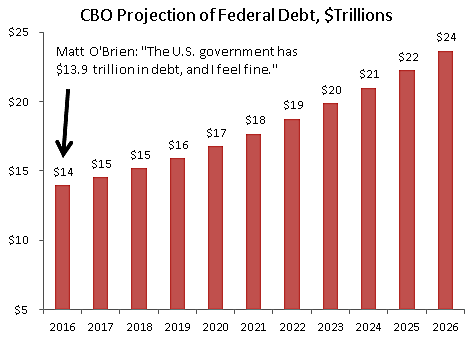 For a brief history of federal debt and why it is a major problem, see this 2015 report.