In the Acting Wife study, researchers asked elite Masters in Business Administration (MBA) students questions about their job preferences. Students were told that the answers would be provided to the school’s career center and used to place the students in internship roles.


When single women thought that their responses would be public to their peers, they answered the career center’s questions differently – for example, by indicating they desire $18,000 less in annual compensation, are willing to travel 7 days less per month, and are willing to work four hours less per week than the control group. They also reported lower levels of career ambition and less leadership ability when they knew that peers could access the information.[1]

In the observational portion of the study, 73% of single women and 61% of non‐​single[2] women reported that they had avoided behaviors that they believed would help their career — like speaking up in meetings or asking for a raise or promotion — because they were worried about looking too ambitious. In other words, women are wary of sending signals that damage their social image. 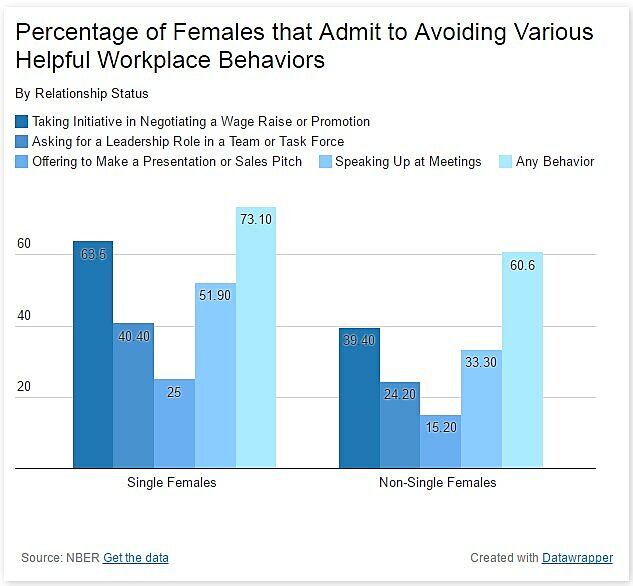 According to the researchers, the results

“…suggest that single women avoid actions that would help their careers because of marriage market concerns. Many schooling and initial career decisions – such as whether to take advanced math in high school, major in engineering, or become an entrepreneur – occur early in life when most women are single. These decisions can have labor market consequences that last long after these women get married.”

Though not addressed directly in the study, it seems probable that women that signal faux professional apathy to male peers in the marriage market may have difficulty renegotiating when domestic responsibilities become material later in the relationship. This may partially help explain why 43% of highly‐​qualified women with children leave their careers or off‐​ramp for a period of time.[3]


Although Ivanka’s $300 billion solution to women’s professional dilemmas are well‐​intentioned, mandated paid leave and tax deductions for child care are not a panacea. In fact, short of re‐​programming women and their prospective mates, the most consequential barriers to women’s professional success appear difficult to overcome through government policy.


div[1] Study results were statistically significant, and single male counterparts and married women did not behave this way.

div[2] Where “non‐​single” indicates a woman who is in a relationship, cohabiting, engaged, or married.
div[3] According to Sheryl Sandberg’s Lean In.