The latest issue of Regulation, which has just been released, examines several public health topics. 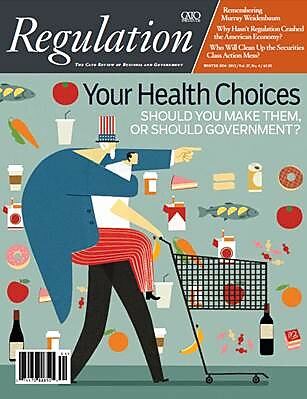 Many economists argue that “choice architects” should “nudge” Americans toward healthier decisions about their diets and physical activity. These nudges can come from government in the form of food taxes, information requirements, and other mechanisms, or through markets in the form of diet plans, reduced-calorie products, and fitness programs. Cal Poly professor Michael Marlow questions the scientific evidence supporting the governmental nudges because many promote weight-loss strategies that have proven ineffective or even counterproductive.

Cigarette taxes are rationalized as providing public health benefits.  But Professors Kevin Callison and Robert Kaestner demonstrate that because smoking rates are now so low further cigarette tax increases will have very little effect on smoking rates.  Thus future tax increase proposals cannot be justified by health benefits and instead should be debated on traditional public finance criteria.

Thomas Hemphill and Syagnik Banerjee explore the effects of some states enacting mandatory genetically modified organism(GMO) labeling.  These requirements would raise food prices nationwide by requiring fully independent food distribution networks for GMO and non-GMO foods, while implicitly and falsely suggesting to the public that GMO foods are unsafe.

An article by American University’s Lewis Grossman argues consumers are much more empowered now than 50 years ago in areas of life regulated by the FDA.  The availability of medicines—and even of information about their efficacy and use—were once tightly controlled so that only physicians would have access.  Today, an ever-growing number of drugs are available over the counter, drugmakers can advertise direct to consumers, and drug labels are intended to be comprehensible to the layman.

Two articles examine environmental policy.  Economists Art Fraas and Randal Lutter criticize the U.S. Environmental Protection Agency’s recently released Clean Power Plan for reducing carbon dioxide emissions from U.S. power plants for failing to specify how much it would lower global temperatures.  One estimate is 0.018 degrees Celsius—surprisingly little gain for such a costly and extensive rule.  Lawyers Brian Potts and David Zoppo describe the legal basis for the civil suit challenging the EPA’s authority to issue such a rule.

On more general regulatory matters, Sam Batkins and Ike Brannon examine delays in the publication of regulations in the Federal Register. Though publication can happen almost immediately after completion of OMB review, some agencies delay publication for political reasons. Pierre Lemieux asks whether the extensive regulatory burden has had obvious negative effects on U.S. economic growth.

M. Todd Henderson and Adam Pritchard describe the history of class action securities regulation.  The current system provides ripe opportunities for inefficiency and mischief because long-term shareholders pay damages and settlements in such class actions even though those shareholders didn’t profit from the alleged misstatement, while shareholders who sold during the purported fraud period (including dishonest actors) would not make such payments.  The authors propose a special arbitration procedure in the event of a fraud claim that avoids the failure of Congress and the courts to reform the status quo.

Finally Kenneth Button quantifies  the economic benefits that have resulted from the Open Skies agreement liberalizing air travel between Europe and the U.S.

For these articles and many others, including book reviews and my Working Papers column, click here.