Ninety years ago, two‐​thirds of government spending in America was state‐​local and one‐​third was federal. Today, it is the reverse with about two‐​thirds federal and one‐​third state‐​local. American government has become larger and much more centralized. That centralization has made winners and losers among the states as vast flows of taxpayer cash pour into Washington and are then dispersed through more than 2,200 federal spending programs.


In 2019, the federal government will vacuum $3.5 trillion from taxpayer pockets in the 50 states, borrow $1 trillion from global capital markets, and then turn on the leaf blower to scatter $4.5 trillion back out across the 50 states. Many billions of dollars will stay in and around Washington to pay for the leaf‐​blowing operations.


The Rockefeller Institute of Government has released a very useful report detailing these cash flows. The report calculates a “balance of payments” for each state in 2017, which is federal spending in each state less taxes paid to the federal government by individuals and businesses in each state. The winner states have a positive balance and the loser states a negative one. Federal spending includes four items: benefits (such as Social Security), state‐​local grants (such as Medicaid), procurement (such as fighter jets), and compensation paid to federal workers.


The biggest loser states are Connecticut, New Jersey, and Massachusetts. Those states have a large number of high‐​earning individuals who get hit hard under the “progressive” federal income tax.


Figure 1 below shows data from the Institute’s report. Taxes per capita are on the horizontal axis and spending per capita on the vertical axis. Each dot is a state. The totals allocated for 2017 were $3.1 trillion in taxes and $3.8 trillion in spending, leaving out five percent of taxing and spending that could not be allocated by state. 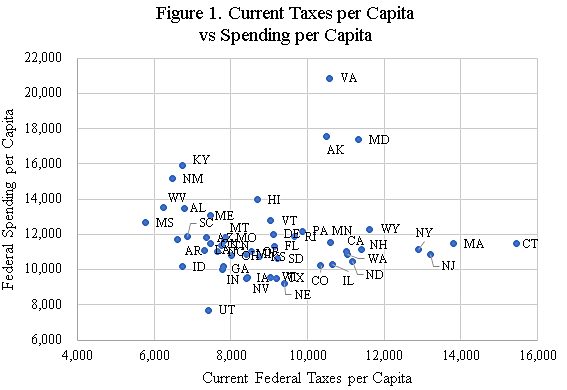 Generally, states on the bottom right are the losers and those on the top left are winners.


Connecticut is on the far right paying $15,462 in federal taxes per capita but receiving only $11,462 in federal spending. Connecticut would be better off in a decentralized United States with citizens paying most of their taxes to state and local governments rather than the federal government.


Every state is actually worse off than indicated in Figure 1 because federal borrowing in 2017 allowed spending to be 20 percent larger than taxes. But borrowing is not a free lunch. It creates a cost that will hit residents of every state down the road—borrowing is just deferred taxes.


For Figure 2 below, I scaled up federal taxes to include both current and deferred. That is, I scaled up taxes for each state the same percent so that total federal taxes for the nation equals total federal spending. With that adjustment, Connecticut residents paid $18,586 in current and deferred taxes per capita and received only $11,462 in spending. Connecticut residents are only getting back 62 cents for every dollar owed to Washington. 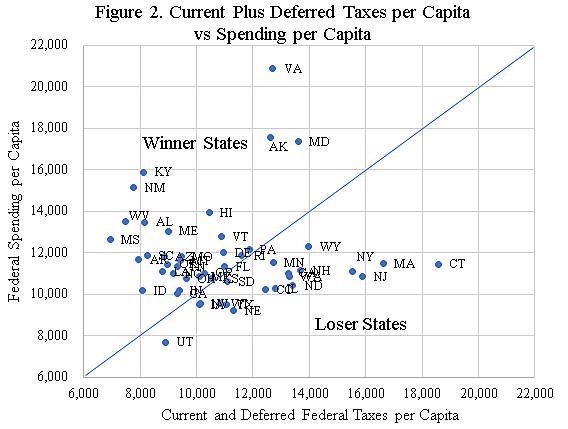 The patterns exhibited in the figures have persisted for decades. High‐​income states such as Connecticut have been penalized by the overly progressive federal income tax for a very long time. The interesting political question is why do they stand for it? Why do members of Congress from high‐​income states support a highly progressive federal income tax that particularly harms their own states?