Governor Andrew Cuomo announced yesterday “a dramatic drop in state income tax revenue of $2.8 billion.” More high earners appear to be leaving New York than expected in response to the 2017 federal tax reform. “Cuomo said the law’s cap on deductions for state and local taxes at $10,000 was to blame and suggested it is, anecdotally, triggering high‐​earners to leave New York.”


Newsday notes, “Cuomo blames Trump and his 2017 tax cut legislation for prompting New York’s wealthiest taxpayers to change their legal address to another state to avoid a big federal tax hit. He said he bases this on anecdotal stories, not hard facts yet, but that the behavior of just a few thousand of these high‐​earners could have a significant impact on state revenues.”


One way to get a real‐​time glimpse of migration patterns is to see where real estate prices and purchases are rising and falling. The Wall Street Journal reports:

A growing list of public officials in high‐​tax states are expressing alarm that big earners are bolting to low‐​tax states as new data suggests some home buyers are moving in response to the year‐​old change in the federal tax law.


… Preliminary data show a jump in Florida home purchases by buyers from high‐​tax states. Home values in lower‐​tax areas have been rising faster than those in places where limiting the ability to deduct high state and local taxes eroded some of the savings from the federal tax reduction, according to an analysis by real estate and data firm Zillow.


One of the biggest winners from this shift has been Miami. The city is experiencing more activity than usual from buyers living in states like New York, New Jersey and Illinois. People are drawn to the city by mild weather—as always—and by deals on condos and lower taxes.


… While high‐​end condo prices in Miami have flattened out or even declined a bit in recent months as foreign buyers have pulled back, the market is holding up much better than New York City’s. Manhattan co‐​op and condo sales last year were down 12% from 2017 to their lowest level since 2009, a Wall Street Journal analysis found.


… Nelson Gonzalez, a senior vice president at EWM Realty International in Miami, said that in the past year most of the buyers for high‐​end listings that he encounters are from high‐​tax states in the U. S.—a big change from several years ago when he mostly saw foreigners. “Ninety percent of all the deals over $10 million were tax refugees,” he said.


… “A lot of rich people are trying to find a way out of New York,” said Barry Horowitz, an accountant who specializes in helping clients switch residency to lower‐​tax states.


… Carney Shegerian, a 54‐​year‐​old lawyer from Los Angeles, recently bought a three‐​bedroom condo in the Aria on the Bay tower in Miami for about $1.5 million. He said he plans to move there permanently and open a new branch of his law practice. The unit “is a great value compared with what you’d get in Los Angeles,” Mr. Shegerian said. And the lack of income tax in Florida is “attractive to anyone,” he said.

These new moves have likely strengthened existing migration patterns, which are shown in the chart. Each blue dot is a state. The vertical axis shows the mid‐​2017 to mid‐​2018 Census net interstate migration figure as a percentage of state population. The horizontal axis shows state and local household taxes as a percentage of personal income. Household taxes include individual income, sales, and property taxes. The red line shows the fitted relationship between the two variables.


On the right, most of the high‐​tax states have net out‐​migration. The blue dot on the far right is New York with a tax burden of 13 percent and a net migration loss of nearly 1 percent (0.92) over the year.


On the left, nearly all the net in‐​migration states have tax loads of less than 8.5 percent. If policymakers want their states to be attractive, they should reduce their household tax burdens to 8.5 percent or less of personal income.


Governor Cuomo recognizes the out‐​migration problem, but what will he do about it? Newsday says that he is considering spending cuts to balance the state budget, which would be a good start.


The new federal tax law should be a wakeup call for out‐​migration states to improve their tax climates and trim their governments. High‐​tax states should aim to create simpler, lower‐​rate tax codes and improve the quality and efficiency of government services. 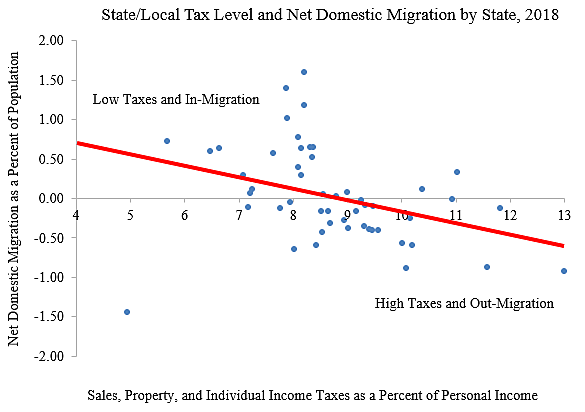