The federal government does a lot of things poorly, including trying to run businesses such as an electric utility, a postal system, and a railroad.


After the government helped ruin private passenger rail in the post‐​WWII years, it took over the remaining passenger rail routes in the 1970s under the Amtrak brand. Amtrak was supposed to become self‐​supporting, but it has consumed tens of billions of taxpayer dollars over the years.


Today, Amtrak operates 44 routes on 21,000 miles of track in 46 states. Amtrak owns the trains, but freight rail companies own nearly all the track. A Pew analysis found that Amtrak loses money on 41 of its 44 routes, and an analysis by Randal O’Toole found similar results. More information is here and here.


The few routes that earn positive returns are in the Northeast, and the biggest money losers are the long‐​distance routes. That brings us to a story in the Wall Street Journal regarding Amtrak head Richard Anderson’s current efforts to stem the losses.


Will Congress let Anderson cut money‐​losing routes or will it continue to put parochial interests above the system’s overall soundness?

Seeking to attract millions more passengers, Amtrak is preparing an overhaul of its national network targeting increased service in the South and West—at the expense of long‐​haul routes beloved by train buffs and their allies in Congress.


The goal is to revamp the way Amtrak runs trains on the aging network of national routes it already maintains, with more frequent service between pairs of cities, such as Atlanta and Charlotte, N.C., or Cleveland and Cincinnati. Running more trains over shorter distances would allow Amtrak to better serve those commercial corridors where rail can compete with flying and driving, railroad officials said.


The new service could come at the cost of curtailing some long‐​distance routes, where storied trains like the Empire Builder and the Southwest Chief have small but fervent bases of support and lineage stretching back to the golden age of U.S. railroads. Any change in Amtrak’s management of the national network will require approval from Congress, which has aggressively defended the long‐​distance routes in the past, even while pressing Amtrak to focus on improving its financial performance.


Amtrak’s long‐​distance routes carried about 4.5 million riders in fiscal 2018, down slightly from the previous year. Amtrak reported an adjusted operating loss of $543 million on those routes in 2018, more than offsetting the $524 million in earnings coming from its operations on the Northeast Corridor.


… “The present network simply does not fit the future,” [Anderson] said.

Anderson is right. But the best fit for the future would be a privatized Amtrak. Privatization would allow for innovation and cost‐​cutting to improve service and make rail more financially viable. A private rail company (or companies) could prune excess workers and end harmful union rules. It would be able to close the routes that are losing the most money and shift resources to the core routes to improve service quality.


Congress should get out of the passenger rail business and give rail the private‐​sector flexibility it needs to better compete against other transportation modes. 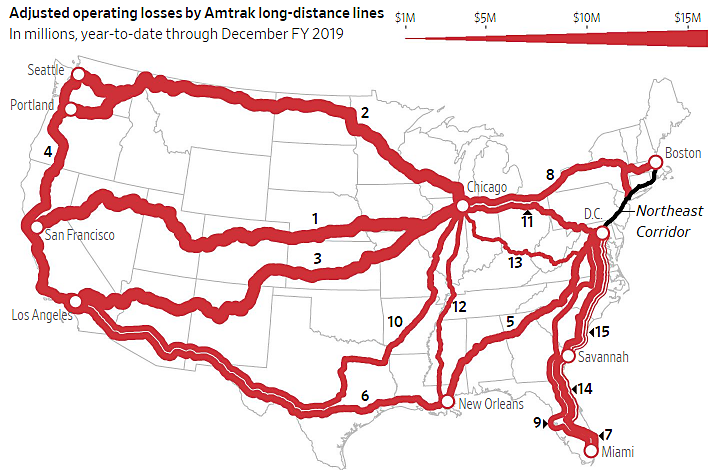