Why Trump’s Immigration Position Is Hurting Him

The issue of immigration handed Donald Trump the Republican nomination. His style of communication, emphasis on the issue, and seemingly simple solutions courted, converted, or imported a core group of GOP voters to support his candidacy. Many expected Trump to moderate his immigration stance after winning the nomination, but Trump doubled-down on his anti-legal immigration position at a recent speech in Phoenix. This election is a great test of whether Americans will vote for a candidate whose substantive policy focus is immigration restrictionism.

Should immigration be kept at its present level, increased, or decreased? 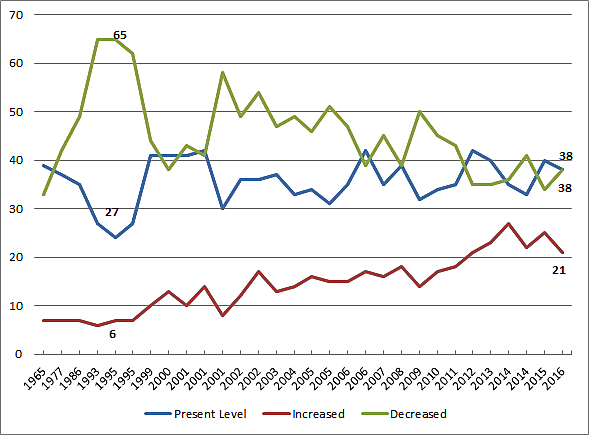 Trends prior to Trump entering the race did not show a surge in nativist opinion – just the opposite. Respondents in the Gallup survey have become more pro-immigration over time. Lest you think this is a weird quirk confined to Gallup, other polls conducted by the General Social Survey, New York Times-CBS, and the American National Election Survey have all found similar results.

Trump’s immigration position was successful in the GOP primary but is facing more trouble in the general election because the partisan differences in this issue are massive. Pew recently found big shifts in national and partisan responses to immigration. As expected, Americans think immigrants add more to the United States than they did in the mid-1990 (Figure 2). 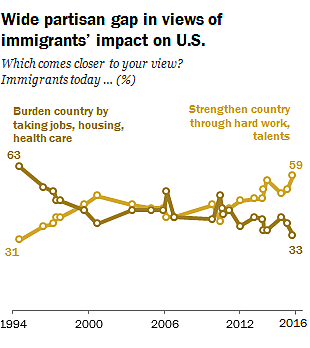 From 1994 to 2006, Republicans and Democrats held similar views on whether immigrants strengthen the country but then diverged greatly (Figure 3). By 2016, 78 percent of Democrats thought that immigrants strengthened the country while only 35 percent of Republicans agreed. Republicans are not more anti-immigration than they used to be – they just appear that way because Democrats have become much more pro-immigration than they were. The partisan divergence on this issue helps explain how Trump won the GOP nomination but is not doing nearly as well in the general election. 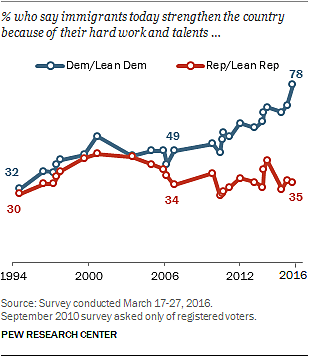 Gallup has only released one poll asking this question since Trump became the Republican front-runner. From 2015 to 2016, the respondents changed their opinion by becoming slightly more opposed to liberalization and more supportive of shrinking or maintaining present levels (Figure 4). This shift in public opinion is small. Immigration opinion shifted more between February and June of 2014 than in the year since Trump has been hammering this issue publicly. At most, Trump has nudged the needle back to the opinion levels of 2012 – a year before the big immigration push in the U.S. Senate.

Shift in Gallup Responses since the Rise of Trump 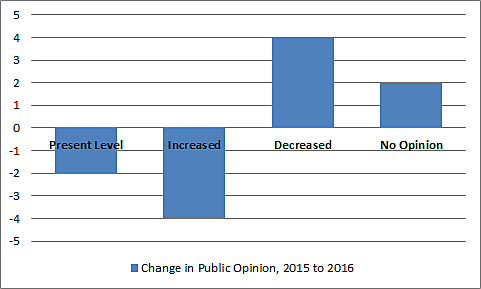 Immigration restrictionism increasingly appeals only to a shrinking percentage of the electorate that is concentrated in the Republican Party. Crucially, Republican respondents are not more opposed to immigration than they used to be. The rise of Trump does not reveal a political opportunity for future Republican politicians in general elections, but instead should warn them that the issue may help in winning the nomination but not in the general election.