Why Measles Making the News Is a Sign of Progress

A set of measles outbreaks in Washington state, New York City, and elsewhere, is making national headlines and frightening parents around the United States. Counter‐​intuitively, measles making the news is a sign of progress. Not long ago, measles was so common that it was simply not newsworthy. Suffering from the extremely infectious disease, which causes spotty rashes and a hacking cough, was widespread and often deadly.


It was once the case that even royalty fell victim to diseases now easily preventable with routine shots given during childhood. Measles killed the un‐​vaccinated King Kamehameha II of Hawaii, and his queen, Kamamalu, in the 1800s. A century prior to that, King Louis XIV of France lost his brother, son, grandson, and great‐​grandson to smallpox. Smallpox once claimed approximately 400,000 lives annually in Europe in the late 18th century, and in the 20th century, it caused hundreds of millions of deaths around the world. Thanks to vaccines, smallpox was eradicated in 1980.


As recently as the late 1950s and early 1960s, nearly twice as many children died from measles as from the polio disease. Thanks, once again, to vaccines, polio was eliminated from the United States in 1979.


Recent coverage by the Washington Post of the current measles outbreaks contains an amazing anecdote of a measles victim’s visit to a doctor: “the doctor, who had never seen measles, misdiagnosed the man’s fever and cough as bronchitis.” That measles is now so rare that even a trained medical doctor cannot recognize it, when just a generation ago it was a common childhood ailment, is truly a triumph of medical progress. 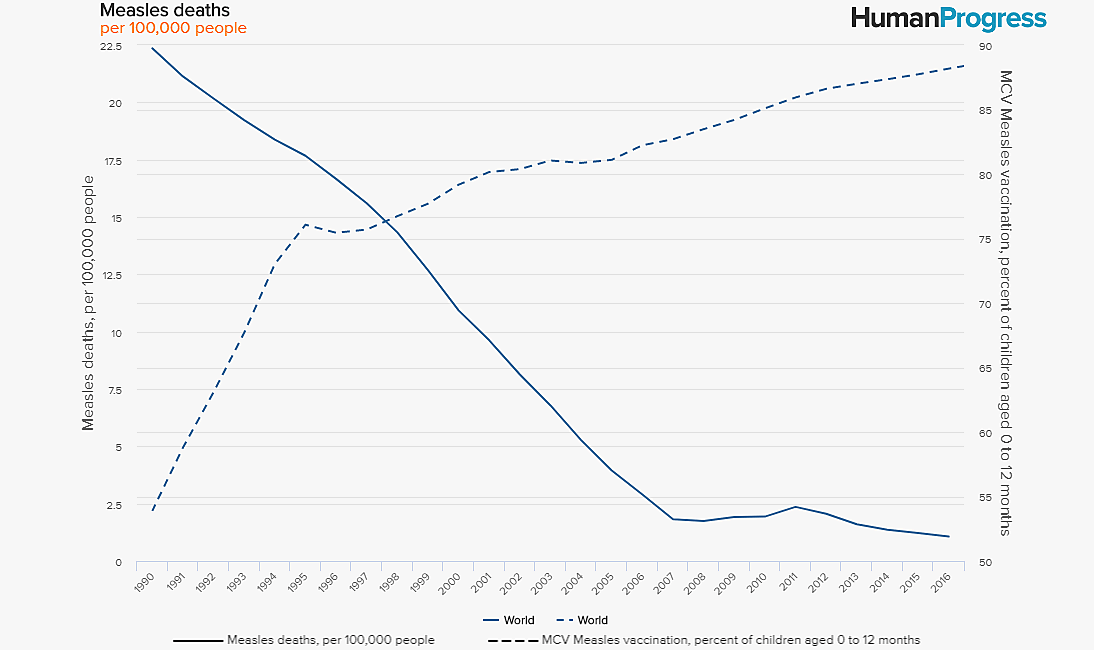 As recently as 1990, measles caused over 22 deaths per 100,000 people globally. Thanks to the measles vaccine and rising global vaccination rates, that figure fell to just over 1 per 100,000 people by 2016, the most recent year for which there is data. That represents a decline in measles deaths of over 95 percent.


The current uptick in measles cases is troubling. But the fact that measles cases are making the news at all is a testament to medical progress.