Who’s Going to Buy All the U.S. Treasuries?

With Uncle Sam having to sell trillions of dollars worth of treasuries to finance all of the bailouts, stimuli, and normal wasteful spending, no one is sure whether foreign demand will continue.  The Chinese have bluntly questioned the safety of their U.S. holdings, and foreign demand has fallen in recent months.  Writes Brad Setser:

I wanted to highlight one trend that I glossed over on Monday, namely that foreign demand for long-term Treasuries has disappeared over the last few months. Consider a chart showing foreign purchases of long-term Treasuries over the past 3 months. Incidentally, the split between private and official purchases in this data should largely be ignored. The revised (i.e. post-survey) data generally have attributed nearly all the flow from 2003 to the official sector. 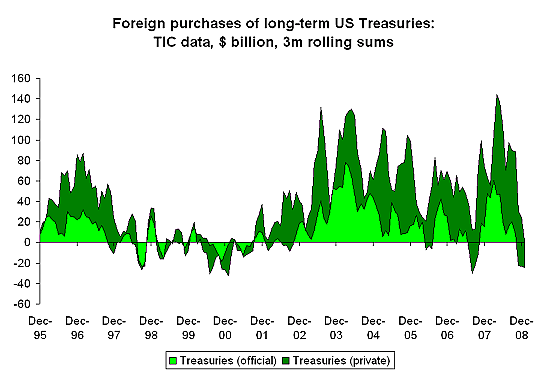 It's difficult to accurately predict future demand.  But U.S. borrowing will be truly staggering in coming years.  If international demand is down, the Treasury will have to rely on American investors.  Whether the domestic market can easily absorb so much debt -- and particularly, to what extent federal debt offerings will crowd out private investment during what we hope will be a recovery -- are questions that our spendthrift leaders have not bothered trying to answer.